Katie Jane Garside first hit the scene in 1989 as the front woman for Britain's alt-rock riot band Daisey Chainsaw. Drawn into the band by guitarist Crispin Gray, Katie Jane was soon commanding crowds with an uncompromising sound and an equally raucous stage show. After the success of their hit album, LoveSickPleasure, she left Daisy Chainsaw in 1993 to push on and evolve her style. 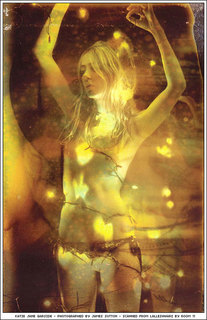 In the years following, she honed her skills with indy bands like Queen Adreena and Test Department while always pushing the razor's edge with her own solo projects Lalleshwari - Lullabies In A Glass Wilderness and Corps Electriques. And then, in 2006, she found a lost soul named Chris Whittingham busking in the tubes of London. The two quickly meshed, and within a year they released their first experiment into the world under the name Ruby Throat.

Ruby Throat’s debut album The Ventriloquist was released in November 2007 with a limited run of only 500 copies. Each copy was produced as a book bound from vintage Indian red leather with the CD held safely in a cloth pocket tucked in the back.

What we love about Katie Jane is the honesty of her work.

Here's a glimpse behind the mindset of The Ventriloquist...

"...The Album is done, the indian recycled leather sachets are piled on floor, and we just have to put it together and finish it. But I don't want to. When it's done that might be it. a year and a half recording (probably longer), writing, re-writing, ditching, resurrecting....and there it is. CD. disappointing. not like it was in the room...the first time, songs reeling out, the evenings passing on. But then, music was never meant to be recorded. we've done our best...no engineers...just friends studios as home. But, you know, it's close. mostly first takes. and mostly improvised. A beam from somewhere else. but now we have to sell it." 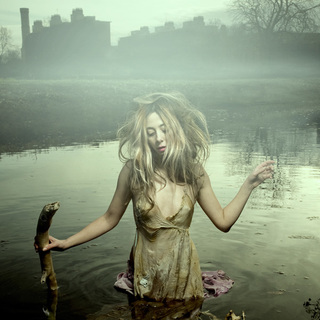 As a motley of artists, we always cheer for those who can follow the muse without being trampled under the machine. What can you tell us about the early days? Where did you hone your chops before finding the limelight and what inspired you to dive into music field?

i spent my formative years living on a 33ft boat and sailing around the world with my family, as a 12 year old i did the 'dogwatch' alone, 2am to 6am, with infinity above me and six miles of ocean below, the incomprehensible vastness insist that child acknowledge an inner world, this inner world is not ephemeral, it is highly coloured and clearly defined, populated by any ever changing cast, my so called 'muse' is not separate from me, it is 'me' and its all i have, i have done some terrible things to her but nevertheless she has not deserted me, goes quiet sometimes to escape noise but always there

Beyond music, have you stretched into any other genres; film, illustration, photography? the ongoing genre i suppose is the effort to keep skin stretched about the rib cage involving an evolving body of evidence, lost ends, new beginnings, a cross fertilization, hybrids and monsters, a kind of paper trail though it isn't linear, i make marks and cave paintings, skin movies on mobile phones and cuts in the fabric that i might see through

Your work with Daisy Chainsaw stretched through the whole first generation of alt-rock and grunge. What kept you moving, and what kind of goals were you shooting for?

foot to the floor with the brakes on makes a terrible friction, so involving, that one day you wake with your skin all gone, no hair and the wind shrieking, eyes won't focus and you wonder who had been driving the bus, the past is informed by the present so make of it what you will

I read about how you met Chris performing in the Tube. Now, I'm sure you've seen your fair share of organ grinders, out of work magicians, and dancing monkeys, so what was Chris doing that made you stop and take notice? Was it an easy friendship?

this man's imperative brings the wild ocean of the south pacific to the london underground, i could do nothing but immerse and fall in love

He's definitely been a good influence. After seeing The Ventriloquist, I'm astounded at the level of craftsmanship and the amount of work that went into constructing not just the music, but the art and the detail of the whole experience. How did that whole idea get started, and what inspired you to push it beyond being a typical CD once the music was recorded?

there is a tedious truism applicable: our work is more than the sum of its parts, we are both always astounded at what makes itself known through our application, if you open yourself up to the work it informs you there, is no 'end game', i am not a visionary, i let go and ask that 'it' realize itself through me, an inbreath/wingspan so huge, these are just a tiny handful of threads that make their way back through

When I see artists like Ruby Throat putting so much time and work into a CD, I pause and wonder about our culture's recent push to digital music.

Back in the day, you could really latch onto a song because you didn't have much else to listen to at home. Live shows were fleeting, meant to be experienced in the moment, but a truly hot album had time to burn into you. Now that MySpace and iTunes have become the norm, artists are being judged in 30 second clips if they don't find themselves drowning in the virtual ocean first.

I have to say, it was a ballsy step for you and Chris to come out with The Ventriloquist. It's like you stepped up and said, "Stop a moment. Consider the fact that you're holding something real. This is more than random noise designed to fill your elevators and lobbies. It's more than data that can be deleted with your next hard drive crash. What you're holding is made by a real person, and its special."

Was that your drive originally, or did you just see the idea in your head and want to bring it to life?

that man is the noise in my head, one day he erupted out of my unconscious, even in the darkest places there is a 'way'

A lot of people take comfort creating things that stay inside the a box of what we consider normal. It's a safety net of mediocrity they can fall back on when times are rough and inspiration runs thin. On the other side, some crash and burn without that net. What kind of challenges have you faced by being so free with your art? Do you have other artists that you can rely on for support?

a solipsistic whispering means there is no one else, i am answerable to myself alone, a desolate boundless freedom

Do you have any words of wisdom for the artists here at Dieselpunks so they can learn from your experience?

unless that tiny voice forces you to your knees, leave well alone (and test it and continue to test it) but we all know that don't we?

What can we look for next from Ruby Throat and how can your fans stay in touch?

[next up is] 'out of a black cloud came a bird'

Thank you so much for all of your time today, Katie Jane. I really appreciate it and hope to hear from you soon.

Tome, thankyou and deiselpunks so much for your kind attention, i wish you all the best in all things

Feel free to use our website to help promote your work whenever you need to. You're an icon of the DIY culture and we love you for it.

For more information about Ruby Throat and the new album, out of a black cloud came a bird, check out Katie Jane's websites at: