It was ordered as a successor of the mighty five-turreted T-35, world's heaviest tank of the Interbellum. The SMK (Sergey Mironovich Kirov, after a prominent Bolshevik leader assassinated in 1934) was to meet the requirements that were put forth by the Directorate of Armed Forces (ABTU) in November 1937. These requirements called for a tank that could withstand shots from a 76.2mm gun from 3,937 ft (1,200 m). It was also to be powered by a diesel engine as it was felt gasoline was too dangerous in case of hit. The requirements also called for a tank with five turrets. In 1938 the SMK was designed by Colonel Zh. Kotin (chief engineer of the Kirov Works in Leningrad) to replace the T-35. The initial study featured three turrets - the main one with a 76.2mm gun and two smaller offset ones with 45mm: 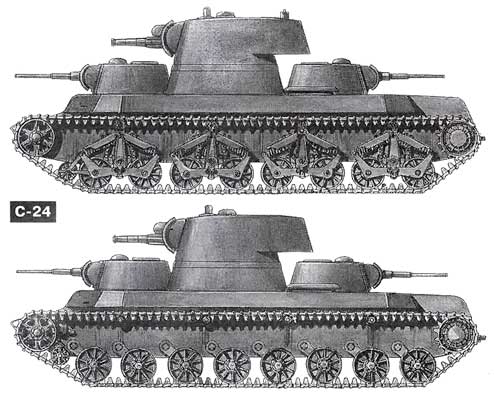 But this design was soon revised and the final layout had a 76.2 mm gun in the main turret and a 45mm in the lower turret, centerlined. This layout was virtually the same as it's competitors, T-100. The engine was based on a German BMW aircraft engine.

On May 4, 1938 the designs for the SMK and T-100 were presented to a joint committee from the Politburo and Defense Council. Both were approved to build prototypes. 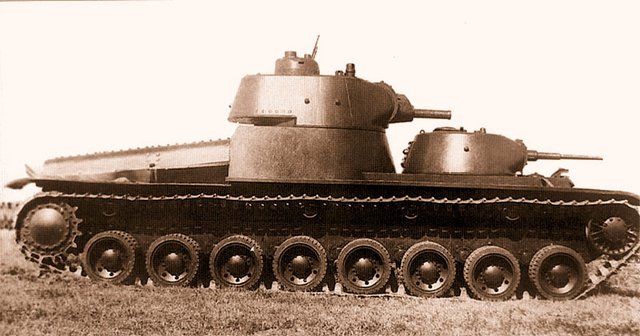 The SMK prototype was completed in August 1939. It was sent to the Kubinka testing grounds outside of Moscow. The SMK was tested alongside the T-100 and KV-1 prototypes. 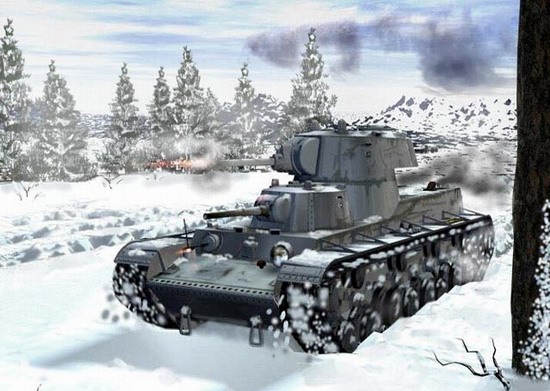 The SMK was used in the Winter War with Finland. The T-100, SMK, and KV-1 prototypes were a part of the 91st Tank Battalion of the 20th Heavy Tank Brigade and had their first combat near Summa from December 17 to 19.5

On December 19 the SMK and T-100 were joined by five T-28s and Red Army infantry. The SMK was immobilized by a mine which blew off one if its tracks. It was then found that during the repairs, under fire from the Finns, that the engine wouldn't restart. The T-100 was hooked up to it to try and tow it out of fire. But this was difficult in the icy conditions. The SMK was eventually abandoned when the covering forces started to run low on ammunition. The SMK wasn't recovered until February 1940 when the Red Army broke through the Mannerheim Line. Now to another 'land cruiser' (not to be confused with the British Cruiser tanks), the T-100 (see above). It was designed by a team led by N. Barykov at the Bolshevik Works Experimental Design Mechanical Section (OKMO), in Leningrad. Very few T-100s were built.

There were attempts to use the T-100 chassis as a platform for an 6in howitzer carriage (T-100Z):

and for self-propelled guns (here's one of several designs, the SU-100Y, armed with a 130mm naval gun):

Both 'land cruisers' were declared unsuitable for service. The winner in the competition was the KV (Klim Voroshilov, after the People's Commissioner of Defense), a conventional machine, less Dieselpunk-ish but much more reliable than any of two other contestants.

There's more images in the album. You can also enjoy the slideshow:

Comment by Larry on March 9, 2010 at 7:28pm
Fascinating tanks. And great images. Thanks for posting this, lord_k