Knights of the Air: Poetic Bombers

These guys, standing in front of Caproni tri-motor, are the most famous Italian bomber pilots of the Great War. 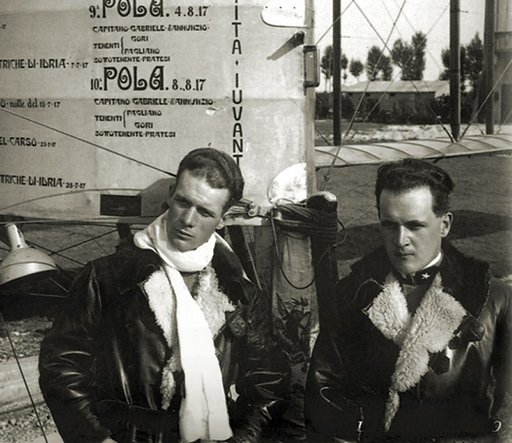 Maurizio Pagliano (right) was born in Porto San Maurizio, Imperia on October 11, 1890 from Italian father and German mother. He begun the war with the rank of lieutenant and immediately distinguishes himself as an expert pilot on Caproni bi- and tri-motors. In less than two years he performed many missions on Austrian military bases, airports and ports. In the most critical period, the summer, he attacked several times at a very low altitude enemy encampments, columns and . Testifies his daring some of the most important missions of the war, conducted with the help of his inseparable second pilot and friend lieutenant Luigi Gori (left). 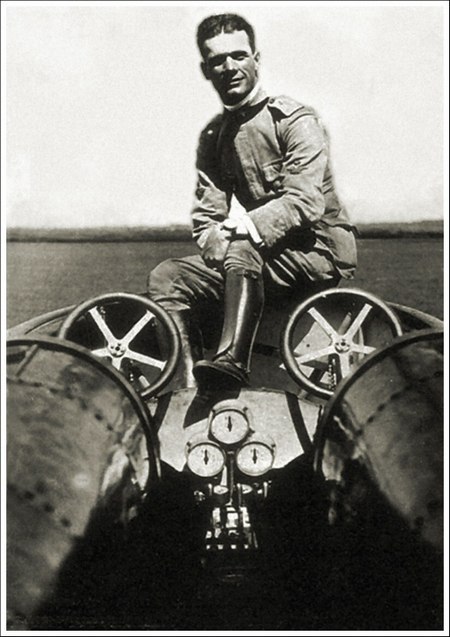 Luigi Gori (above) was born at Pontassieve on March 13, 1894. He joined the Royal Engineers and then was assigned to the Battalion of Cadet Pilots based in Turin. On May 3, 1915 he was appointed Second Lieutenant. The young officer shows now a great ability as aviator and became first a good instructor and later chief pilot of Barman and Caproni aircrafts. 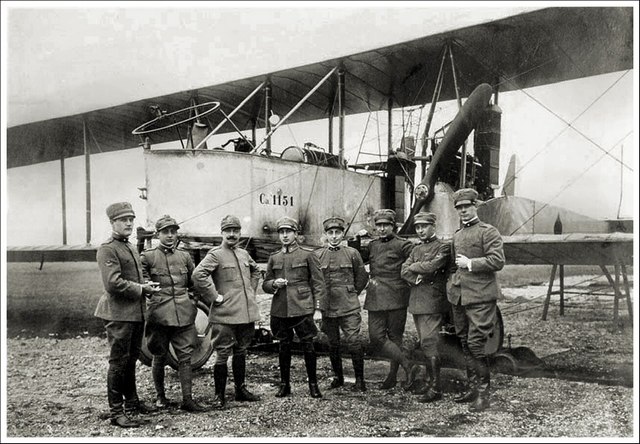 In early 1917, two young pilots of the 8th Caproni Squadron became brothers-in-arms with Gabriele D'Annunzio - great Italian poet, novelist, dramatist, adventurer, aviator and self-proclaimed Superman, a sort of proto-Dieselpunk hero. He was thinking about long-range missions over Austria and Vienna. His name is clearly seen on the title photograph, inscribed on Caproni fuselage. Here's a portrait of the poet by Russony: 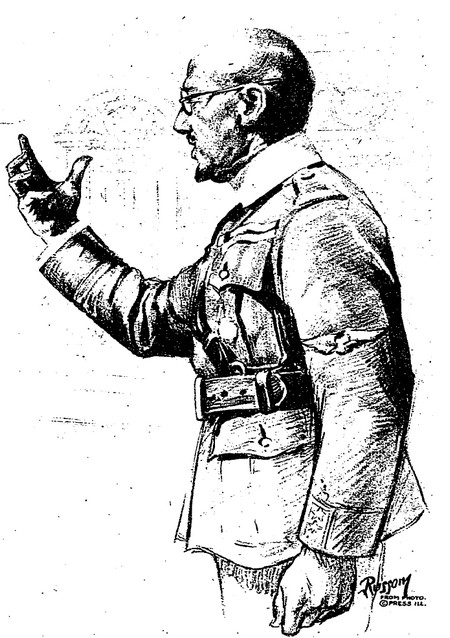 Pagliano and Gori were D'Annunzio's pilots during three memorable missions against Pola, the Austrian fortress (March 2, April 3 and August 8-9, 1917) and the fortified naval base of Cattaro (October 4, 1917). They started from Gioia del Colle, Bari flying the Caproni Ca.3 SN.2378 San Giorgio with the "Ace of Spades" emblem painted on the nacelle.

"The Electrocuting Eagle" Comina's Squad emlem with the "Closely and from afar she strikes" motto: 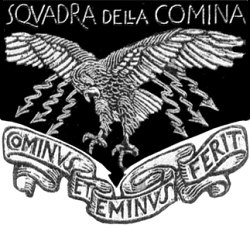 Another heroic mission was conducted the night of May 10, 1917 when Pagliano and Gori were the first to fly the round-trip Pordenone – Pola, an unescorted solitaire action in low visibility conditions. The released ten bombs, type "162" (25 Kg each), hitting with precision the military installations of the fortress, demonstrating a great ability to conduct long-range night bombing missions. On May 13 they ground-attacked the enemy troops and returned to the base with almost 134 bullets in their Caproni. 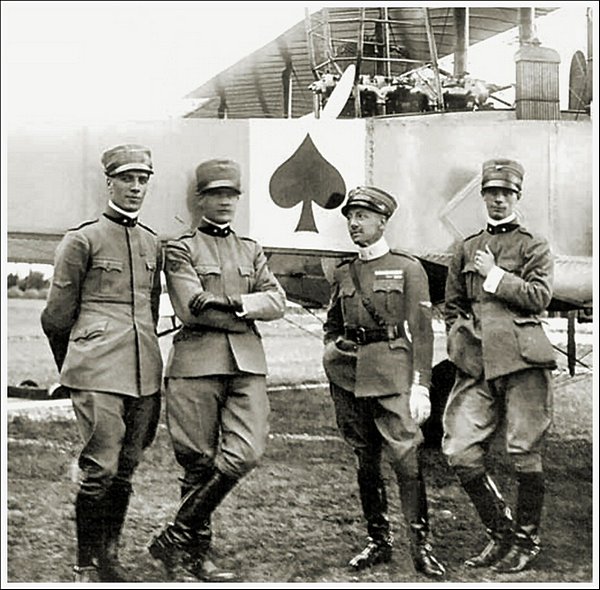 On September 4, 1917 flying a Caproni C-3 Pagliano, Gori and D'Annunzio started at 8:10 in the morning from Comina Airfield (Pordenone) head towards Turin and landed back at 17:23 after a non-stop flight of more than 1,000 km.
8th Squadron servicemen in front of the legendary Ca.2378.Gabriele D'Annunzio (center) and at his left (from our point of view, at his right) - Luigi Gori and Maurizio Pagliano: 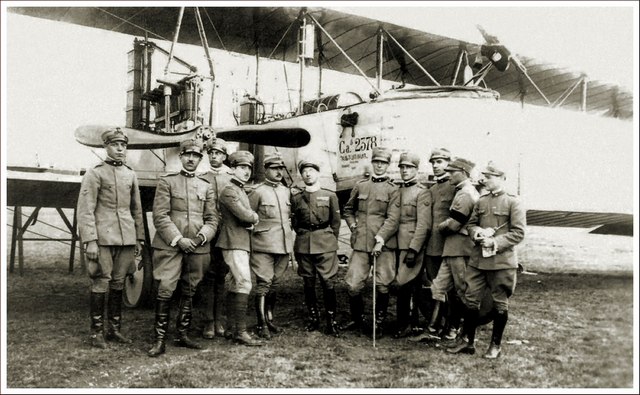 D'Annunzio's dream, the flight over Vienna, in fact never took place with Capronis but only a year later, on August 9, 1918 with ten SVA Fighters of the "Serenissima" Squadron. The defeat of the Italian forces at Caporetto changed the fate of Italy. Pagliano and Gori were engaged in the strenuous defense on the Piave river. Both were awarded with their third Silver Medal of Valor. The previous two Silver Medals were obtained for their feats in 1916 and for the night bombing mission over Prosecco Nabresina on June 24, 1917. 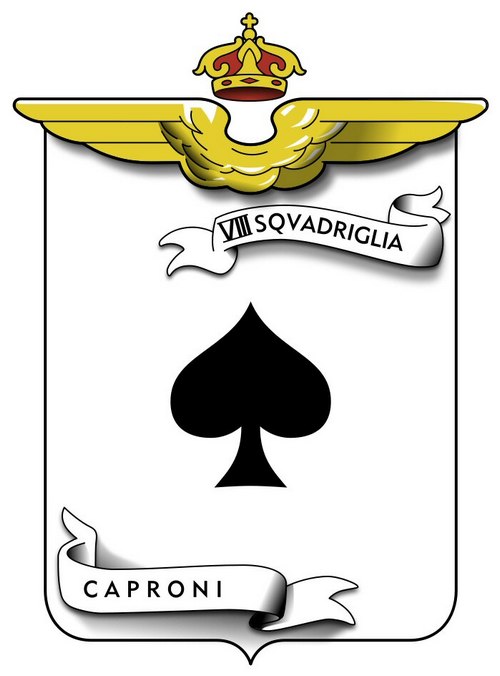 On December 30, 1917 the "Ace of Spades" didn't return to the base. Pagliano and Gori took off at 11:45 AM from San Pelagio with the Ca.3 SN.4216 for a bombing action behind enemy lines against the airfields of Godega Sant’Urbano and San Fior.
Flying back home, south of Susegana, the aircraft was seen to go down over the enemy lines. The Italians hoped that the airplane had been forced to land in a field - so Pagliano, Gori and their gunners James Rennet and Arrigo Andri were captured. But a few days later the Imperial and Royal Army Command reported to the Red Cross that "on December 30 at 12:40 a Caproni was shot down in flames south of Susegana (Treviso ) and all the members of the crew were found dead". As described in the Austrian archives, the bomber was shot by Benno Fiala von Fernbrugg (below), commander of the Flik 56 / J, flying an Albatros D.III 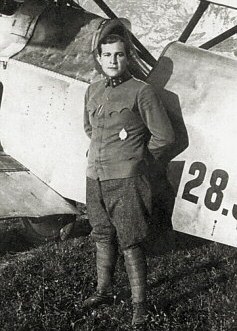 D'Annunzio wrote "honor for the heroic couple, for life and death!" His bold assault at the Austro-Hungarian naval base, remembered as the "Buccari Mockery" (February 10-11, 1918), was, in the poet's own words, "dedicated to my two disappeared young pilots who demonstrated to the doubters how recklessness is only one side of prudence ..."

P.S.: HYPOTHETIC RECONSTRUCTION OF THE TRAGIC EVENTS
After the attack with other four Caproni bombers on the Austrian airfields of Godega and San Fior, along the street between the two airfields the Caproni 4216 left the squadron. Unlike the Capronis 4145 and 2337 that maintained the altitude of 3600-3200 m, the airplane of Gori and Pagliano flies low moving West to attack enemy troops reported in this area. Many times the two pilots used their Caproni as a ground attack aircraft flying at an altitude of 100 m or even less. While Corporal Karl Haselböck, the ace Benno Fiala-Fernbrugg's buddy was engaged in fighting other Capronis and their escort, Fernbrugg attacked the Ca.4216. Maneuvering during combat at low altitude, the Ca.4216 flies southwards (Susegana). This maneuver is left unnoticed by the other Caproni pilots engaged in combat. Probably other Austro-Hungarian fighters took part in hunting Pagliano's and Gori's Caproni (Major Bonazzi reported three enemy planes). At last the 4216 was hit and crashed to the ground in flames. This time, the Schwarzlose machine gun and the phosphorus munitions, so often criticized by the Austrian pilots, did their job successfully setting fire to Caproni fuel tanks.

Comment by lord_k on October 23, 2010 at 6:46pm
My pleasure, Larry.
I'll prepare at least two more posts about Regia Aeronautica. Their Ca.3, looking so weird, was Allies' best bomber in the Great War.

Comment by Larry on October 23, 2010 at 6:41pm
Great photos and really interesting details. Thanks so much for posting this.