Knights of the Air: R-planes

German Riesenflugzeuge (giant airplanes) were the largest and most complicated bombers of WWI. 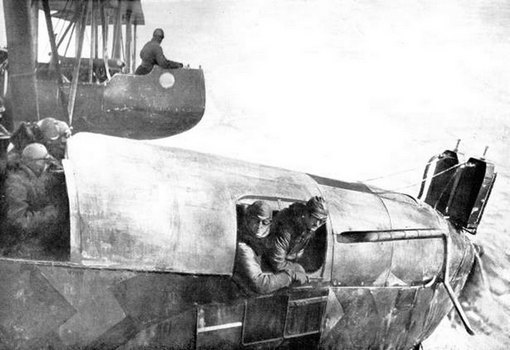 Their story begins as early as in August 1914 when Villehad Forssman, a Swedish engineer who worked in Germany for Prince Sigismund von Hohenzollern, started to build a close copy of the Russian Ilya Muromets. This experimental 4-engine plane, known as Siemens-Schuckert Forssman, appeared underpowered and was extensively rebuilt. Finally, the German military accepted it as a trainer in early 1916 when it was already obsolescent.

Another Siemens-Schuckert experimental bomber (shown above and below), designed by Steffen brothers, made its first flight on May 24, 1915. It is believed to be the first "true" R-plane, with 28-meter wingspan and 500 kg bomb payload. Armed with one machine gun and powered by three 150 hp Benz BzIII engines, the R.I set the pattern for later Siemens-Schuckert bomber types. All of them (save R.VIII) were powered by three engines mounted in the forward compartment of the fuselage driving two tractor propellers mounted between the mainplanes via clutches, shafts and gearboxes. The large forward compartment also housed the crew of between four and six in an enclosed cabin and open gun positions. Attached to the forward compartment were triangular section diverging booms, top and bottom, which supported the tail section, allowing the rear gunners, in positions between the boom attachments, a wide field of fire. With increased dimensions and power (R.VII, built in 1917, had 38.4-meter wingspan and was powered by three 260 hp Mercedes DIV engines) they took the same payload and reached the same maxium speed, about 130 km/h. 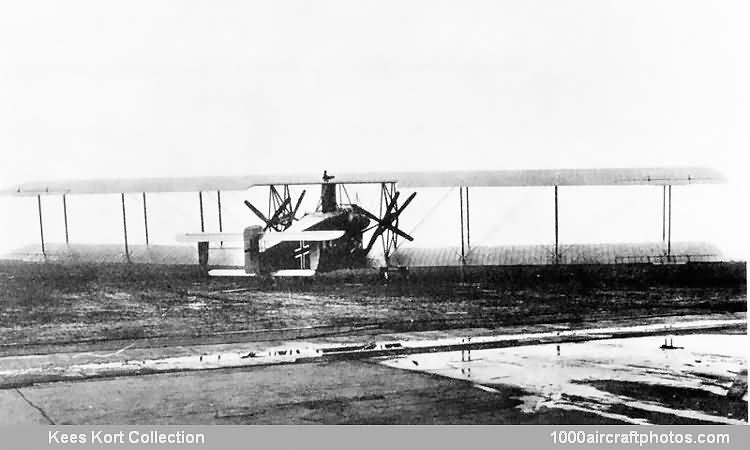 The military, however, preferred a different heavy bomber concept, credited to no other than Count Ferdinand von Zeppelin and looking much more sophisticated than its Siemens-Schuckert contemporaries. The first Zeppelin bomber was built at Gotha experimental factory (Versuchsbau Gotha-Ost, hence the V.G.O. designation). 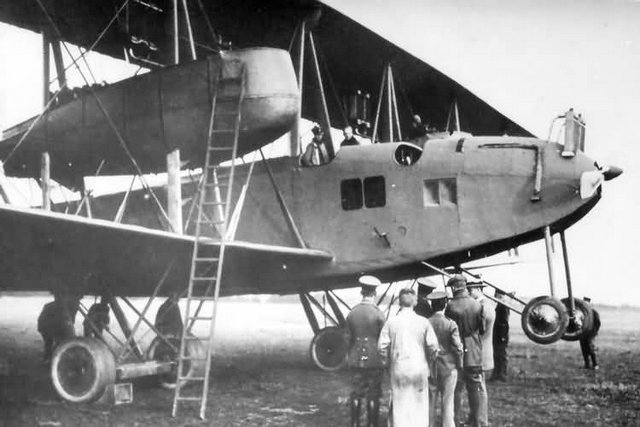 This aircraft (shown above and also on the headline picture) set the seal on what was to come, with a 42.2m (138 ft 5in) wingspan, enormous by the 1915 standards. Other design traits were: podded engines suspended between the mainplanes either side of the fuselage, with accommodation for engineers and/or gunners; an engine installed in the nose; tricycle undercarriage with the aircraft able to stand nose down or tail down onto a tail-skid; a box like tail unit with biplane tailplanes and twin fins with rudders (some later variants also had a central fin). V.G.O. I was followed by the new, improved designs. Engine installations differed with each aircraft type but generally followed the layout of a single nose engine, usually driving a two-bladed propeller and engine nacelles either side suspended by struts between the mainplanes each housing two engines in tandem, geared to drive single pusher propellers.[1] 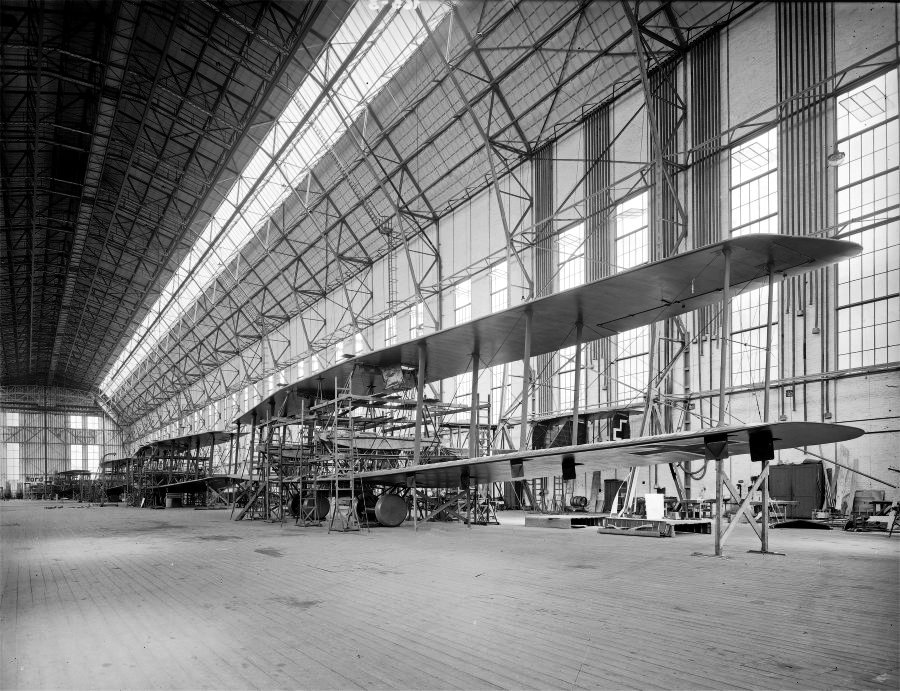 Construction of the aircraft was almost entirely of wood or plywood with fabric covering, steel detail fittings and struts. The wings were three bay strutted and wire-braced assemblies supporting the engine nacelles, at around mid gap and the single axle main undercarriage units. The square-section fuselage, with curved decking forward of the wings, supported the tail unit and nose twin wheel single axle nose undercarriage and housed the majority of the crew, defensive armament positions, cockpit, cabin, and bomb load.

The engine nacelles consisted of semi-monocoque wooden constructions, with the paired engines amidships, a cockpit for the engineer and defensive gun position for the gunner either forward or behind of the engines depending on whether a pusher or tractor arrangement was used. Aircraft using push-pull nacelles, i.e. individual propellers for each engine, had no provision for defensive armament, just a cockpit for the engineer amidships.

The first true production Zeppelin-Staaken R-plane was the R.VI. This giant aircraft carrying up to 2000 kg of bombs was powered either by four 245hp (183KW) Maybach MbIV engines or four 260hp(194KW) Mercedes D.IVa engines. The fuselage was similar to the previous aircraft but the cockpit was extended forwards, enclosed and glazed with a gunners cockpit in the extreme nose. Other improvements included aluminium alloy structure in the triple finned biplane tail unit, which was built with inverse chamber to improve the stabilizing downforce. Eighteen R.VIs were built. All R.VIs except 'R30', the world's first supercharged aircraft, saw service in the Luftstreitkräfte with Rfa500 and Rfa 501 on the western front stationed in the Ghent area. Their air raids began on September 17, 1917. Many air raids attributed to Gotha bombers were, in fact, carried out by Zeppelin-Staaken R.VI or R.XIV bombers, with direct hits on the Royal Hospital Chelsea with the first 1,000kg bomb dropped on England, on 16/17th February 1918. St Pancras Station was attacked the next night. During the campaign from 18 December 1917 to 20 May 1918 the R.VIs of Rfa501 made eleven raids dropping 27,190kg (28tons) of bombs. 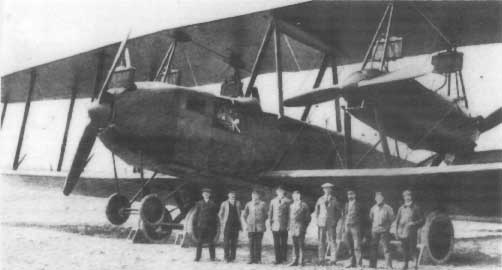 The later versions included R.XIV and R.XV with 5-engine layout (shown above), R.XVI fitted with two 530 hp Benz Bz.VI tractor engines and two 220 hp Benz Bz.IV pushers, Zeppelin-Staaken L and 8301 seaplanes (shown below), the latter briefly used for Berlin - Swinemünde passenger service in the postwar period before it was scrapped under the Allied Control Commission order. 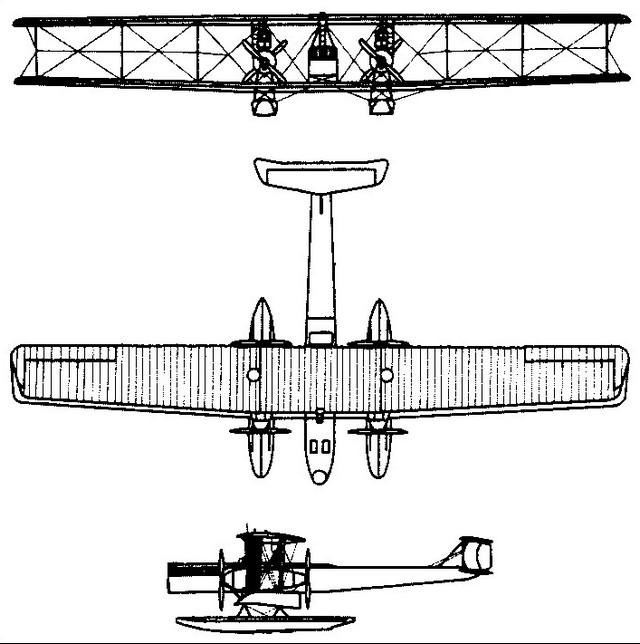 Among thousands German airplanes destroyed after the Armistice there were other R-plane types, some of them very unusual. I promise to feature these giants in a special post. 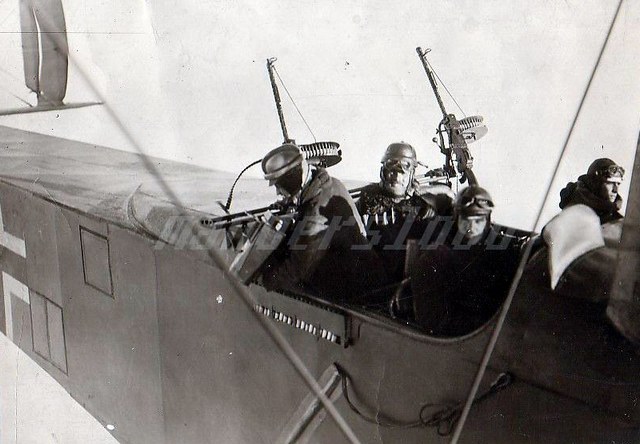