Thanks to our new friend and Captain Spectre creator, Tom Floyd, Dieselpunks is pulling no punches this week.

We're introducing you to the two-fisted, world-spanning tales of Pulp Fiction!

Pulp Fiction is a term used to describe a huge amount of creative writing available to the American public in the early nineteen-hundreds. Termed "pulp magazines" because of the low quality paper used between the covers, these publications proliferated in the nineteen-thirties and nineteen-forties to the point where they blanketed newsstands in just about every popular fiction genre of the time.

Although the pages in-between the covers were a dingy cheap quality, the covers were beautifully decorated, many times with lurid portraits of pretty women in various stages of trouble, and the handsome men attempting to rescue them.

By under-paying writers and publishing on in-expensive media, pulp publishers were able to charge 10 cents for an issue containing several stories. Low prices drew in many working-class young adults and teenagers, who could not otherwise afford some of the more pricier magazines of the day. 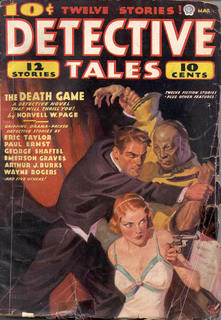 The low price of the pulp magazine, coupled with the skyrocketing literacy rates, all contributed to the success of the medium. Pulps allowed its readers to experience people, places, and action they normally would not have access to.

Bigger-than-life heroes, pretty girls, exotic places, strange and mysterious villains all stalked the pages of the many issues available to the general public on the magazine stands. And without television widely available, much of the free time of the working literate class was spent pouring through the pages of the pulps.

Pulp fiction helped define our modern pop-culture icons, and this week we're showing off the best that pulp has to offer. Starting with Doc Savage and The Spider, we'll be finishing Pulp week with our big Icons of Dieselpunk interview with Tom Floyd, creator of Captain Spectre and the Lightning Legion.

If you're lucky, we'll throw in a few freebies too... Who knows what evil lurks in the hearts of men?

Comment by Tome Wilson on July 26, 2009 at 10:56pm
It was rough absorbing so much info to write/edit this week's articles, but well worth it! I have a copy of The Spider: Robot Titans of Gotham on its way from Amazon as we speak.

Comment by Tom Floyd on July 26, 2009 at 3:51pm
Tome, I am looking forward to this whole week of pulp posts! Thanks for the great choices for the posts, and thanks for supporting the Lightning Legion.