KNOW YOUR PULP - Conan the Barbarian 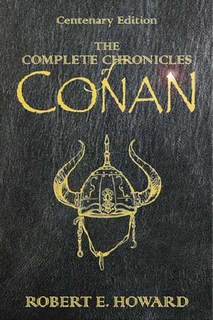 Conan the Barbarian (also known as Conan the Cimmerian, from the name of his homeland, Cimmeria) Has been credited with being the most famous heroic fantasy characters in the sword and sorcery genre and one of the most well known iconic figures in American fantasy Created by American writer Robert E. Howard (1906-1936) in 1932 via a series of fantasy stories sold to Weird Tales magazine, the character has since appeared in books, comics, major motion pictures and a television series.

With Conan and his other heroes, Howard created the genre now known as sword-and-sorcery in the late 1920s and early 1930s. His work spawned a wide swath of imitators, giving him an influence in the fantasy field rivaled only by J.R.R. Tolkien and Tolkien's similarly inspired creation of the modern genre of High Fantasy.

Today marks the 100th anniversary of the birth of Robert E. Howard (1906-1936), the creator of a blue-eyed Cimmerian fighting man, who wandered the ancient Hyborian age as a thief, pirate and mercenary, before finally seizing the royal throne of Aquilonia. In the course of many adventures, this axe and sword-wielding battle-machine was to encounter Stygian demons, a lonely being from another planet, vampiric witches and saturnine sorcerers who possess the elixir of life, a seraglio's worth of scantily clad slave girls, more than one haughty but secretly hot-blooded princess, and, not least, many, many, indeed hordes, of bloodthirsty, blood-crazed Picts, Kushites, Shemites, Vendhyans and Hyrkanians. Even more remarkably, this indomitable warrior earned the love of both Belit, the notorious corsair Queen of the Black Coast, and the deadly Valeria of the Red Brotherhood. Such a hero could obviously be no one but Conan, King Conan, Conan the Barbarian.

To most of us these days, Robert E. Howard's Cimmerian is rather a joke. During the 1970s, the Depression-era hero evolved into a comic-book icon and was later literally embodied by the young Arnold Schwarzenegger in a pair of exceptionally good sword-and-sorcery films. Soon thereafter appeared both the bookish Conan the Librarian and Terry Pratchett's mangled and bitter old bandit Cohen the Barbarian. Many an older reader must still recollect the Frank Frazetta paperback covers, top-action portraits of a massive half-naked fullback with a broadsword, either in full berserker fury or standing triumphantly upon a mound of dead enemies, his mighty thigh caressed by an adoring Playmate of the Month. Or two. Of course, none but the brave deserve the fair.

Are the tales of Conan then what a female friend would call "boys books"? Testosterone-driven daydreams for 15-year-olds? Pulp schlock with titillating suggestions of sadomasochism, rape and sapphism? (Many of the stories were originally illustrated for Weird Tales by the legendary Margaret Brundage, who specialized in kinky cover art.) The answer to all these questions is, obviously, yes.

Yet without making grandiose claims for them, Howard's Conan chronicles are also a bit more than that. They are, as Patrice Louinet demonstrates in his forewords and afterwords to these three volumes, studies in the clash of Barbarism and Civilization. In Howard's grim and all too realistic view, the barbarians are always at the gate, and once a culture allows itself to grow soft, decadent or simply neglectful, it will be swept away by the primitive and ruthless. As a character insists in "Beyond the Black River," the most deeply felt and complex Conan story, "Barbarism is the natural state of mankind... Civilization is unnatural. It is a whim of circumstance. And barbarism must always ultimately triumph."

To Howard, however, this isn't wholly a bad thing. As King Conan plaintively confesses to his friend Prospero, "These matters of statecraft weary me as all the fighting I have done never did... In the old free days all I wanted was a sharp sword and a straight path to my enemies. Now no paths are straight and my sword is useless." In essence, Conan is a creature of the wild - he is frequently likened to a wolf or tiger - and his understanding of the world is simple, instinctual, unmediated. While others hesitate or plan and speculate or find themselves trapped by their social positions or tangled in the snares of bureaucracy, Conan acts. Fear, doubt, uncertainty - these never trouble his nobly savage breast. He does what needs to be done, by Crom, no matter how daunting the task. And afterwards he quaffs his wine and moves on.

Conan's greatest affinity is obviously with the Western gunfighter of our imaginations, the quiet drifter like Shane or Cheyenne who one day rides into town and then, after a final gun-blazing showdown, rides off into the sunset. Before his suicide at the age of 30, Howard attempted every sort of adventure story - horror ("Pigeons from Hell" is ludicrously titled but chilling), detective and occult fiction, sports narratives and Westerns. "Beyond the Black River" reads like a tale of settlers and rampaging Indians transposed to the borders of bronze-age Aquilonia. After all, when a plot failed to sell to one market, a serious pulp writer simply reworked it for another.

Unfortunately, this cavalier attitude was carried on by Howard's executors. When Conan was rediscovered in the '60s and '70s, writers were hired to mine his drafts for new stories. His published exploits were filled out and the chaotic Hyborian Age turned into a realm as carefully designed as Narnia or Middle Earth. Howard's energetic (if sometimes corny) writing was heavily edited and smoothed out. Eventually, though, these additions and pastiches came under attack as collectors and scholars like Glenn Lord and Karl Edward Wagner began to republish the original texts. That process has now been crowned by these authoritative editions of all the Conan stories, supplemented with their author's outlines and synopses, maps, letters and essays, as well as appendices on the location of surviving typescripts and much interpretative material by editor Louinet and series editor Rusty Burke. (There are additional compilations devoted to Howard's Puritan sword-slinger Solomon Kane and the Celtic warrior Bran Mak Morn but not yet of the Conan precursor, Kull.) These three volumes are individually illustrated, but each artist aims to be faithful, in his fashion, to Howard's descriptions of the formidable Cimmerian.

I've read most of the Conan stories, as well as the novel (included here) The Hour of the Dragon, and, approached as guilty pleasures, they can be wonderfully entertaining. For that matter, apart from Fritz Leiber's tales of Fafhrd and the Gray Mouser, sword and sorcery adventures don't come any better. Still, one must make allowances. Howard's writing can be cliché-ridden ("The Cimmerian froze in his tracks. It was no image - it was a living thing, and he was trapped in its chamber!"). And there's undisguised racism: The darker an enemy's skin, the more vicious and animalistic his nature. Perhaps most disturbingly, Conan glorifies the Gordian Knot solution: The proper response to a complex problem is to grab a sword and brutally hack away until the problem stops moving. Some naive readers might imagine that such a policy actually works in the real world.

In general, Howard's plots involve a quest of some kind - for treasure, for revenge - and culminate in a fight with a witch or wizard, who is usually aided by hypnotic powers, magic talismans and demonic pets. Hidden tunnels and crumbling temples abound. Evil magic is always in the air:

"Ships did not put unasked into this port, where dusky sorcerers wove awful spells in the murk of sacrificial smoke mounting eternally from blood-stained altars where naked women screamed, and where Set, the Old Serpent, archdemon of the Hyborians but god of the Stygians, was said to writhe his shining coils among his worshippers."

In the cruder stories a lissome young woman is nearly always threatened, often drugged by the sickly sweet Black Lotus and led zombie-like, but eye-catchingly unclothed, to some fate worse than death. In "Black Colossus" an undead wizard sends his shadowy familiar into the chamber of a virgin princess, where the repulsive creature unctuously hisses its master's obscene prophecies: "But thou shalt be my queen, oh princess! I will teach thee the ancient forgotten ways of pleasure."

No matter how hopeless the outlook, Conan himself never gives up, never tires, somehow always survives. In "A Witch Shall Be Born" the warrior is actually crucified and as he hangs on a cross the vultures circle round him, one in particular:

"Conan drew his head back as far as he could, waiting, watching with the terrible patience of the wilderness and its children. The vulture swept in with a swift roar of wings. Its beak flashed down, ripping the skin on Conan's chin as he jerked aside his head, then before the bird could flash away, Conan's head lunged forward on his mighty neck muscles and his teeth, snapping like those of a wolf, locked on the bare, wattled neck... Grimly he hung on, the muscles starting out in lumps on his jaws. And the scavenger's neck bones crunched between those powerful teeth. With a spasmodic flutter the bird hung limp. Conan let go, spat blood from his mouth."

To my mind, the longer works reveal Howard at his best. In "The Hour of the Dragon" Aquilonia is conquered by magic, but in battling to regain his lost throne Conan learns better to understand and appreciate his adopted country, as well as his duties as its ruler. In "Red Nails," the last Conan story he wrote before his death, Howard presents an in-bred civilization that has degenerated into a never-ending, generations-long guerrilla war between rival factions inside a single gigantic castle. Its Grand Guignol conclusion dramatizes the Freudian phrase "the return of the repressed" and leaves but one man standing. As with so many of the Conan stories, the overall mood is one of sorrowful wonder at the insane ways of men.

Conan is still a young wanderer in "Red Nails," only dreaming that one day he might become a king. Yet since Howard never bothered to publish the Conan stories in any particular order, readers already know from his very first appearance in "The Phoenix on the Sword" that the Cimmerian will realize his ambition. Indeed, from the beginning he strides out of the pages of the so-called Nemedian Chronicles, already the stuff of modern myth:

"But the proudest kingdom of the world was Aquilonia, reigning supreme in the dreaming west. Hither came Conan, the Cimmerian, black-haired, sullen-eyed, sword in hand, a thief, a reaver, a slayer, with gigantic melancholies and gigantic mirth, to tread the jeweled thrones of the Earth under his sandalled feet."

Click on the links below to read Robert E. Howard's best Conan stories for free

Haven't read Conan in years! What a great Site. Disturbing that Howard's last saga "presents an in-bred civilization degenerated into generations-long guerrilla wars." Sounds a little too close to home in this fear-based world. Hail our escape to dieselpunk!