Flash Gordon, introduced as a Sunday newspaper comic strip by King Features Syndicate in 1934, remains after more than 70 years, one of the best-known and most beloved epics of heroic fantasy produced in America.

Initially envisioned and drawn by the brilliant Alex Raymond (1909 - 1956), the strip's mélange of alien wonders, beautiful damsels, interplanetary evil and peerless derring-do remains potent today, as witness its many adaptations in print, motion pictures and television. It has been cited by no less a popular fantasist than George Lucas as a primary influence on his Star Wars series.

Beyond the lasting impact of the strip's heroic themes, the drawing skills of Raymond inspired a small army of succeeding cartoonists to take up his illustration-based stylistic mantle. Al Williamson is arguably the foremost of these acolytes, widely acclaimed as the artist who best exemplifies the original spirit of Raymond's creation, as well as being the most distinctive and lyric. His vision of the character, formed in childhood and deeply personal, captured the hearts of Flash Gordon readers like no other. 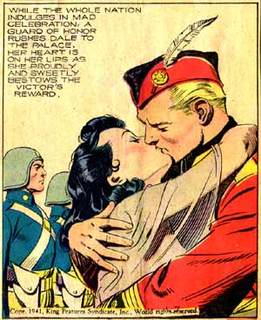 Alexander Gillespie (Alex) Raymond was born in New Rochelle, New York, as the son of an engineer. Although he showed an early interest in drawing, he had his first job as an order clerk in Wall Street. When the economic crisis hit the USA in 1929, he enrolled in the Grand Central School of Art in New York City. A year later he started working with Russ Westover, the creator of 'Tilly the Toiler' and was introduced to King Features Syndicate.

Shortly afterwards, he transfered to Lyman Young ('Tim Tyler's Luck'), from 1930 to 1933. In 1932 and 1933, he ghosted both Young's daily strips and Sunday pages of 'Tim Tyler'. In this same period, he additionally assisted Chic Young on 'Blondie'. At the end of 1933, Raymond was asked by King Features Syndicate to create a Sunday page that could compete with 'Buck Rogers'. Together with writer Don Moore, Raymond came up with the science-fiction comic 'Flash Gordon' and its complentary strip, 'Jungle Jim', an adventurous saga set in South-East Asia. In addition, Alex Raymond signed on to draw 'Secret Agent X9', a daily strip scripted by Dashiell Hammett for the Evening Journal. All three creations started in January, 1934.

While working on his comic series, Raymond additionally produced illustrations for Blue Book, Look, Collier's and Cosmopolitan. By the end of 1935, Alex Raymond stopped with 'Secret Agent X9', leaving it to Charles Flanders, to spend more time on his Sunday features. In particular, 'Flash Gordon' became world famous. In 1944, Raymond joined the U.S. Marine Corps and served in the Pacific, while his comics were continued by his assistant Austin Briggs.

Demobilized as a major in 1946, Raymond created 'Rip Kirby', a daily police strip, which also enjoyed enormous success. Alex Raymond died at the height of his fame, on 6 September 1956, after a car accident that also injured Stan Drake. Alex Raymond's influence on other cartoonists was considerable during his lifetime, and has not diminished after his death. The 'Flash Gordon' newspaper strip was continued by artist Jim Keefe.