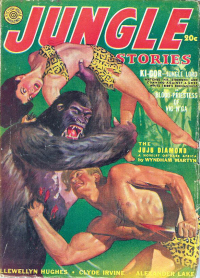 During the heyday of the pulps, imitation was common. Create a character who is commercially successful and there would soon be seemingly dozens of similar characters popping up at the newsstands right next to your guy.

Tarzan of the Apes was, of course, one of the most successful characters to appear in the pulps. So he soon had his imitators: Tam, Son of the Tiger; Morgo the Mighty; Jan of the Jungle; Kioga, the Snow Hawk; Kwa of the Jungle; Jongor; Ozar the Aztec; and many others.

The stories in which these Tarzan clones appeared vary wildly in quality, but some of them are really quite good. The best of the lot was probably Ki-Gor, the Jungle Lord. Ki-Gor was an infant when his missionary father is killed, forcing the young lad to grow up in the jungle and learn to take care of himself. As an adult, he rescues the beautiful socialite Helene from several dangers after her plane crashes in the jungle. The two, of course, fall in love and Helene leaves high-society behind for a life in Africa. 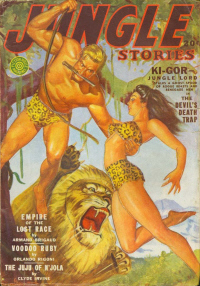 There were 59 Ki-Gor stories appearing in Jungle Stories magazine between 1939 and 1954. There are several factors that make them stand out from the crowd. Ki-Gor is given a strong personality - a little less stoic than Tarzan, but still brave and resourceful. Helene is just as capable and takes an active role in most of the stories (compared to poor Jane, who rarely gets to have any fun after the first few Tarzan novels.)

And, though there are elements of the sort of racial stereotyping common in the fiction of the day, several regular supporting characters - both African natives - are presented as brave and intelligent men, equals to Ki-Gor in just about every way. Tembu George, leader of the warrior Masai tribe, and N’Geeso, chief of a pygmy tribe, are Ki-Gor’s best friends, accompanying him on his adventures and fighting at his side. They are both fun characters, with both regularly getting their own Crowning Moments of Awesomeness throughout the series.

A recent issue of High Adventure magazine reprinted two very entertaining Ki-Gor stories from 1948. One of them involves a old man who controls a pack of large and vicious dogs, using them to terrorize a local tribe as a part of an insane scheme to take revenge on an old enemy. With him are his two beautiful daughters, one evil and the other merely almost evil. After several fights, captures and escapes, Ki-Gor and Tembu George lead the Masai against the old man’s forces. There’s a wicked twist at the end involving the not-quite-evil daughter.

The other tale involves yet another not-quite-evil jungle girl, this one raised by gorillas and now determined to use a primate army to take revenge on men after having been briefly captured by slavers. This one contains several exciting and well-described action scenes, including a one-on-one fight between Ki-Gor and a large gorilla.

The best "Jungle Lord" stories are still the original Tarzan novels, but Ki-Gor does all right for himself, using the Tarzan template, but infusing his adventures with his own individual style and personality.