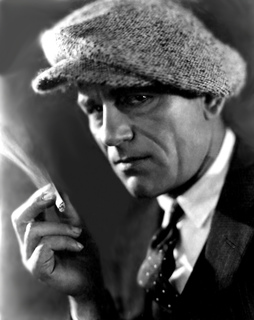 Lon Chaney was born on April 1, 1883 in Colorado Springs, Colorado. He was the son of deaf mute parents, Frank and Emma Chaney and he learned from childhood to communicate through pantomime, sign language and facial expression. His mother became bed ridden from rheumatism when Lon was very young, so he quit school about the age of ten to care for her and his younger siblings.

To keep the family entertained, Lon would venture into town and observe people. He would also go to his father's place of employment for 25 years, "Phil Strubels Barber Shop" where Frank Chaney (also known as Dummy Chaney or the Millionaires barber) would shave and cut hair for the town's patrons.

When at home, Lon would reenact skits via sign language and pantomime silently mimicking the towns citizens and events for his family. Unknowingly, he was starting a career in entertaining people which would span nearly four decades and eventually lead him to be the worlds most popular box office attraction.

As a young man, he worked as a guide taking tourists to Pikes Peak where he developed his love for the outdoor life. He also learned the wallpaper, drapery, and carpet trades. Lon was eventually hired by his older brother John, as a property boy, scene painter, and stagehand at Colorado Springs Opera House. He witnessed many of the great actors of the time, passing thru on tour, and developing his own passion for the theater. At 19, he went on the road as an actor in a play that he also co-wrote with his brother titled "The Little Tycoon". After limited success, the company was sold and Lon continued on with the new owner.

In 1905 while on tour in Oklahoma City, Lon met Cleva Creighton, a sixteen year old beauty who was auditioning for a part in the show. Against her mother's wishes, Cleva was picked up by the touring company because of her beautiful singing voice. The following year, due to an unexpected pregnancy, they returned to Oklahoma to prepare for the birth of their child.

With a baby on the way, the couple temporarily quit show business. Lon was forced to return to the furniture and carpet laying business in order to support his family, but his deep love of the theater soon found him returning to the stage in vaudeville shows around Oklahoma City.

The Chaney's eventually arrived in California by 1910. They found more consistent employment with Lon as a stage manager, actor, and choreographer working with Kolb and Dill, and other various stage shows in San Francisco, Oakland and Los Angeles. Cleva was becoming a popular head liner singing in Cabaret shows. Their marriage and relationship had become very strained however, due to working conditions, jealousies and inability to communicate.

In April of 1913 after continued disputes, Cleva entered the Majestic Theater where Lon was stage manager for Kolb and Dill and in a suicidal attempt, swallowed a vial of poison. The poison damaged her vocal chords putting an end to both her career and marriage to Lon. This public scandal also damaged Lon's stage career. A petition for divorce was filed in April of 1914 and finalized a year later. Creighton was placed temporarily in a home for children of Divorce and Disaster.

Lon was forced to seek new employment and turned to the booming industry of silent films, securing a job with Universal Film Manufacturing Company where he received his first screen credit in a one reel short film titled Poor Jakes Demise. This move began one of the most legendary acting careers in film history. Between 1913 and 1930 he played more than 150 widely diverse roles, frequently villainous and sometimes bizarre and macabre, almost always pathetic and moving. His early film career was mostly undistinguished. He also directed six films, writing the screenplay for two of them.

Lon remarried in November of 1915, to Hazel Hastings, an acquaintance from his Kolb and Dill days. Creighton returned home to live with his father and new stepmother.

By 1918 with over a hundred film credits for Universal, he asked for a raise and was refused. Shortly thereafter, he left the studio to become a freelance actor. Times were tough once again and Lon wasn't sure he had made the right decision.

William S. Hart, a popular Western movie star of the time, contacted Lon requesting him to play a villain opposite Hart in "Riddle Gawne". Lon received high praise for his performance in this role and considered it as his first big break. In 1919, there came critical acclaim for his role in George Loane Tuckers "The Miracle Man" portraying "The Frog", a con man who pretends to be a cripple whom is miraculously healed.

Lon often suffered in order to achieve a realistic approach for the character he was portraying. For "The Penalty" in 1920, he had his legs bound tightly behind him in a harness, inserting his knees into leather stumps devised as artificial legs with his feet bound at the thighs. This was a very painful ordeal which would cut circulation to his legs resulting in broken blood vessels.

For "The Hunchback Notre Dame" he wore a hump and harness reportedly weighing in excess of 50 pounds, twisting his torso to feel the pain of Quasimodo and delivering a performance that earned him worldwide fame.

His portrayal as "Erik" the tortured opera ghost in "The Phantom of the Opera" 1925, and the make up he created for this role secured him forever into film immortality.

In 1924, he starred in Metro-Goldwyn's "He who gets Slapped" a circus melodrama portraying a clown, once an accomplished scientist, who fled to the circus because a rich nobleman has stolen his wife and scientific experiments. This film opened to critical success, leading to a series of contracts with MGM Studios over the next 5 years.

Among other memorable performances on the silent screen, were his portrayals as a Chinese Mandarin in "Mr. Wu" (1927) a tough drill sergeant in "Tell it to the Marines"(1926), one of his personal favorites, an armless knife thrower with Joan Crawford in "The Unknown" (1927), Russian peasant in "Mockery" (1927), a gangster in "The Big City" (1928), Tito the clown in "Laugh Clown Laugh" (1928) with Loretta Young, a police detective in "While the City Sleeps" (1928), a train conductor in "Thunder" (1929) and dual roles as a Scotland Yard Inspector and vampire in "London after Midnight" (1927).

Due to his ability to portray an endless variety of characters throughout his career, he became known as "The Man of a Thousand Faces".

Lon Chaney, like Charlie Chaplin, shunned the transition to talking films and was one of the last of the silent screen stars to holdout against speaking roles. His stock and trade as he professed "was in makeup and the art of pantomime". It was also speculated his voice did not register well in the new talkies.

His last role in 1930 was his one and only talking film, a remake of 1925 "The Unholy Three". He played Echo a crook ventriloquist and used five different voices in the movie, thus proving he could make the transition from silent films to the talkies, but less than two month's after the film's release on August 26, 1930, he died from a throat hemorrhage.

MGM studio was ordered to stop production and observe a period of silence while his remains were lowered to their final resting place honoring one of film's most unique and greatest actors. The motion picture industry along with family, friends, and numerous fans across the world mourned his passing.

Yet nearly seventy years after his death, his legacy still grows. He was a one of a kind actor that left a mark on an industry that will never be replaced. The characters and make ups he created on screen have continued to inspire new generations of artists and fans. And as long as there is a medium to view film, his artistry will live on.