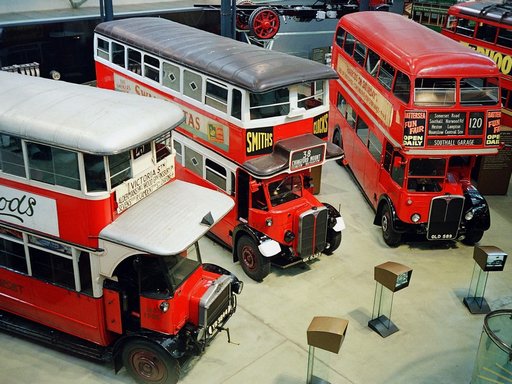 London Transport Museum in Covent Garden is a proud owner of great vehicles and also possesses a vast image archive, available online.
Let us see some pictures from the interwar era: Inside an E-class serial-production tram Re your picture of BPJ 224:  this is an AEC 'Q' type motorbus of 1934.  It was built thus and was not a trolleybus  conversion.  The engine was on the right side, within the wheelbase.  You can see the cooling vents very clearly in the image.  The entrance was at the front, hence the short rear overhang (overall length was very restricted in thise days).

This example was Q5 in the London Transport fleet, and remained in service throughout the second world war before sale in 1950 and conversion to a caravan.

A full history of the London Transport examples of the AEC 'Q' can be found at Ian's Bus Stop (http://www.countrybus.org/Q/Q.html). Some examples were also built for provinicial fleets.