You know that postwar cars are not this garage's specialty. But this two-door Austin is here as a close cousin of prewar streamliners. Nothing revolutionary in its layout, although: no front drive or rear engine. Everything's conventional - save the appearance, quite revolutionary for a 1940s British automobile.

Would you believe that the 1950 Austin A90 Atlantic Convertible was conceived as part of an economic program?

One of the results of this policy was the new Austin A90 Atlantic, a convertible designed with the American market in mind. Riding a 96-inch wheelbase, it arrived in 1949 and rode into 1950 unchanged, save for a lower $2,634 price tag. The A90 Atlantic was the first Austin to forsake the traditional upright grille, replacing it with a more rounded front end with a low-mounted grille sporting a central spotlight. To Americans, the Atlantic was too small and too expensive: 32.4 inches shorter and $158 costlier than a 1950 Buick Super ragtop. Thus, it sold poorly, and production was halted in September 1952. No matter, the Atlantic has earned its place in Austin history. Peter Jewson, of Oxfordshire, England, was so impressed that he now owns two! This car is so Dieselpunk you have to love it. The center headlight is reminiscent of the 1948 Tucker Safety Car. 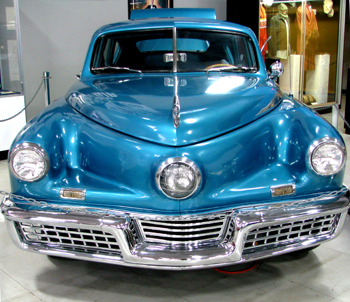 The center headlight was articulated with the steering so anywhere you steered. the headlight would follow. Forest Tucker did not take into effect that drivers were constantly moving the wheel to make minor corrections to their path. The effect at night, as viewed by pedestrians, was a drunken motorcycle being closely pursued by an automobile.

We had an entry dedicated to this car, too.