A beautiful example of pre-war streamline: Meet the Jawa 700 Coupe - a little red wonder from Prague. It was built by Jawa Motors using a standard Model 700 platform and a custom body designed along Jaray principles. Well, Paul Jaray and his legacy are featured in a special article. Today, just a few words about Jawa.

The name has nothing in common with coffee or Indonesia. It is composed of Ja (for Janeček - the factory's founder) and Wa (for Wanderer; in the late 20s, Mr. Janeček started to built motorcycles fitted with a 500cc Wanderer engine). In 1930s, there was also a less powerful Model 175, famous for its fuel efficiency and low maintenance costs: In 1933, a small car was added to Jawa line-up: the Model 700, a license-built DKW F2/Meisterklasse 701. This humble economy-class four-seater was arguably the most advanced passenger car of the period, with front wheel drive and transverse-mounted 694cc engine. In 1937, the Jawa 700 was replaced by a more modern Minor but several competition and custom cars were built in 1938-1939. There are pictures of an enclosed 700 Coupe bearing more than a passing resemblance to the Adler Trumpf Rennlimousine and DKW/Horch streamliners designed by Koenig von Fachsenfeld: And also a streetwise variant: Sure! I'm not a cat but took a ride or two. Not a stretch limousine, of course, just enough for my not-so-dwarflike self.

Awww...issn'titcute!  Can a human being actually fit in that sidecar?  I'd expect to see this ridden by cats.  Love the streamline design, though!

Well, in my mind there's a quite different image of Jawa: 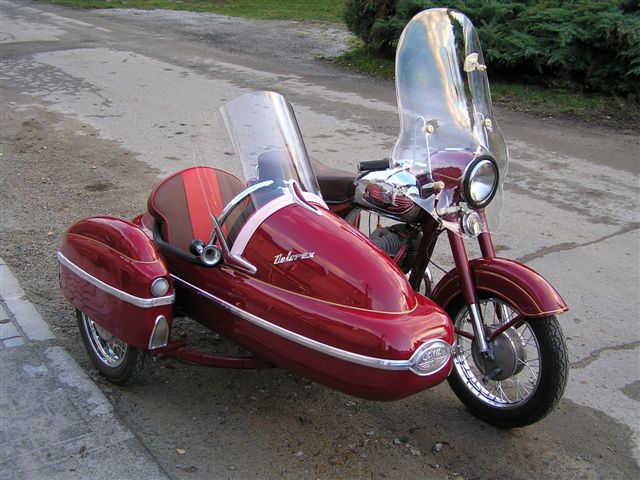 I'd expect somwething FAR larger, far boxier, and more track-driven from a company called "Jawa" myself!