Actually, the work on Type B, an improved version of the glorious Auto Union Type A, started in the autumn 1934. The car received a new 16-cylinder 4,951 cc engine with an increased power output (395hp at 4,800rpm). Additional fuel tank was omitted, the capacity of the main and only tank was increased up to 210 litres. The car was 20kg lighter than its predecessor, had a longer wheelbase but was shorter and lower. There was also a new cooling system. The initial idea of using the body frame tubes for fluid circulation proved counter-productive, so the designers turned to a more conventional mix of nickel-bronze an flexible rubber pipes. The Type B officially debuted on May 5, 1936 in Tunis. Achille Varzi who only recently signed a contract with Auto Union, won the Grand Prix beating Pierre Vimille (Bugatti) and Philippe Étancelin (Maserati). But only a week after, in Tripoli, Varzi lost the Grand Prix race to Caracciola (Mercedes-Benz). During the same race, the Type B of Hans Stuck went in flames. He was lucky enough to get out of the car uninjured. 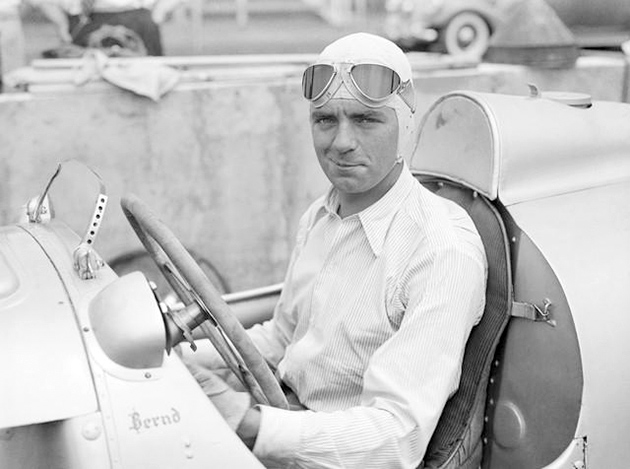 Nevertheless, the Auto Union management didn't give up. They looked for a reinforcements - and finally signed a pilot from DKW race team, called Bernd Rosemeyer (above). His debut at AVUS (May 26, 1935) wasn't a success, nor for him personally neither for the team: Fagioli (Mercedes-Benz) won, Varzi was only the third and Stuck - the fourth in the final competition; Rosemeyer had to leave the track when one of the tires suddenly went loose. But on July 4, at Nurnburgring, Rosemeyed finished just 1.9 seconds after the great Caracciola. Two other important races (French GP at Montlhéry, German GP at Nurnburgring) were less lucky for Auto Union. The joint effort finally paid off at Pescara where Varzi won the Coppa Acerbo, Rosemeyer finished the second, instantly becoming everybody's darling (the Italians even called him "another Nuvolari"!), Stuck was only the 11th. Look at the headline picture: #37 is a mount of Hans Stuck, #30 - of Bernd Rosemeyer, #39 - of Achille Varzi.

Later in the year, Hans Stuck won Italian Grand-Prix at Monza and Rosemeyer was the fastest in Brno, taking the Masaryk Grand Prix. There, in Czechoslovakia, he met his future wife Elly Beinhorn, a famous aviatrix. "He drove with a huge laurel wreath around his neck, - she recalled, - and his greyish-blue eyes looked at me, laughingly. Oh God he was so happy!"

Now let's leave the racers at the racetrack and take look at one of the most ambitious Porsche designs based on Auto Union racecars: the P52. This is how Professor Ferdinand Porsche's roadgoing V16 Auto Union supercar would probably have looked. All that remains of the plans for this 'lost supercar' is a handful of drawings in the Porsche Archive. Dated November 14,1933, the very first shows a low, sleek and streamlined shape that can fairly be described as the granddaddy of the Porsche 911. It is not difficult to trace the ancestry, for the drawings are numbered K3317 and K3318, which almost certainly means they were made by Dr Erwin Komenda. He was responsible for the bodywork that was to appear on the Auto union GP cars and, after the war, he styled the very first Porsche sports car, the 356. Also involved with the latter was Professor Porsche's son, Ferry who later styled the Porsche 911 and acknowledged Komenda's influence.

Looking at Komenda's sleek, flowing lines, one can only bemoan the fact that they were never transformed into metal, as the result would have stunned the motoring world. The limousine was unlike any that had gone before. In the mid '30s, such cars were built on the perpendicular, so that gentlemen in top hats and ladies in extravagant bonnets might be accommodated without removing them. 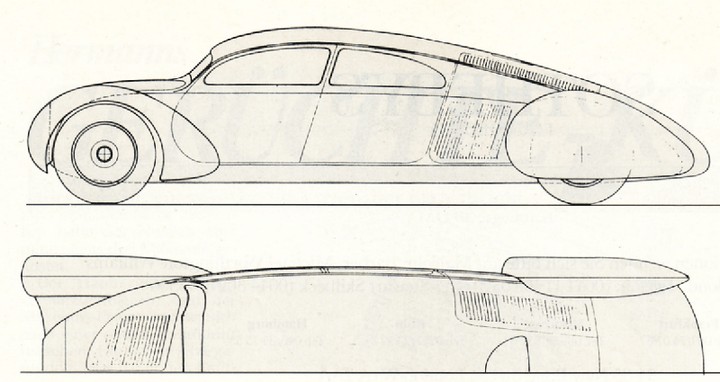 Komenda, however, had no such concerns and styled his karroserie to slice through the air with minimum resistance and maximum speed, It is also clear that he planned to transform the Grand Prix car into a passenger vehicle with the minimum of modification and so, in a daring move, he retained the former's central driving position and placed a scat either side, but slightly to the rear of the driver's. In the limousine, however, all three are in line abreast, to allow proper legroom for the two passengers in the back. There is provision for a spare wheel to be carried in the car's sloping rear end.

By early 1934, the road car project had been given its own identity and was designated Typ 52. Komenda's chassis drawings show he had added a longitudinal framework to which the body and large twin exhausts could be fixed. Hubs have also been drawn either side of the V16 to carry spare wheels, presumably in order to afford some luggage space in the rear of the body. The tyres on the road car were to be 5.50x20 all round, rather than the differently sized rubber of the racer.

Although the engine capacity of the Typ 52 was to remain at 4.4 litres (supercharged) the power was to he reduced from the racer's 295bhp at 450Orpm to a more manageable 200bhp at 3650 rpm. This, the Porsche design team believed, would give the sports car a maximum speed of 125mph in fifth gear and a 0 60mph time of around 8.5 secs, a quite sensational performance for 1934. 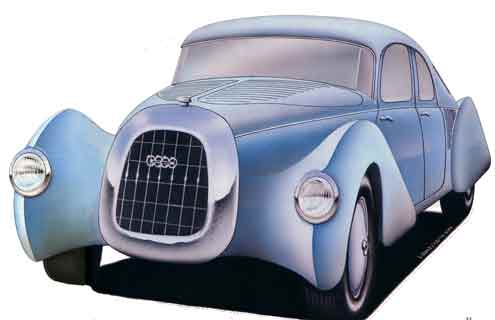 The limousine would not have been much slower; to put things in perspective it's worth looking at the performance of what would have been the Typ 52 five seater's main rival in the mid '30s the Mercedes Benz 540K. This behemoth weighed in at a colossal 5,712lbs, whereas the planned weight of the sports Auto Union was only 3,858lbs. Even the limousine would still have been a lightweight compared with the Mercedes. To propel its massive 540K's 5.4 1itre, straight eight engine managed a paltry 115bhp and an unremarkable 180bhp when the supercharger was engaged.