This futuristic concept, drawn by Jo Gault in 1946, could be a Buick: Real postwar Buicks, no less impressive with their beautiful curves, massive fenders and extensive chrome trim, were developed from 1942 models: The 1942 model year began in September 1941. Despite the hardships imposed by lack of materials and uncertain production schedules, Buick made substantial changes in its 1942 models, and the near total redesign caught virtually all other auto makers by surprise. The new Buick was an extremely modern car, with its massive chrome grill and large bumpers. After 1 January 1942, the government prohibited the use of all chrome trim, and thus all trim pieces were painted in matching colors, primarily battleship gray. Known as 'blackout models,' production of these chrome-less cars stopped on 2 February 1942 when the government ended all auto production for the duration of the war. However, Buick did not have to resort to painted bumpers because it had enough pre-restriction chromed bumpers on hand to complete its 1942 model run. The last Buick to leave the factory carried a sign reading: 'Until total victory we dedicate ourselves to the objective 'When better war goods are built, Buick workmen will build them.''

After the war, the passenger car production resumed. For 1946 model year, Buick introduced slightly revised versions of their Special, Super, and Roadmaster. A middle-aged man in a suit standing next to his Buick. It's a 1946 or 47 model, possibly a Roadmaster. The car is sitting in the drive of a upper-middle class suburban home (by Raymondx1, on Flickr) 1948 was the (model) year of the famous Dynaflow transmission - initially available only in the Roadmaster. in 1949, the Riviera name first entered the Buick line  as the designation for the new two-door pillarless hardtop, which was described in advertising as "stunningly smart." And this 1949 Buick Roadmaster Convertible from the 1988 film Rain Man featuring Tom Cruise and Dustin Hoffman was recently seen at an auction here. 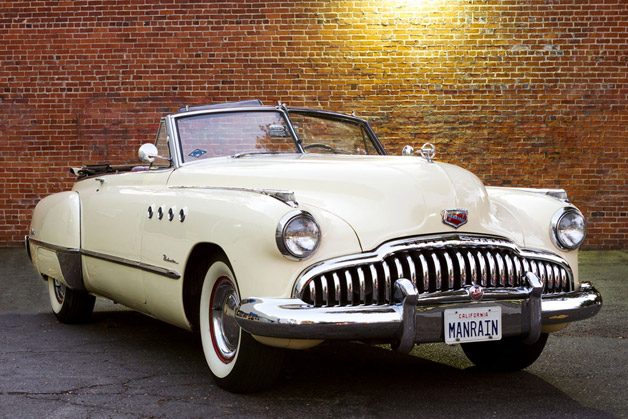 The straight-eight powered convertible is one of two used in filming and features an upgraded rear suspension to cope with the weight of a cameraman and camera equipment.

See you next Friday!

Y-job, that's right. I got the name wrong, but I agree with Larry. It should have been called "The Black Raven Eight," or something like that. The prosaic name was probably stuck on this beauty because it was never meant for mass-production. However, its lineage in the Buick line and on GM products from the other divisions is unmistakable.

The Y-Job is a beautiful car but name sounds just plain wrong. ;)

Y-Car, you say? Y-job! And we've got a special article featuring this one and only car!

You should have included a photo of the Buick Y-Car, since these designs were all derived from it. Gorgeous automobiles, but I wish they'd kept the hide-away headlights!

Pure works of art. Love them.

Aaaaa for the days when Gas was CHEAP!!!  LOL