In the mass culture, the image of a 'Dieselpunk tricar' is based on the Morgan Aero - fast, sporty, elegant. But what about a trike truck? Here's the story of a once famous make, told by Paul Markham on his much-recommended Project Tempo blog.

The company Vidal and Son was founded in Hamburg in 1883 to provide harbour-side fire fighting services for the coal importing industry. In 1927, with the German economy crushed under the weight of Versailles reparations, the German coal importing industry fell into recession and Vidal and Son faced an uncertain future. Looking for a new opportunity, Max Vidal and his son, Oskar, decided to move into the auto industry. They saw an opportunity to develop a simple commercial vehicle, similar to Goliath's popular 1920 Blitzkarren. The result was the Tempo T1, a tricycle delivery cart powered by a single cylinder 198cc two-stoke motor.  They also produced a larger version, the Tempo T2, with a 400cc motor.

The T1 and T2 were cheap, poorly built copies of contemporary delivery tricycles built by a plethora of other companies, such as Goliath, Phaenomen and Rollfix. However, they were so poorly constructed that their constant break downs required Tempo to employ a full-time mobile mechanic just to keep them on the road. 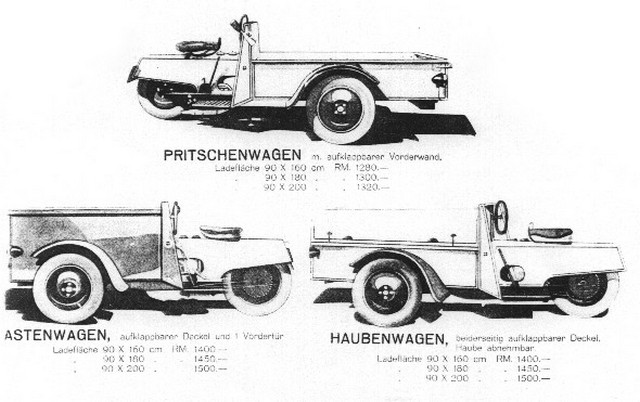 Such an inauspicious start could have been fatal to a new auto company, but after a tenuous start Tempo received a lifeline when their major competitor, Rollfix went bankrupt in the 1929 Stock Market Collapse. Rollfix's chief designer Otto Daus, jumped ship to Tempo and immediately applied his technical expertise to addressing the problems of the Tempo T' 1 and 2.  The result was the Tempo T6 (shown above), which although superficially similar to its predecessors, was in fact a completely redesigned vehicle.  Powered by a reliable JLO 198cc two stroke engine, the T6 sold so well - over 3500 units - that Tempo relocated to larger premises in Hamburg.

Tempo also produced a 350cc engine version, the T10, but as this sized engine required users to have a drivers license and pay road tax, it did not sell well.  Less than a 1000 were built. 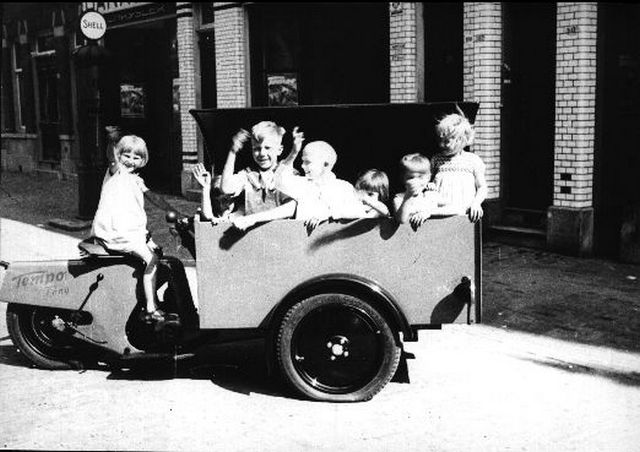 Tempo tricycles were steered by a steering wheel, which turned the front wheel via chain and series of articulated levers. In an attempt to simplify things, in 1932 Tempo replaced the steering wheel with a tilting lever, which steered the vehicle by adjusted the incline of the front wheels, in much the same way as modern three wheeled scooters do today. This allowed Tempo to slash the price of the new Pony (shown above) to only 675RM. Although the Pony was the cheapest vehicle on the road, customers did not like the strange steering mechanism and barely 500 were sold. In 1933, Tempo's main competitor, Goliath, released their new commercial tricycle, the Goliath F400.  Based on their successful Goliath Pioneer design, the F400 had a fully enclosed cab and optional body styles, and was a quantum improvement over contemporary delivery tricycles. 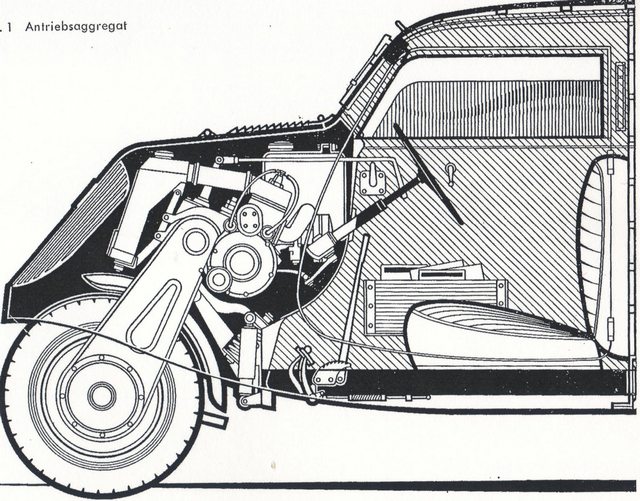 Tempo responded immediately with their own imitation, the Tempo Front 6.  While the Goliath was powered by and under-seat engine driving the rear wheels by conventional drive shaft, the Tempo Front retained a simple train drive mechanism, now driving the front wheel. Front wheel drive necessitated mounting the engine atop the front axle so it could pivot with the front wheel as it turned. To accommodate this arrangement Tempo developed their distinctive chain case. 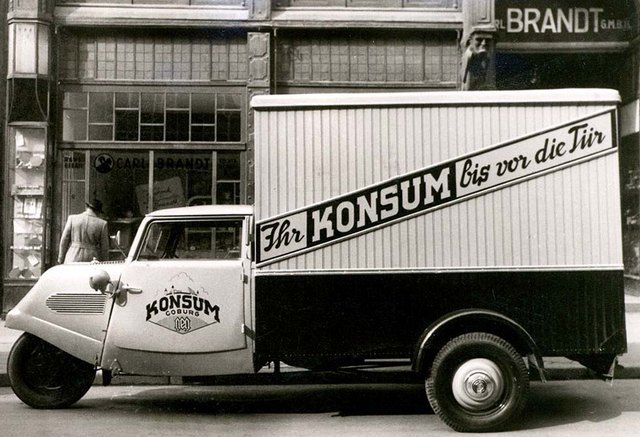 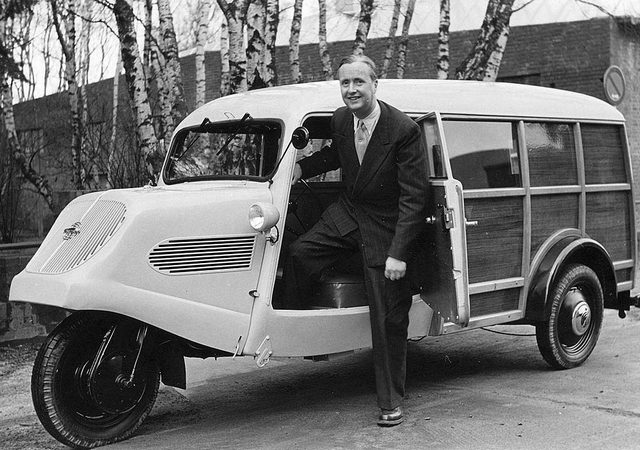 The cab was wood framed with plywood panels covered in imitation leather. The new Front models were designated the D 200 with the JLO 200cc engine and the D 400 with the 400cc engine. The Tempo factory provided a wide variety of customised body styles, from simple flatbed tray, to high sided delivery van, to refrigerated van, and even a passenger sedan version. 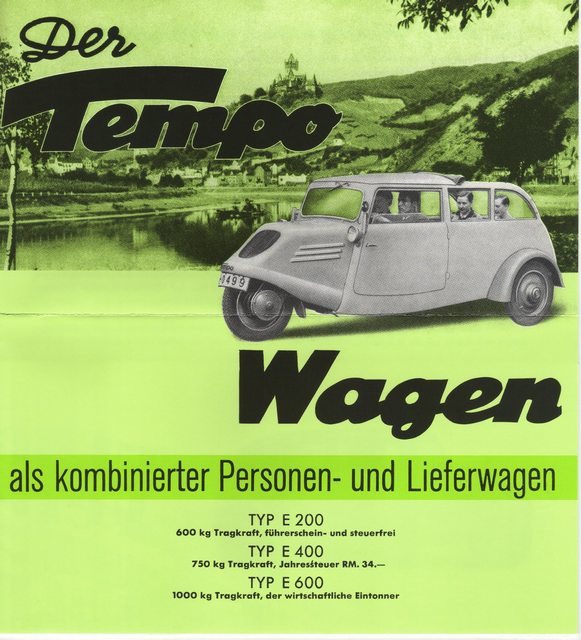 Demand for the D 400, Tempo’s best-selling product, outstripped factory capacity, resulting in Vidal and Son selling up their Wansbeck factory and buying the 60,000 m2 Goliath factory in Harburg-Bostelbeck. In 1935 Tempo celebrated the production of their 10,000th vehicle. 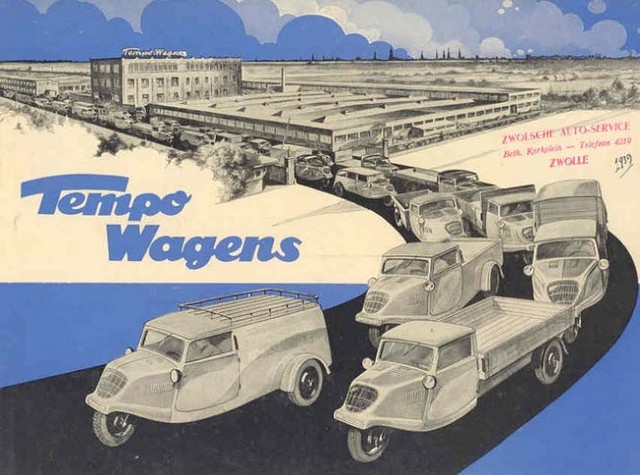 The reliability of Tempo’s vehicles was conclusively demonstrated on 5 November 1934 when three Tempo D 200’s competed in a 1000 kilometre speed and endurance trial at the Berlin AVUS, motor racing circuit. Although the vehicles didn't set any speed records, they successfully demonstrated their well-known qualities of endurance and economy, completing the 1000 km course in 18:44:48 hours at an average speed of 53.333 kilometres per hour. Average fuel consumption was 7 litres of fuel per 100 kilometres. 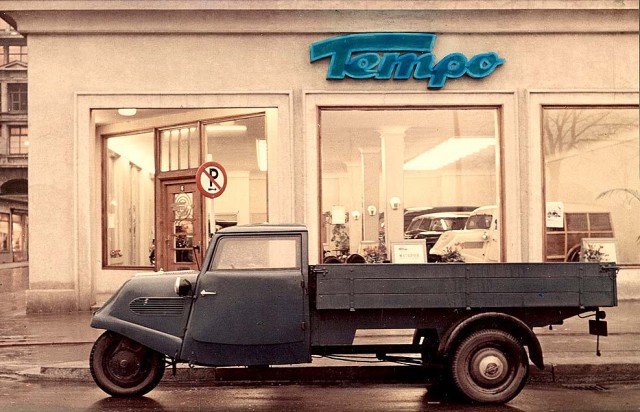 In 1936 Tempo released the ‘E’ range of tricycles. The E range were substantially more solid vehicles than their predecessors, featuring steel bodywork and a fully enclosed steel cab. Engines sizes remained the same. Sales surged and Vidal and Son were again forced to expand their new factory. With sales in excess of 14,000 per annum, Tempo finally overtook rival Goliath in the ‘kleinlaster’ small truck market. In 1938, the Nazi government regulated the auto industry, imposing controls over which company produced what. Tempo and Goliath were granted a duopoly of the commercial tricycle market.

Tempo continued to build its ubiquitous tricycles during the War, many serving with the German Red Cross and other emergency services. As the War progressed Tempo's factories were increasingly given over to war production and consequently suffered extensive damage from Allied bombing. Perhaps surprisingly, the destruction wrought on Hamburg enabled Tempo to survive as, although the Allies post-war plans for Germany included the total dismantling of German industry, transport was essential to clear the rubble and rebuild the country. The British Occupation Force permitted Vidal & Sohn to re-open their factory to provide service and repairs and for the next two years the Tempowerkes eeked out a meagre existence repairing damaged vehicles and returning them to the road. 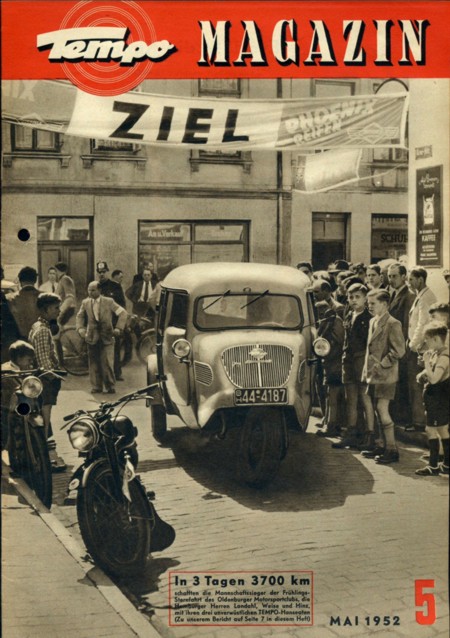 Although not officially licensed to build motor vehicles, by 1947 the company scrounged enough resources to build 100 tricycles, which were exported on a specially chartered train to Holland in exchange for food. 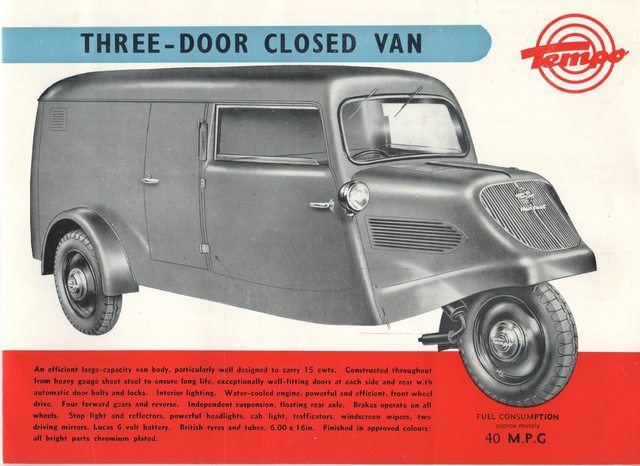 In 1948, the Western Allies implemented a currency reform and the Marshall Plan and the German "economic miracle" began. Tempo's cheap and hardy tricycles were just the thing and by the end of the year 3,500 tricycles rolled off the production line. 10,000 followed the next year. The factory at Harburg was now employing 2,000 people and had three construction halls. 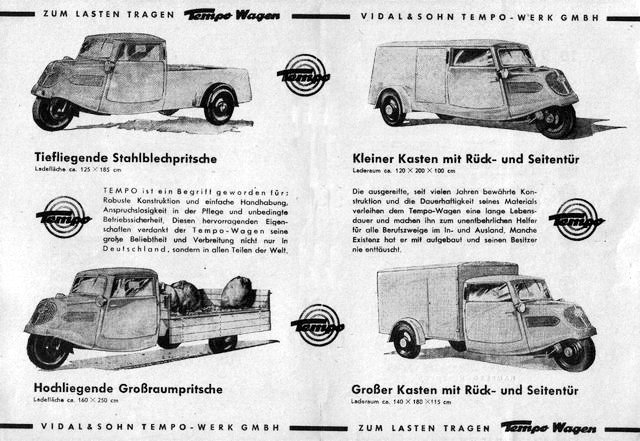 In 1950 the old A400 was updated, modernised somewhat and renamed the Hanseat and the A200 was renamed the Boy. Both were phased out by 1957. Special thanks to Paul Markham of the Project Tempo for valuable info and images!

Most informative article I've read on the early Tempo tricycle, T1 and T2, and later model Tempo trucks. A neighbor has a pre-1932 [with steering wheel] T1 tricycle. He drove it at a cruising speed of 17mph on the oval track at Pocono Raceway, about a year ago, at a Red Cross Charity Event.

i love this thing, i would drive it to work every day

I love the woody version.