This is one of the most unusual cars built in 1930s: 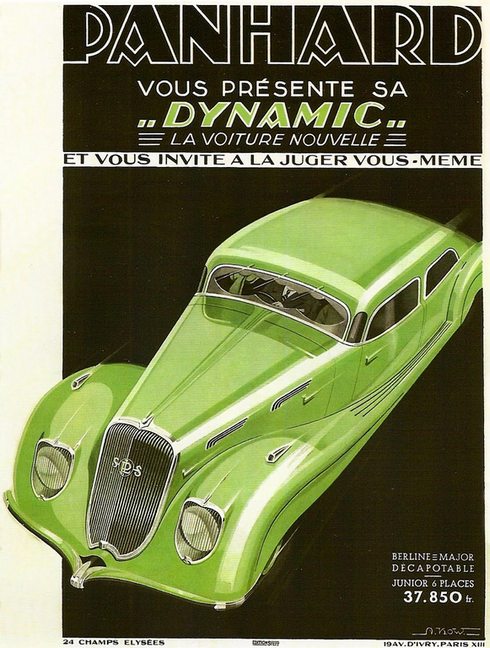 It was developed from Panoramique series with their "transparent" front pillars. Dynamic retained small curved windows in its windshield pillars but got completely new streamline body, designed by Louis Bionnier, with massive fenders and lavishly decorated hood. It was the largest unibody car ever built. Under its hood there was an inline-six 2.9-liter sleeve valve engine, produced by Minerva of Belgium. The engine was a cast-aluminium block. The steering wheel of this six-seater salon was placed almost in the centre of the dash. Later dozens of engineers (including Mr. Tucker) will try to re-introduce this layout... Well, probably it's too hard (for an engineer) to imagine a humble driver sitting between two corpulent passengers. Dynamic, being an odd mix of old and new, had very soft front suspension - independent with torque rods and two hydraulic shock absorbers on each side. 2581 Dynamics were produced from 1936 through 1938 (later X81 Series, shown above and below, had their steering wheel moved to the "conventional" position). It was the last large Panhard. After WWII the company changed direction and started to produce compact cars with aluminium body. But it's another story.