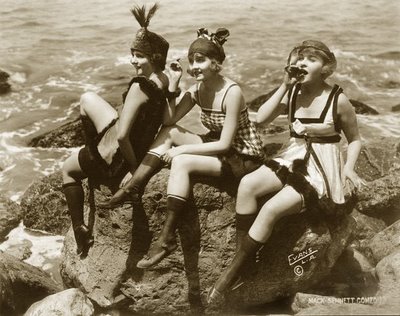 Roscoe Arbuckle, now more familiarly known as “Fatty” Arbuckle, left Sennett to make his own comedies at Paramount. With Arbuckle in this setup were two clever acrobatic comedians, Buster Keaton and Al St. John. Before the year was out, Sennett was making his Keystone comedies for Paramount. Charlie Murray, Ben Turpin, Louise Fazenda, Chester Conklin, and Teddy and Pepper, a dog and cat, were now the cheif Keystone comics.

Comment by Larry on August 5, 2010 at 7:03pm
Very nice. They certainly did a good job of reminding the boys what they were fighting for.

Comment by lord_k on July 30, 2010 at 1:42pm
Refreshing. Nice album.
Decades ago I had a coffee-table format book on early Chaplin movies. There were special sections dedicated to 'Sennet cops' and 'Sennett bathing beauties'.