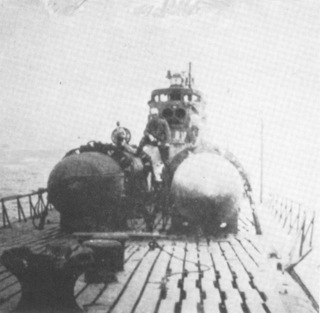 By late in the war, the Type 93 was proving its worth, but Japan was failing the fight. As a result the unmanned torpedo became a tool of the kamikaze and redubbed the Kaiten.

The Type 93 itself was a hazard to the crews handling the torpedo because of its use of compressed oxygen in ints propulsion system. Where as most torpedoes utilized compressed air, the oxygen produced more substantial results in the water. But it also was sensative to handle and could be explosive on its own if not respected.

Come 1944 Japanese naval weapons designers looked at adding a small crew capsule to the Type 93 envelope. Where the normal weapon mounted a half ton warhead, the Kaiten went to sea with a 3,400 pound warhead. And the overall length and weight of the Kaiten increased as well, as did the range, the latter marginally so.

The pilot, expected to not return from his mission, would sit in the center of torpedo, with the warhead in front and the engine compartment to the rear. Entry to the cramped suicide vessel was achieved through a hatch in the bottom of the Kaiten. The suicide sub was mated to a mother submarine, where the pilot would enter the Kaiten from. Depending on the size of the sub, anywhere between two and six Kaiten could be taken to sea.

During its war-time use, Japanese forces claimed a substantial number of victories for the Kaiten. However, it's believed that two ships and a landing craft were sunk by Kaiten. Still, those sinkings meant the loss of over 160 officers and crews of the USS Underhill and USS Mississinewa. By contrast, a larger number of Japanese sailors and Kaiten pilots were lost because of accidents and failed missions. 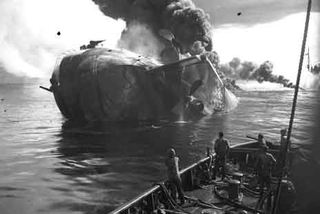 Somehow I don't think having a highly sensitive torpedo with a large warhead on any craft was a good idea to begin with. Results could mirror those of the Kodak grenade.

Simply awful, and completely insane...But I'm suddenly struck by the thought that these suicide-torpedoes and similar devices were almost like the far-off dark ages of our remotely controlled drones of today.  Instead of throwing lives at a problem, we're trying to keep them far from it. :p

Similar results to the Okha/Baka manned suicide rocket, it seems.