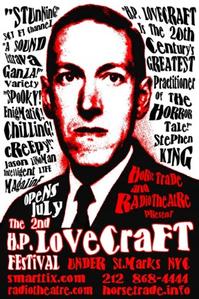 Due to popular demand The Drama Desk nominated, New York Innovative Theatre Award winning Radiotheatre will present their 2nd installment of the H.P. Lovecraft Festival for nine additional performances, August 7-September 11 at UNDER St. Marks (94 St. Marks Place). This installment of the H.P. Lovecraft Festival features the cult horror classics, REANIMATOR and THE CALL OF CTHULHU, live and onstage for the first time complete with award winning sound design and original orchestral scores.

RADIOTHEATRE Now in it's 7th Season RadioTheatre combines the artistry created during the Golden years of Radio when Sound was king and Story Telling, along with great voices, music and sound effects...as well as, the individual imaginations of its audiences...were the primary ingredients used to provide a memorable, live, theatrical experience. Of course, we do like to add some 21st Century touches... such as cinematic scripts, fully scored orchestral sound tracks which you won‘t hear anywhere else, a plethora of aural effects and, sometimes, a few visuals, too...creating a unique production with non-traditional, modern, innovative stage presentation!

HORSE TRADE THEATER GROUP is a self-sustaining theater development group; with a focus on new work, it has produced a massive quantity of stimulating downtown theater. Horse Trade's Resident Artist Program offers a home to a select group of Independent Theater artists, pooling together a great deal of talent and energy. It is also the home of FRIGID New York - the first and only festival of its kind in New York City.