The Leica Model II introduction in 1932 was followed by the Contax Model I debut in 1933. These cameras, the pride of Germany, were considered 'superclass', satisfying the photogs' needs throughout the world, and receiving enthusiastic support. In those days in Japan, the starting salary of an elite university graduate hired by a bank (the best-paying job) was around 70 yen per month. In contrast, the price of the Leica camera was 420 yen. So this high-end camera was considered to be a "takane no hana (something far beyond reach)" for ordinary people. During those years, there was a Japanese man who attempted to make the first domestic 35mm focal-plane-shutter rangefinder camera** (hereafter called the 35mm rangefinder camera) by disassembling and studying the inner workings of a Leica II. This person was Goro Yoshida (1900-1993).

Yoshida was born in Hiroshima. He came to Tokyo before completing his middle school education and apprenticed at a company repairing and remodeling motion picture cameras and projectors. During the latter half of the 1920s, when Yoshida was in his late 20s, he frequently travelled to Shanghai, China to procure the necessary parts for his jobs. A story was told that Yoshida decided to make high-grade 35mm rangefinder cameras when he met an American trader, Roy E. Delay in Shanghai, who told him: "Why do you come over here to buy camera parts? Your country has already built good battleships and airplanes. If your people can make such good battleships, there is no reason why you cannot make your own camera parts."
By nature, Yoshida liked to tinker with machines and instruments, and he was already engaged in repairing and remodeling motion picture cameras and projectors. It was natural that Yoshida would be attracted to the making of cameras. 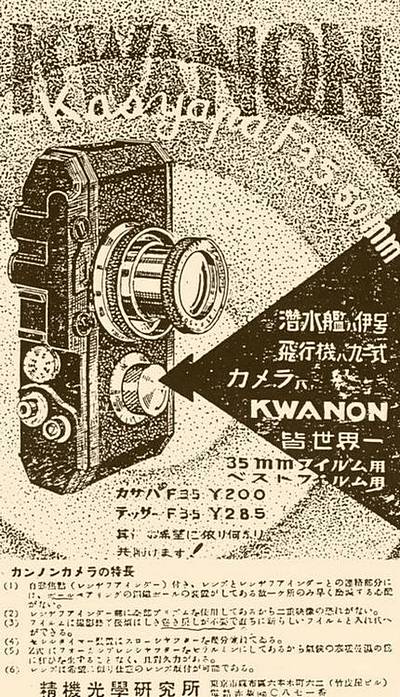 When asked about his motives in disassembling a Leica to produce Japanese made high-grade 35mm cameras, Yoshida explained in later years:

"I just disassembled the camera without any specific plan, but simply to take a look at each part. I found there were no special items like diamonds inside the camera. The parts were made from brass, aluminum, iron and rubber. I was surprised that when these inexpensive materials were put together into a camera, it demanded an exorbitant price. This made me angry".

With his brother-in-law, Saburo Uchida (1899-1982) and Takeo Maeda (1909-1977), a former subordinate of Uchida, Yoshida established the Precision Optical Instruments Laboratory to develop a 35mm rangefinder
camera in November 1933. 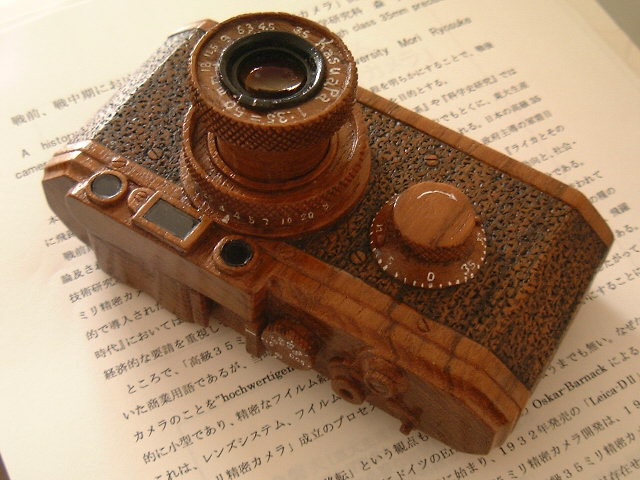 The prototype camera was named Kwanon because Yoshida was a believer in Kwannon, the Buddhist Goddess of Mercy. The camera's logo depicted a thousand-arm Kwannon Goddess, and even its lens was named "Kasyapa" which came from Mahakasyapa, a disciple of the Buddha. 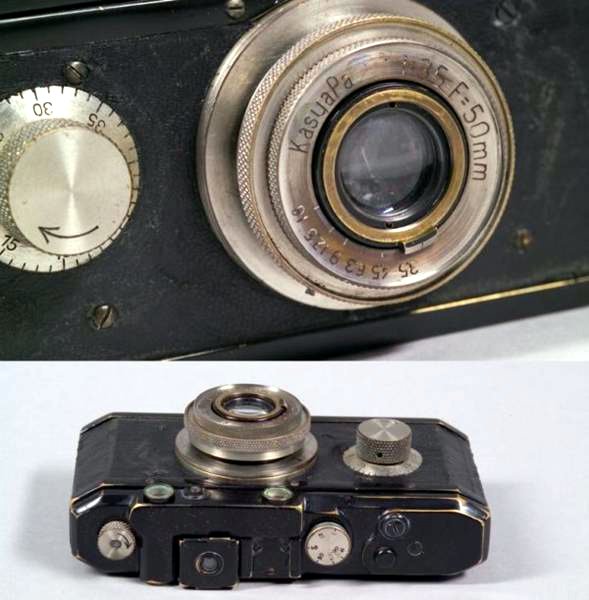 A total of three Kwanon camera variations appeared in ads but the cameras were all either an illustration or wooden models, not actual products. In other words, the Kwanon was never actually put on the market. Although Yoshida testified that he had completed ten Kwanon cameras, no one had actually seen any one of them. There was a camera called the "Kwanon Model D," discovered in Osaka around 1955, however, it was a copy of a Leica II, and was not made by Yoshida. The manufacturer of the "Model D" is still shrouded in mystery.
In spite of the intensive trial and efforts made to commercialize the Kwanon camera, Precision Optical Instruments Laboratory still had no prospects to procure lenses and rangefinders, essential components of a camera. After agonizing deliberations, the laboratory decided to elicit cooperation from Nippon Kogaku Kogyo (Japan Optical Industries, Inc., the predecessor of Nikon Corporation) to use their Nikkor lens.
Later, the name of the Kwanon was changed to Canon, which means "standard for judgement or biblical scriptures." "Canon," the new trademark for a precision industry company striving for precision as its motto, was born at this time. 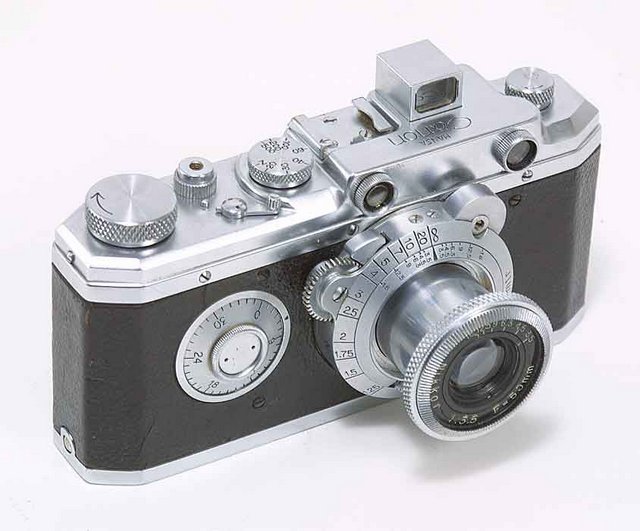 Following the "Hansa Canon (Standard Model)," the company successively introduced the "S or Newest Model" and the "J or Popular Model" in February 1939 and the "NS or New Standard Model" by the end of the same year. Yet, the company's production system was literally manual, especially in the finishing processes: using files to smooth the rough surfaces of the individual parts, or filling in the unwanted cracks in the camera bodies, etc. After the introduction of the "Newest Model," the word "Hansa" disappeared from the brand name, and was replaced with just "Canon." 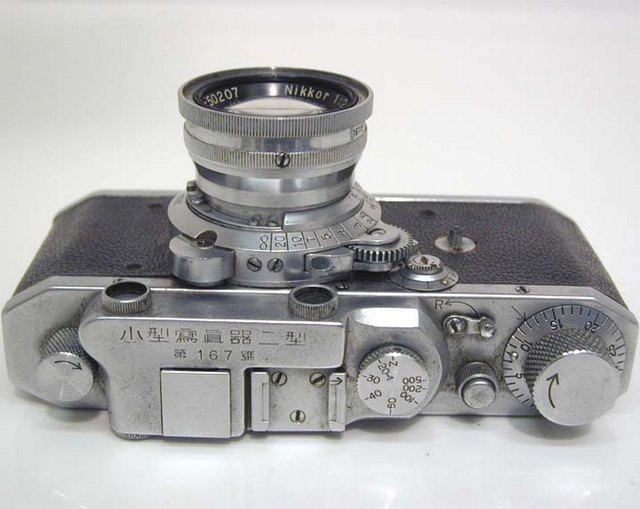 A rare Canon S with the Imperial Japanese Navy markings

The post-war goal of the company advocated by President Mitarai was "Catch-up with, and surpass the Leica."
The restoration opportunity for the company had arrived sooner than expected since the Allied Occupation Forces (centered on the U.S. Forces) showed great interest in Japanese cameras. Mitarai felt that it was not impossible to restart camera production, and submitted an application for production of consumer goods to the GHQ (the Allied Army General Headquarters). The application was granted on October 1, 1945, two months after the end of the war, for Precision Optical Industry Co., Ltd. to resume the production of cameras. 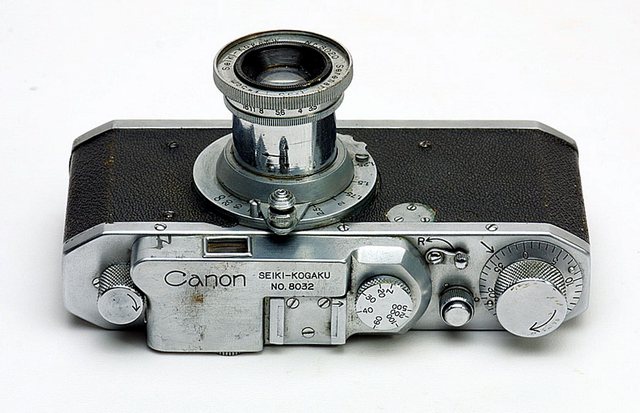 The first post-war model was called the "J II (Post-War Popular Model)," which was produced by scrounging up the components of previous models such as the "Standard Model." Being made of scrap, the post-war model had a unique shape to the viewfinder cover, which was different from that used for the "Popular Model." The record showing that only three cameras were produced in that year indicates the hardships endured by the company during its restoration. By the end of November 1946, one year after the resumption of the operations at Precision Optical Industry Co., Ltd., approximately 560 "J II" cameras had been produced. The steady growth of the production resulted from increasing demands for cameras "domestically exported" to the Allied Occupation Forces. In October of the same year, the "S II," a long awaited new Canon product, was introduced. It had the viewfinder and coupled rangefinder combined into a single window. This was an original Canon design that was not found in the Leica camera. While the "J II" model was considered to be the legacy of the pre-war "Standard Model", the "S II" camera was expected to play the cornerstone role for the post-war Precision Optical Industry aka Canon.
----------------------------------------------
* Text: Canon Camera Museum (edited)
** To avoid any misunderstanding I have to point out that the camera production in Japan started as early as in 1927. By 1933 there was a number of medium-format camera manufacturers.
*** With all my respect to the Japanese engineers and entrepreneurs I must admit that the early Canon was designed to resemble Leica as much as possible - without copying it. A direct copy could easily spark legal action. And its bayonet, developed by Nippon Kogaku, is modeled after Contax. It even accepts some Zeiss lenses with Contax mount (not trouble-free, though).

Comment by Piper Williams on March 8, 2010 at 7:43pm
Beautiful Machines. It's history and quality like this.. that concretes my positive feelings for the Canon. Without a doubt one of my favourite camera companies. .

Comment by lord_k on March 8, 2010 at 7:41pm
Played with their 7D recently. Got quite positive impression. Personally, I've been an Olymus guy for nearly two decades. Now I use a smart little Panasonic LX-3.

Comment by lord_k on March 8, 2010 at 1:43pm
Skilled labor + precision + quality control + unique patents. When Seiki Kogaku managed to enter the market with their Hansa Canon, the price was over 300 Yen - not a fraction of a Leica tag, but about two thirds. Don't forget that the Japanese labor force was much cheaper than the German.