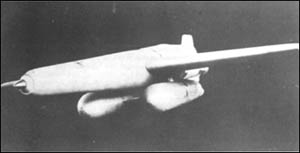 It's said that in war, the victor writes the history. However, when World War II closed and the Allies won a decisive victory, it was German technology that earned hallowed place in the minds of many. From the Vengeance weapons to small arms, the Germans undoubtedly honed the cutting edge in many ways. And in part, due to pre-war advances and research, the Germans created a series of guided weapons that capture technophiles imagination.

From the X-4 and Fritz-X to the X-7, the Germans crafted air-to-air and air-to-surface weapons controlled by radio to unspooling lengths of wire or television.

Yet one of the more overlooked and ambitious air-to-surface guided weapons was predecessor of the air-launched anti-shipping cruise missile- the HS 294.

When the first versions of German guided weapons began fielding, Hitler issued an order they not be used over land for fear that unexploded ordinance would be captured by the Allies and reversed engineered. Eventually this order was retracted and ground targets were given the green light.

However, when the ban was enacted, anti-shipping and anti-aircraft guided weapons entered a swift pipeline of developments. One company, Henschel, threw their slide rulers into anti-shipping weapons exemplified by the HS-29X series.

Henschel Aircraft, taking the technological advances in remote controls from Siemens made in pre-war, created the HS-293 an air-dropped rocket-assisted missile. Initially radio guided the 293's operational frequencies were jammed by the British, forcing Henschel to examine wire-guidance. Considered the first guided missile to successfully attack a target, the 293 series is credited with killing over 1,000 souls during attacks on Allied vessels during the course of the war.

However, the 293 was the first step for Henschel, further refining the guided missile in the form of the HS-294. Effectively a rocket-assisted torpedo, the 294 was a streamlined weapon that was mated to a pair of Walter rocket motors and was rare hybrid of rocket and torpedo. 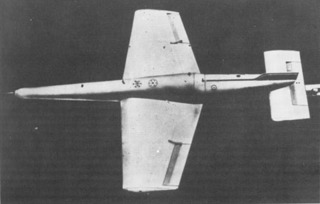 Dropped from a Luftwaffe aircraft, the HS-294 would fall away, rocket motors igniting and thrusting forward at over 140 miles per hour before the chemical rockets burned out. The 204 could be launched from as far as 12+ miles and over 20,000 feet from the target. Guided by a spotter in the launching aircraft, via radio and a flare in the missile's tail, the 294 would then slam into the water.

The 294's wings and tail would break away and using the velicyt built up on its terminal dive, the missile turned torpedo would track straight towards a target for up to 400 more meters. And should the 294 near an unlucky vessel, a standard German torpedo proximity fuse would detonate the torpedo charge.

Never used operationally, the unique guided missile-torpedo was an achievement that was ultimately subverted by technical meddling and the end of the war.

Next Week: Those machines that roll remotely.