On Wings & Tracks: Stand Off Weapons of World War II 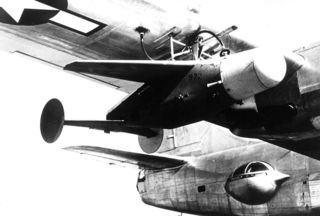 Mark Twain saw power in weapons guided from afar. He also saw money to be made in the devices conjured up by his friend, brilliant Serbian-American inventor Nikola Tesla.

You see, in the late 19th century Tesla created the first remotely operated vehicle in his teleautomaton, a small radio controlled boat. Tesla believed armies of the free world would line up to buy. They didn't.

However, the seed of practicality was planted and it would be 30 plus years before the first remotely operated weapons saw the fields of battle. We shall cover two types of weapons over the next few weeks, starting today with a guided weapon that can be called the effective precursor to today's smart bombs- the Bat.

The massive oceans of the Pacific and Atlantic were daunting stretches where threats lurked in every direction, in the air, on the surface and beneath the sea. To hunt and strike shipping or surface submarine threats from the air meant needing to hit first, efficiently and at a distance.

When the U.S. entered World War II it launched programs to find remotely guided weapons based on a number of guidance methods, from television, line of sight radio to radar. The Azon was America's first precision guided munition, but by 1943 it was superseded by another piece of dropped ordnance, the Bat.

A combination of simplicity and technology, the Bat was a 1,000 pound bomb encased in a winged and tailed airframe. A glide bomb, the Bat was guided to its target via a nose mounted radar system in a mostly wooden frame.

The Bat would be hung from the wing or belly of an aircraft, released at over 10,000 feet and glide towards it target at a maximum distance of 20 miles. The primary carrier for the Bat was the navalized version of the B-24 Liberator, with a glide bomb slung beneath each wing.

Once freed from its parent aircraft, the Bat would glide to its target completely autonomously. The parent aircraft would loose the Bat, activate the radar and leave to hunt other available targets.

The Bat was used against surface shipping, as well as coastal installations, bridges and moored support vessels. However, the early generation radar was susceptible to surface clutter (ie interference from nearby land within its radar field) degrading its full potential. It's simple "brain" ended up seeing too many things, big targets like mountains, confusing the weapon as it glided to terminus.

Yet the Bat would be built by the thousands and remain in service for several years after World War II.

Next week, we tackle Nazi Germany's entry to guided munitions. And in the following week's we'll profile those infernal remotely operated machines that rolled across the Earth in Europe, the Goliath and the Teletank.

Comment by Jon Knight on September 24, 2010 at 4:54am
The German Luftwaffe used the Fritz X, the Hs 293 and others, launched from its bombers, to deadly effect against some Allied ships in the Mediterranean Sea, such as seriously damaging the U.S. Navy cruiser USS Phoenix off Salerno, Italy. These all used radio command-guidance from the bombardiers of the warplanes that launched them. Some of these hit and either sank or damaged a number of ships, including warships offshore from amphibious landings on western Italy. These radio-controlled missiles were used successfully by the Luftwaffe until the Allied navies developed missile countermeasures - principally radio jamming. The Allies also developed some of their own similar radio-guided AShMs, such as the "Tiny Tim" and the SWOD-9 "Bat", but these saw little to no use in combat.