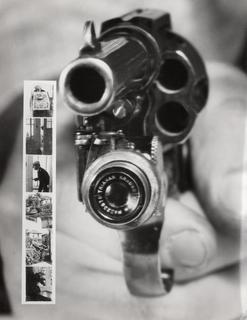 Late last year I wrote about the what's old is new again craze of mounting illumination to weapons. Nearly a year later I am diving back into the idea of weapon's accesories, but this time the idea of mounting a camera to a handgun.

In 1934 a New Yorker had a simple idea that took 80 + years to become practical. Abraham Kurnick devised a miniature still camera that could be mounted to any revolver.

Kurnick's mini-camera was created with police use in mind. Every law enforcement officer is responsible for every round discharged in the line of duty. No "spray and pray" because one errant shot could end a life and make the officer and department liable.

And so Kurnick wondered if a small camera could be mounted below the barrel of a revolver, forward of the cylinder and take a photo for each shot fired.

His idea was born with such simplicity that is remarkable it never caught on.

Under six inches long, the camera held a spool of six exposures in a hexagonal cylinder loaded on the left side. A rod slaved to the trigger of the revolver operated the shutter inside the six ounce camera.

When the trigger was pulled, the shutter of the Kurnick camera was opened and the film exposed. The shot was fired, the trigger released and the shutter closed again. A total of six images could be captured, perfectly timed for every round. It was probably blinded by the muzzle when actually fired. And I doubt the mechanisms actually stood up to more than a few firings. Something with modern digital tech would be very interesting.

Talk about ahead of his time. Wow.

Very oddly interesting! Sure would make it a bit tough on the Quick Draw, but gives a whole other meaning to ~ shooting ~ pictures!!! (Yeah, SOMEBODY had to say it. LOL)

Very cool idea! One way to gather evidence as to who's story fits the moment of the shots fired.