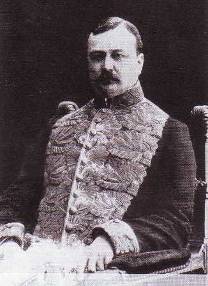 Pyotr Petrovich Shilovsky was an outstanding person - aristocrat, jurist, statesman, court, governor of Kostroma and Olonets governorate and inventor. In 1909 he patented "Устройство для сохранения равновесия повозок или других находящихся в неустойчивом положении тел" ("The balance maintain device for vehicles or other bodies being in unstable position"), in 1911 he built a working model of monorail railroad wich has been demonstrated on Russian technical society's exhibition in St. Petersburg, his "orthoscope" (the gyroscopic cource keeper, if it is correct translation for "гироскопический курсоуказатель") has been used during World War I on russian "Ilya Muromets" bomber. His work on gyroscopic monorail continued after the Revolution and Civil War, in 1921 there were 12 kilometers of railroad between Petrograd and Detskoye Selo built, but in 1922 project was closed and Pyotr Shilovsky has been compelled to leave the country. It's hard to believe, but he never got special technical education.

The Gyrocar itself. Shilovsky is on front passenger seat.

But in 1914, in London, Pyotr Shilovsky showed his most amazing and fascinating invention (in my humble opinion, of cource) - the Gyrocar. It was two-welled automobile, wich used two gyroscopes to maintain balance. It was able to run on low speed without loss of stability, and four passengers can enter,exit or change their seats. This vehicle was manufactured by Wolseley Tool And Motorcar company. Sad, but the Wolseley's Gyrocar prototype was first and last - it haven't reach the serial production. The prototype was abandoned till 1938, when it was found, restored and displayed in Wolseley museum. After the WWII it was broken up for scrap. There were another two-welled car models, like Gyro-X by Alex Tremuls and Thomas O. Summers, but they was unlucky too. More information about Gyrocar in english can be found in http://www.wolseleyworld.com/oddities-gyrocar.php and http://www.aqpl43.dsl.pipex.com/MUSEUM/TRANSPORT/gyrocars/schilovs.htm. And here is some info about Pyotr Shilovsky, with interesting images: http://www.vitanar.narod.ru/autors/ChernenkoGen.htm