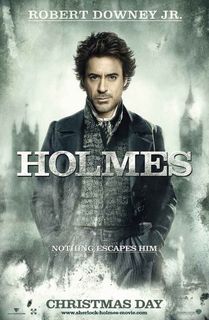 Before I begin reviewing Lock, Stock, and Two Smoking Detectives, let me rehash its pedigree. Under the guise of Holmes’ loyal sidekick Dr. Watson, Sir Arthur Conan Doyle wrote a successful series of detective stories between 1887 and 1914 starring the infamous Sherlock Holmes. Each story focused on a seemingly impossible crime that was slowly unraveled thanks to the brilliant deductive reasoning of Holmes and the globe-trotting experience of Dr. Watson. Using an equal mix of brain-power, science, and city networking, not even the tiniest clue went by unnoticed without Holmes’ knowledge. He was eccentric, moody, addicted to both cocaine and morphine, and certainly held a lofty idea of himself. Needless to say, Robert Downy Jr. was the perfect fit for this generation’s Holmes.

Fast forward to 2009, we now have Guy Richie at the helm. Guy has a few solidly British works under his belt including cult favorites Lock Stock and Two Smoking Barrels, and 2000’s Snatch. His style is frenetic, and full of MTV editing (if you can still remember when the M stood for Music), and that might be this movie’s saving grace.

The story itself is fairly shallow, taking care to highlight every single character nuance Doyle spent several books revealing. While this does give the audience a solid idea of what makes Holmes and Watson work together so well, it leaves little time for the action/ adventure story that Richie is obviously foaming at the mouth to make. When the action does fire up, the camera work drags us by the collar like a stubborn dog throughout a glorious reproduction of old timey London.

Visually, the movie is a winner. The set pieces are excellent, as are the costumes, and all of the visual elements click together nicely. The main characters have good chemistry, although the B-list have as much flavor as DoubleMint gum. After five minutes on-screen, they instantly lose their flavor and you start hoping for someone else to cold-cock the Downy just to keep the energy flowing. As for the ears, Sherlock Holmes’ soundtrack was a strange mix of Irish folk songs and some kind of string work that sounded like tinnitus that always cued during the action scenes. It was uncomfortable while happening and sadly forgettable shortly afterwards. If you remember the string noises that accompanied the Joker during The Dark Knight, it was similar but much more electronic and annoying.

Altogether, Guy Richie’s “Sherlock Holmes” is fun if you’re a fan of the stories, or a fan of action/adventure. The main characters are witty and work together well, the source material is preserved (even taking direct bits of dialog from “Sign of the Four” at places), and it’s a feast for the eyes. Do you need to rush to the theatre to watch it? Since there’s no 3D gimmicks or epic landscape shots that beg for an IMAX screen, you’ll be just as comfortable watching it at home.

(Sherlock Holmes is rated PG13 for violence and action)

Comment by Tome Wilson on January 26, 2010 at 1:13pm
I read the web comic for Daybreakers and found it to be embarrassing source material to make a movie out of. If you like vampires and dieselpunk, check out Perfect Creature from 2006. It's not good, but it's not bad either. And it's very pretty.

Comment by Marian Whales on January 20, 2010 at 1:20am
Yes! Sherlock Holmes is so damn cool. I just watched it. Have you watch daybreakers online too? OMG, the movie is full of vampires and humans are being hunted. I just hope that wont happen in the real world. :)

Comment by Deven Science on January 3, 2010 at 1:43am
I thought the movie quite ordinary and bland, and I'm normally a big Richie fan. I just didn't think the case was worthy of Holmes.

Comment by Tome Wilson on December 29, 2009 at 9:31am
Indeed. Just wait until tomorrow for a nice surprise.

Comment by Neil Crompton on December 29, 2009 at 6:08am
I'm still undecided whether to see this or not. Growing up I was spoilt with the goodness that was Jeremy Brett's Interpretation. I don't know if it was ever exported beyond our shores. But if you want to look it up it was filmed by Granada TV.