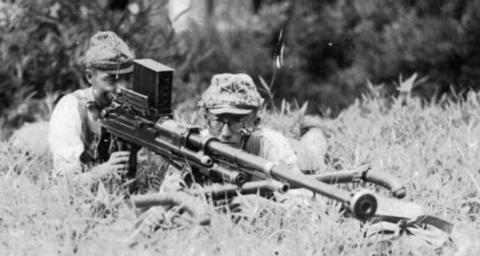 Twenty millimeter rounds have traditionally been the ammunition fired from mounted weapons, like aircraft cannons and anti-aircraft guns. Occasionally, they can be found in semi-automatic shoulder fired weapons in the anit-tank role. Those weapons are particulalrly heavy and punishing to the firer.

That Japanese Army fielded one such beast during World War II as the Type 97 anti-tank gun.

At 150 pounds, the Type 97 weighed as much as the operator who wielded it. So heavy was the weapon that while it was said it could be carried by a two man crew, a cradle and handle assembly that could be attached to the gun meant it was more likely born by four men. Looking like bicycle handles, the bars could be mounted beneath the barrel or at the stock. More often than not the heavy metal carrying handles were discarded to save weight.

Heavy, the Type 97 was also not very small. With butt extended (slight retractable stock was built into the rear of the gun) the Type 97 was nearly seven feet long from muzzle back. Half of that length was the barrel.

Placed and loaded, the Type 97 had adjustable bipod under the gas-assembly and monopod below the stock comb. Early use of the Type 97 proved effective. However, as the war moved on, the 20mm round found limited effectiveness against American armor.

At 250 meters the armor piercing rounds could penetrate 30mm of armor, which meant classes of tanks and armored vehicles easily deflected the 20mm round. However, the Type 97 could be used against soft skinned vehicles, light armored vehicles and even slow moving/landing aircraft.

The beast of a gun lasted through the length of the war, proving reliable but never a force to be reckoned with.

That sounds like an awesome gun, though I have to admit, I do wonder why Japan never had a good infantry anti-tank weapon throught out the war. Although I did hear that the did get a bazooka like weapon ready when the Allies invaded, they never had it ready for the general fighting in Pacific island campaign or New Guinea

Ejection of spent cases can go in really any direction, except back in the direction of the feed. Many late 19th century and early 20th century designed sustained fire weapons had downwards ejection. Everything from the M2 .50 cal to the modern P90 PDW eject rounds down. They do pile up, but it is rarely a problem. Often the short bursts recommended in training keep the piled casings to a minimum. But anything can happen in combat.

As for the full-auto, it is a simple engineering decision of making it semi-auto or select fire. And a burst of 20mm rounds, even if short, can be intimidating more than deadly accurate. But, making a small capacity weapon automatic is not too wise, you are right.

I'm still a bit fuzzy why they bothered with the full-auto functionality at all.  It seems excessive, given the limited magazine, and dear God!  Their shoulders!

Is it typical to eject spent rounds downward?   I imagine that would pile up.

nice one. good gun for "dieselpunk-flavoured" mechs, exo-skeletons and super-heroes (or arch-villains).