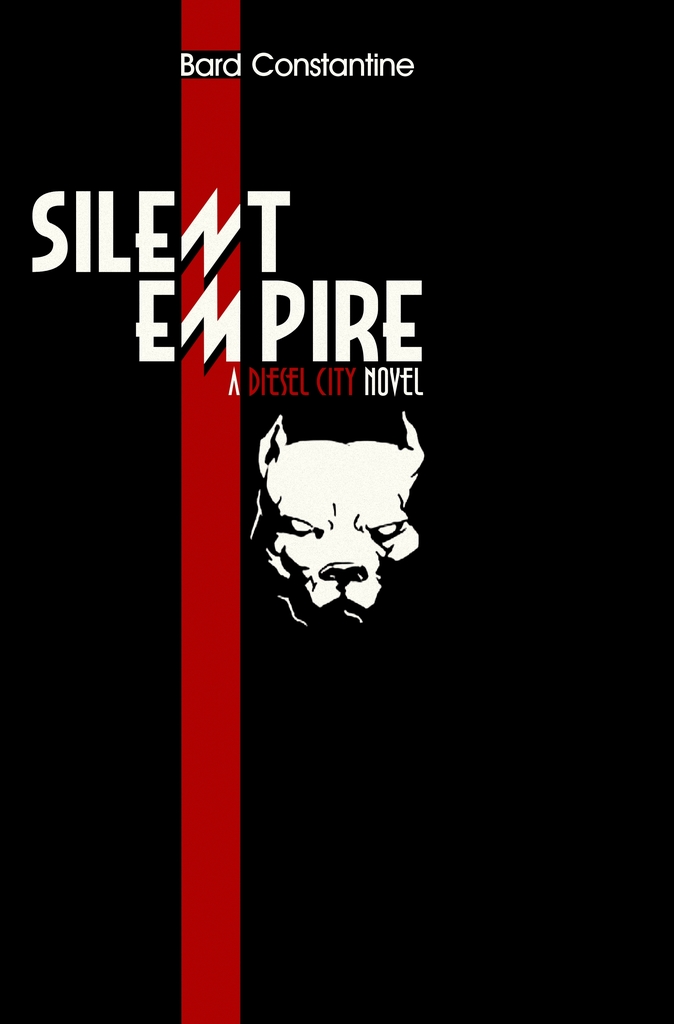 I don’t collaborate often. But when I do, I prefer Stefan.

Stefan is no stranger to Dieselpunks. His work is often paired with the very idea of dieselpunk, the artistic standard bearer for the culture. I’ve had the honor of working with him on my Troubleshooter novels. His iconic images have created a visual reality to the world of Mick Trubble and New Haven, something for which I’m eternally grateful.

At long last I’m able to take a step to return the favor.

I’ve enjoyed all of Stefan’s work, but one series in particular captured my interest. It’s entitled Silent Empire. His images tickled the imagination, full of oppression and propaganda along with the bizarre and surreal depictions of dog-faced men and indoctrinated slaves listlessly performing their menial tasks under the dominion of a tyrannical government.

It was a story just begging to be told.

The result is a novella that will launch on July 1, 2013. The description:

‘Silence is essential. Question nothing. Obey everything.  Those are the words that Franklin Gamble has heard all of his life. But when an encounter with a stranger causes him to question his reality, he is set on a road to discovering secrets that shake the very core of what he's been taught to believe.

Franklin is a man haunted by vision of a family he can’t remember and the growing awareness that his world is a fabrication by oppressors who control every aspect of his existence.  After being contacted by the mysterious Coalition, Franklin is reluctantly persuaded to find the answers that elude him.  His pursuit of truth puts him in a duel of wills against the Sovereign, the oppressive empire that uses the machine of propaganda combined with the brutal terror of their Dogmen to smother any spark of rebellion.

The Coalition reveals the Sovereign’s technological prowess that has trapped its inhabitants in a lethargic state that keeps its inner core protected by sleepwalking drones.  Franklin is the only person on the inside whose mind is active enough to resist and take action.  With time running out and his life at risk, Franklin must choose between defiance or submission; a decision that will either further imprison him… or shatter an Empire forever.’

It’s a nod to genre-bending films like Brazil and Dark City along with social commentary on government and oppression, but explores and takes place in the setting of Diesel City, the concept that he introduced in his tome of prose and images by the same name. I thank Stefan for the honor of allowing me to put words to his images and relate a story that he had already established through his extraordinary work.

Silent Empire is coming. I invite you to accompany us on the ride.

I'm certainly getting this one. :)