Slim Straight Recoil of the Campo-Giro 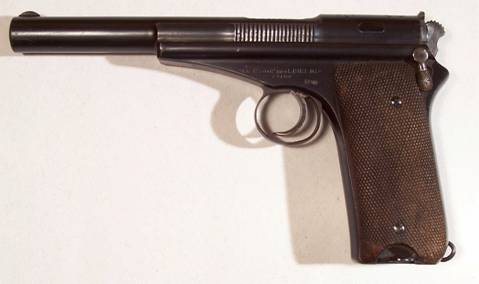 A far as aesthetics go, the Campo-Giro is one sleek little pistol. And it was born at the dawn of the 20th century.

In Weapons of War I've profiled a number of different methods of operation for pistols, from locking toggles to Browning actions. The Campo-Giro Model 1913 was simple in how it operated. The slim semi-automatic pistol relied on the rearward forces of the 9x23 Largo caliber to operate it.

Designed by the Count of Campo-Giro, witness to Spanish American War campaigns in Cuba, the pistol started out development in 1900 and went through refinements to eventually become adopted by the Spanish Army.

Well made and simple to operate, the Campo-Giro weighed just over two pounds and fired the Spanish 9mm round at just over 1,100 feet per second. The six inch barrel was encircled by a exceptionally strong recoil spring. When a round was chambered and the hammer dropped, the bullet would leave the barrel while the rearward force of the case moved against the slide mechanism.

Since the slide was not locked to the frame like other pistols, the recoil spring around the barrel physically slowed down the rear movement of the slide. As the slide moved back, the spent case was ejected and a fresh round stripped from the magazine in the grip.

Later generation of the same pistol moved the magazine release to the left side bottom of the grip plate.

One thousand Model 1913s were made before the change of the mag release. Thereafter 13,000 more Campo-Giro's were made.

I know this gun, and I know that is the precursor of the "Astra 400" which is technically superior. I had the pleasure of shooting many years ago, when have permission, the Astra 400 with  cartridges of "380. Superauto" which have the same dimensions of 9X23 and  have a nice experience whitout any disruption or extraction problems. We never dared to do the same with a Campogiro given its age (too old). The force required to mount is higher than other weapons, but his toughness is unquestionable. Perhaps the 9X23 cartridge, take much of the credit attached to it. The 9X23 was completely superior to the 9X19 but you need a miracle to find this caliber.  We use the .380 super auto in a "Star Supe A" succesfully, but the Campogiro is too old to try this caliber. This weapon was a hit in his time, but unfortunately, or not, Spain was a very far place in those years, and this gun was unknown. its designers were ahead of their time.