Hannes Bok is the pseudonym of Wayne Francis Woodard. He was born July 2, 1914 in Kansas City, Missouri. His father was Irving Ingalls Woodard, an electrician lineman from Chicago, IL. His mother was Julia L. Parks, a daughter of a prosperous lawyer that had moved to Chicago from New Hampshire. His parents met in Chicago while they were still students. They were both only seventeen years old at the time of their marriage on November 14, 1906. They lived at 200 Elgin Avenue, Forest Park, IL. Their first child died in infancy. Their second child, Irving Jr., was born one year later in 1909.

By the time Wayne was born five years later in 1914 the family had moved to Kansas City, Missouri, where the father worked for the Kansas City Power & Electric Co. A younger sister was born two years later in 1916, when the family moved to St. Paul, Minnesota, where the father worked for the St. Paul Gas Light Company. They lived at 193 University Avenue West.

On June 5, 1917 the father reported for draft registration in the Great War, at which time he claimed a military deferment on the basis of his working for a public utility and was "therefore a necessity."

1918 was a tragic turning point in the history of the Woodard family. Wayne was only four years old when his two-year-old sister died. His 30-year-old mother had a nervous breakdown and was hospitalized. The father was not able to care for both sons while working full time, so the older son was sent to the Minnesota State Training School (Work House) in Red Wing City, where he was taught to do "housework." Most of the inmates were teenagers between the ages of 13 and 17, but nine-year-old Irving Jr, was by far the youngest "inmate." Within a year the father had remarried a younger woman. The step-mother was 25 year-old Carolyn L. Woodard, a Minnesotan of French ancestry. They moved to 1024 Argyle Street in St. Paul, MN. 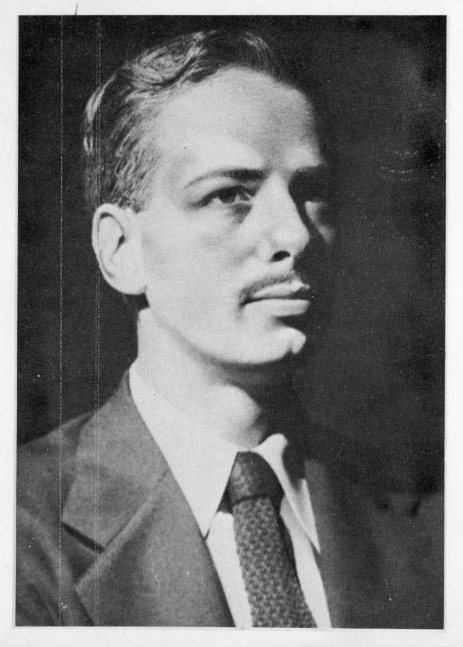 By 1930 Wayne was attending high school in Duluth, MN, where his father worked as an insurance agent and a new little step-brother, William G. Woodard, was born. They lived at 118 Fourteenth Avenue, where the monthly rent for the family home was $42. His relationship with his father and step-mother had grown bitter.

As soon as he graduated high school in 1932 he left home and traveled to Seattle, where his older brother Irving had already moved to live near their mother, Julia. She worked as a bookkeeper for a Seattle wholesale distributor and she lived at a hotel on 308 4th Avenue South in downtown Seattle, one block away from Union Station railroad terminal. Irving was 23 years old, married, and lived in Longview, WA. He worked as a carpenter and had served time in the Washington State Penitentiary in Walla Walla. Although his only art training had been high school art classes, in 1932 Wayne began to contribute unsolicited illustrations to science fiction fanzines, under the pen name Hannes Bok, which is a clever phonetic derivation of the famous composer's name, "Johannes Bach". 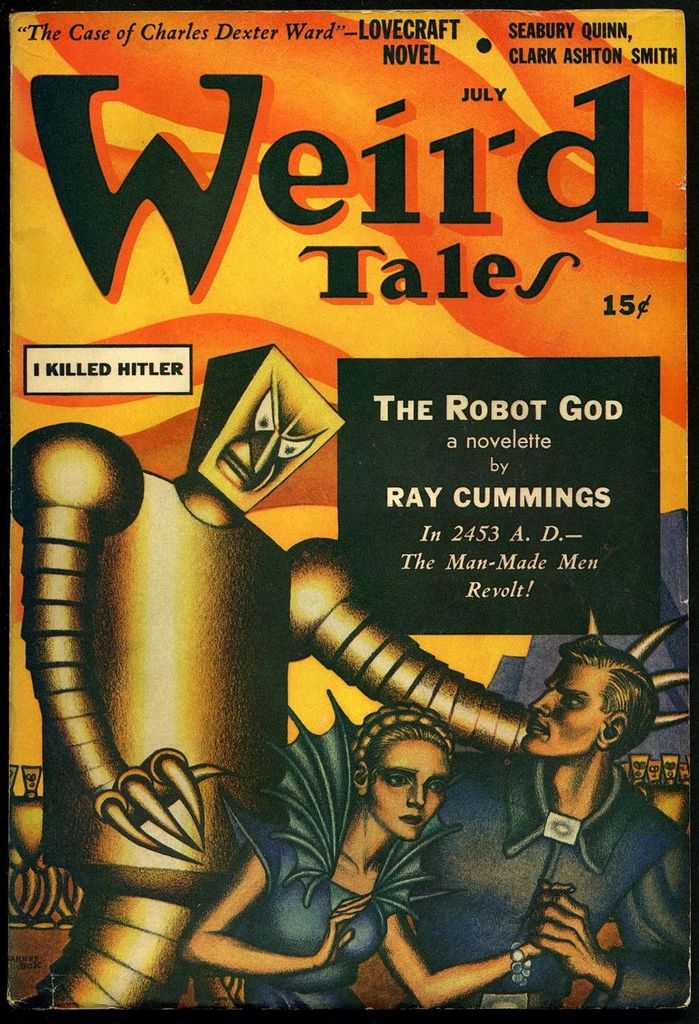 In 1939 he moved to NYC and began his long creative association with Weird Tales, where his work continued to regularly appear for the next fifteen years until 1954. 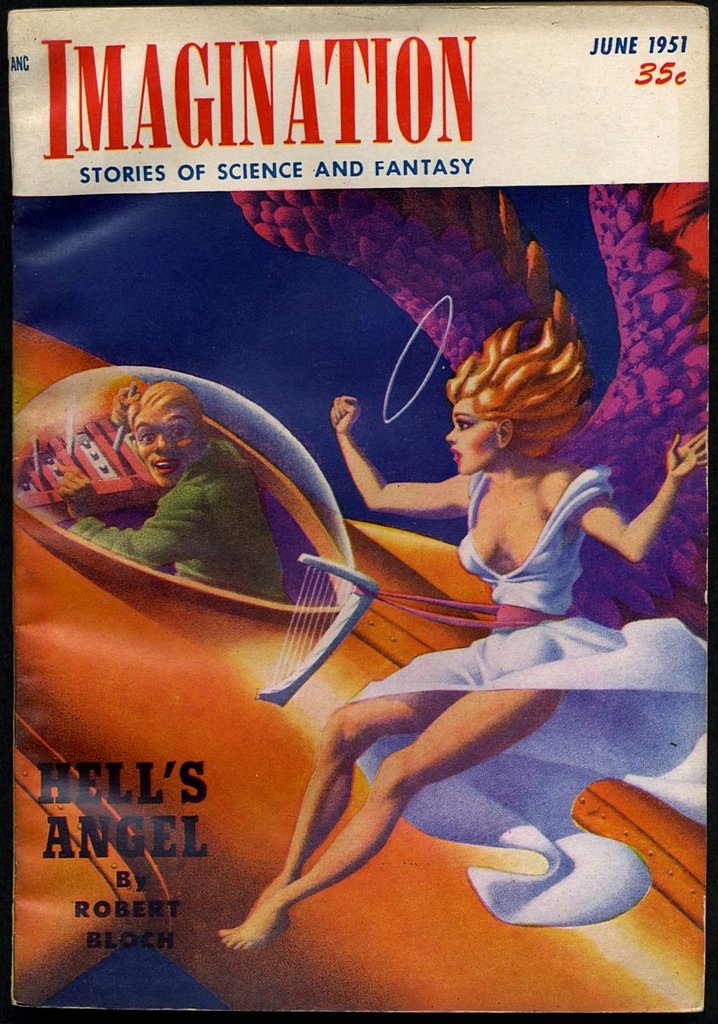 In the 1950s he wrote articles on astrology for Mystic Magazine and eventually became obsessed with the occult to an unhealthy degree. He grew increasingly reclusive, malnourished, and dysfunctional, as he wasted away in poverty. 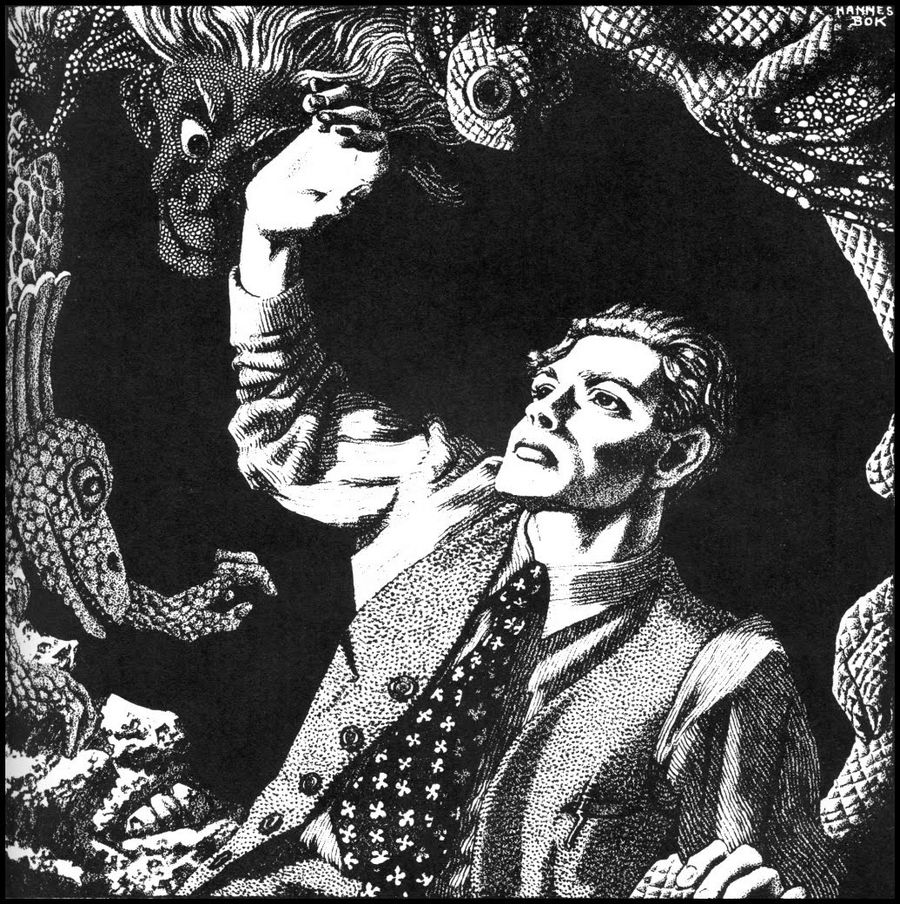 The Golden Age Comic Book Stories blog has a wonderful collection of Bok's graphic artwork and color covers. Look for "Bok" or "Hannes Bok". 76 images, mostly taken from this excellent source, are in our new album. You are welcome to browse it or to enjoy the slideshow: