The streamlined Art Deco styled shell of the locomotive was designed by Raymond Loewy. In 1937, Pennsylvania Railroad officials decided to build a new passenger locomotive to replace its aging K4s locomotive. The PRR officials also hoped that the new S1 steam locomotive would have performance equal to their GG1 electric locomotive. 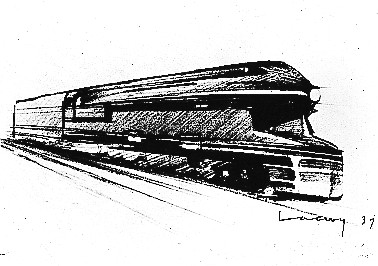 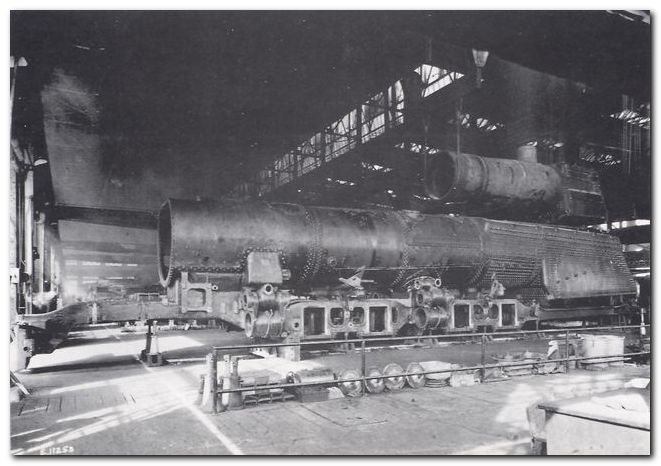 The S1 was the only locomotive ever built to use a 6-4-4-6 wheel arrangement. Also, the S1 class was a duplex locomotive, meaning that it had two pairs of cylinders, each driving two pairs of driving wheels. Unlike similar-looking articulated locomotive designs, the driven wheelbase of the S1 was rigid.

The S1 was completed January 31, 1939 and was assigned locomotive number 6100. It was the largest express passenger locomotive ever constructed, with an overall length was 140 feet 2½ inches (42.74 m). At 77 feet (23 m) long and a weight of 97,600 pounds (44.3 t), the cast steel locomotive bed plate made by General Steel Castings was the largest single-piece casting ever made for a locomotive application. 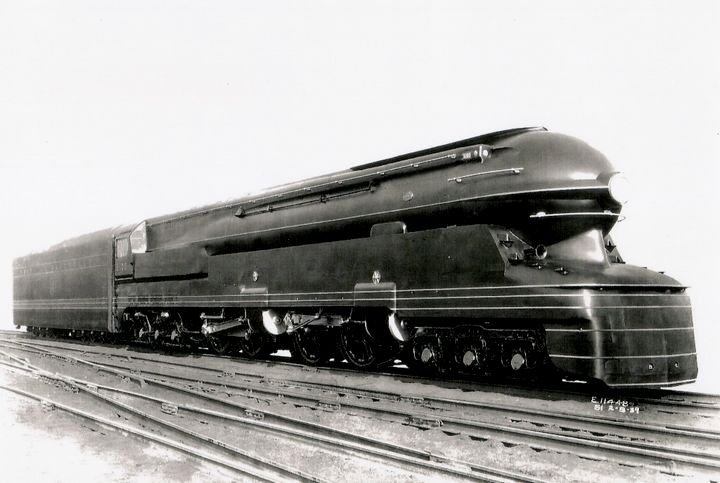 The boiler unit for the S1 was the largest built by the Pennsylvania Railroad. The six-wheel leading and trailing trucks were added, as the locomotive's design became too heavy for four-wheel units. However, the locomotive was still overweight by a significant margin. The streamlined Art Deco styled shell of the locomotive was designed by Raymond Loewy, for which he received U.S. Patent No. 2,128,490. The final construction cost for the S1 was $669,780.00. The S1 was displayed at the New York World's Fair of 1939 with the lettering "American Railroads" rather than "Pennsylvania Railroad", as 27 eastern railroads had one combined 17-acre (6.9 ha) exhibit, which also included the Baltimore & Ohio's duplex locomotive. To reach the New York World's Fair, the S1 took a circuitous route over the Long Island Rail Road. Many obstacles had to be temporarily removed and other obstacles were passed at a slow crawl to reach the fairgrounds. 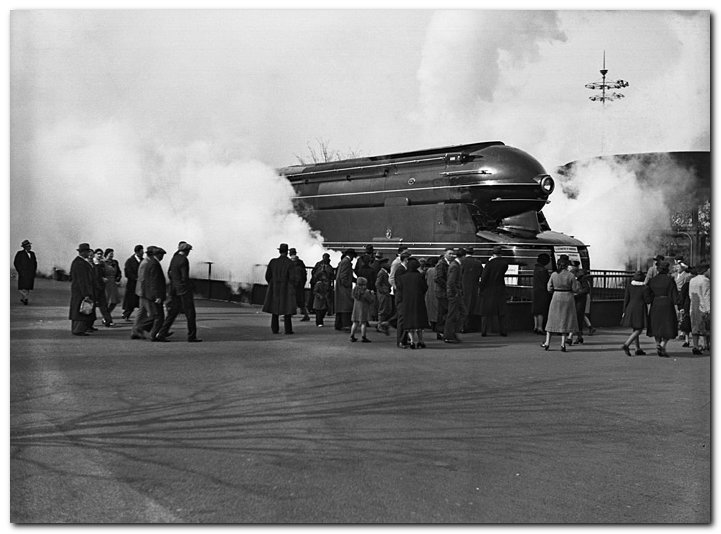 At the World's Fair the S1 was a dynamic display; the drive wheels operated under the locomotive's own steam power. This was done by placing the S1 on a platform that had rollers under the drive wheels. By using this type of display, visitors could see the duplex drive in use. 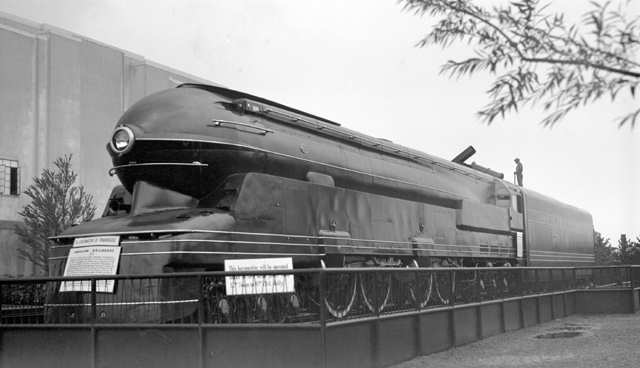 After the World's Fair, the S1 was relettered and numbered for use in the Pennsylvania Railroad fleet. The S1 was used by the PRR for publicity purposes as well and its image was featured in calendars and brochures. 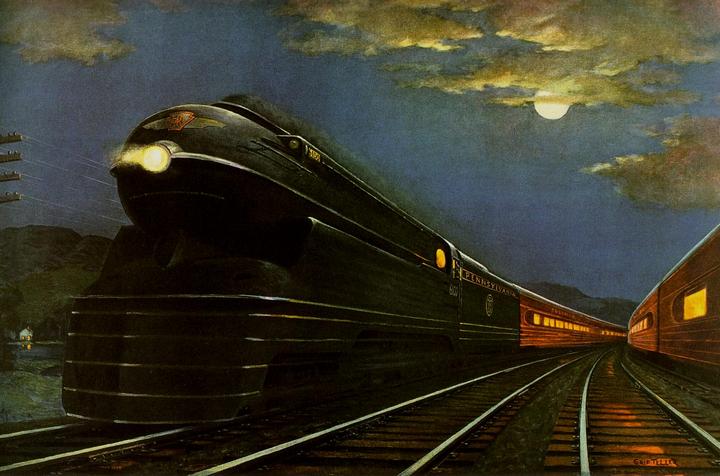 The S1 class locomotive was so large that it could not negotiate the track clearances on most of the lines of the PRR system. In its brief service life it was restricted to the main line between Chicago, Illinois and Crestline, Ohio. It was assigned to the Fort Wayne Division and based at the Crestline enginehouse. 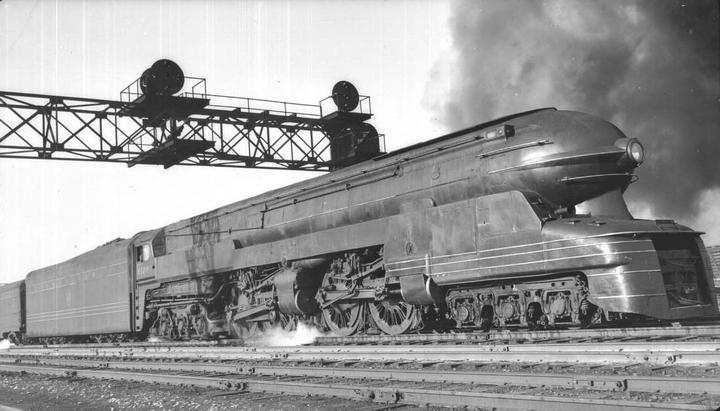 The S1 hauled passenger trains such as The General and The Trailblazer on this route. Crews liked the S1, partly because of its very smooth ride. The great mass and inertia of the locomotive soaked up the bumps and the surging often experienced with duplex locomotives. It was hoped that the locomotive could haul 1,000 tons at 100 miles per hour, but this goal was not reached. There are apocryphal stories of the S1 reaching or exceeding 140 miles per hour, but there is no documentation of this and it is considered unlikely by experts.[7] Its high speed capability was such that some have claimed the S1 may have even exceeded the 126 mph (203 km/h) record steam locomotive speed set in 1938 by the LNER locomotive Mallard. The locomotive was also rumoured to have operated at speeds exceeding 156 mph on the Fort Wayne-Chicago Railroad, as it was rumoured that the PRR received a fine posted by an interlocking tower on the division, proving the claim. However, it appears that no verifiable records are available to authenticate the claims.

Wikipedia article contains a special and rather lengthy Design Flaws section. I'd better turn to another source: Wes Barris' Steam Locomotive website. "While being an impressive puller, - Wes writes, - the 6100 turned out to be too long for most of the PRR trackage and turntables. It ended up in service only between Chicago and Crestline, OH. Even so, the 6100 proved to be both a public relations success <...> as well as a great learning tool for the T-1s that would be designed later. 6100 was taken out of service in 1944 (after only four years of service) and scrapped in 1949. To really appreciate how long this locomotive was, you must first have a frame of reference. Consider the Big Boy. The Big Boy was generally considered to be the "largest" steam locomotive ever. It was over 132 feet long. Unlike the Big Boy, the S-1 was not an articulated locomotive, yet, it was a whopping 140 feet long! I don't know what its designers were thinking, but the length of this locomotive was partly to blame for its failure. " What can I add? Streamline steam locomotives of the Diesel Era are so confusing: they are running on "old" power but their looks are ultramodern. So if a thing like the Ultimate Dieselpunk Steam Loco is not 100 per cent absurd, it must be the PRR 6100.

What an amazing machine! A sheer monster in size.