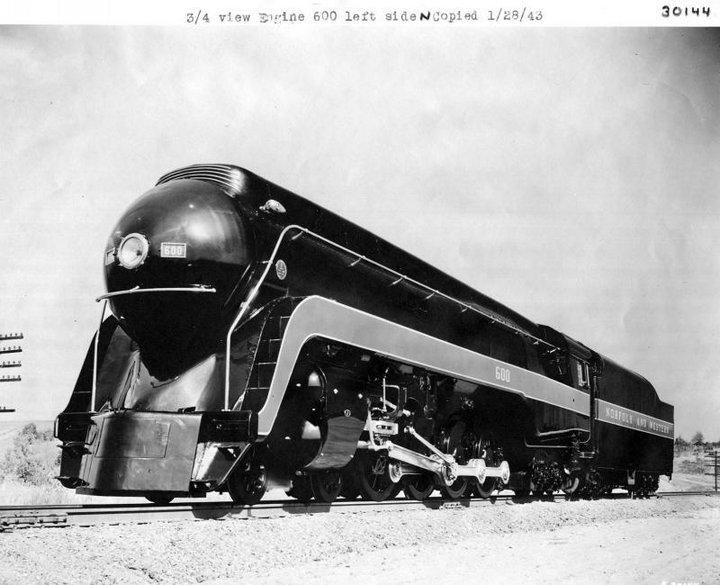 The first batch, numbered 600 to 604, were built in 1941–42 and were delivered streamlined. In 1943, 605–610 were delivered without shrouding and lightweight side rods, due to the limitations on the use of certain materials during the war; due to these distinctions, they were classified J1. But, when N&W showed the War Production Board the reduced availability numbers because of this, the Board allowed the J1s to be re-fitted as Js with the lightweight rods and shrouding in 1944. The last batch, 611–613, were built in 1950, all streamlined. The Js were built and designed completely by N&W employees, something that was uncommon on American railroads. The class should not be confused with the much earlier J class of 1903. The total cost for building 611 was $251,544 in 1950. The design of the Js was completely universal. They were equipped with 300 psi boilers, 70-inch (1,778 mm) driving wheels, and roller bearings on all wheels and rods. The 70 inch drivers and 300 psi boiler allowed for a higher tractive effort. When operating at maximum pressure, the Js delivered 80,000 pounds of tractive effort – the most powerful for 4-8-4 wheel arrangement locomotive without a booster. The engineers designed the J class to haul passengers at a high speed. The 70 inch drivers were very small for a locomotive that was to pull trains at over 100 mph. To overcome this, the wheelbase was made extremely rigid, lightweight rods were used, and the counterbalancing was extremely precise. As delivered, the Js had duplex (two) connecting rods between the primary (second) and third drivers, but in the 1950s Norfolk and Western's engineers elected they could do without these. Subsequently, 611 and at least one other Class J were rebuilt with a single connecting rod. The negative effect of the J's highly engineered powertrain was that it made the locomotives sensitive to substandard track. Its counterbalancing and precision mechanics were so modern that it was joked that the J's top speed is only limited by the nerves of the engineer. Judging by their performance in hauling a 15-car 1050-ton train at speeds in excess of 110 mph over Pennsylvania Railroad's "racetrack", the Fort Wayne Division, while on loan, it is hard to dispute that claim. The Js were the pride of the N&W, pulling passenger trains such as The Powhatan Arrow, The Pocahontas, and The Cavalier, as well as ferrying Southern Railway's Tennessean, Birmingham Special and The Pelican between Lynchburg, Virginia and Bristol, Virginia. Here are four pages from The Powhatan Arrow brochure, 1940s: 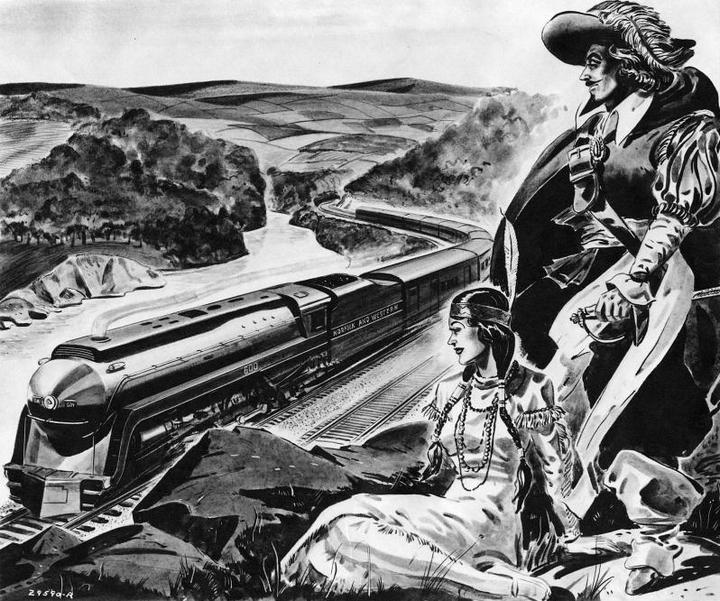 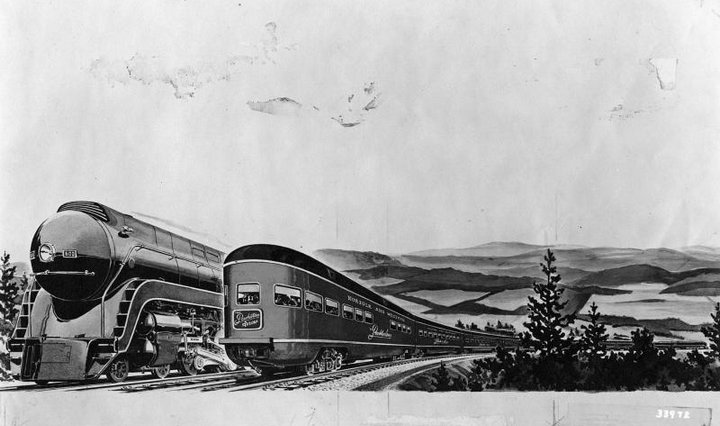 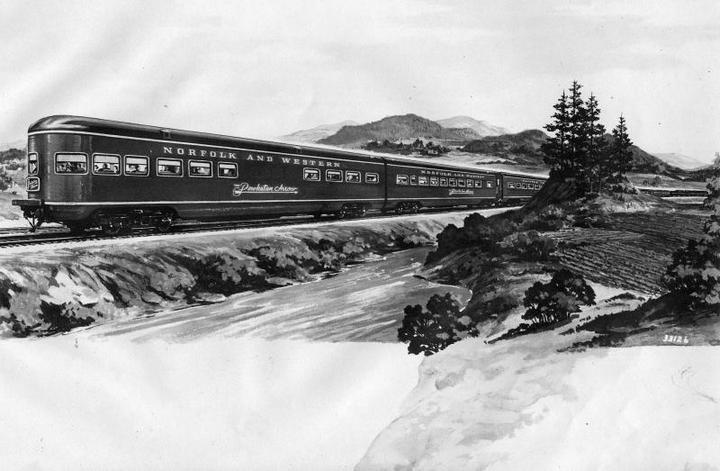 While on test on the Pennsylvania Railroad, number 610 proved that a J could pull ten cars at 110 mph along a section of flat, straight track. Despite the power and speed capabilities the Js were among the most reliable engines, running as many as 15,000 miles per month, even on the mountainous and relatively short route of the N&W. There is one notable accident in the J class's service history. On January 23, 1956, 611 derailed along the Tug River near Cedar, West Virginia while pulling the The Pocahontas. It was determined that the engineer ran the engine at an excessive speed around a curve and its high center of gravity caused it to flip on its side. Within a year, 611 was repaired and back up pulling the varnish. 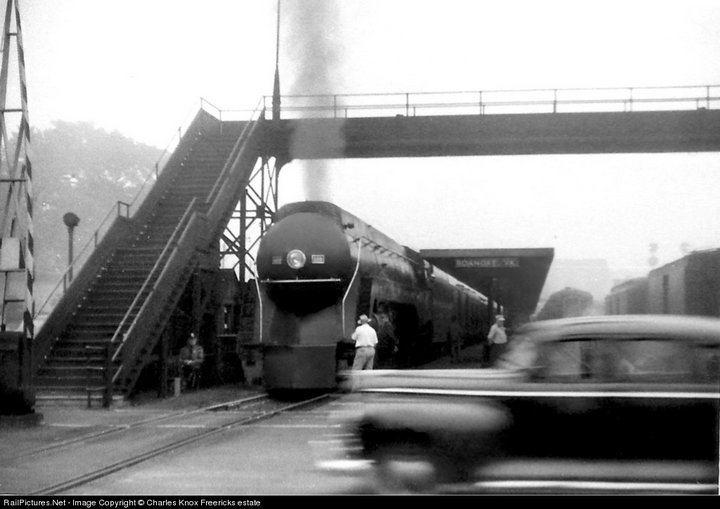 In the late fifties, N&W began purchasing first generation diesels, experimenting with fuel and maintenance cost. They leased several sets of EMD E-6s, E-7s, E-8s from the Atlantic Coast Line and Richmond, Fredericksburg and Potomac Railroads. The diesels proved to be cheaper in maintenance and fuel cost, but several were required to equal the power of a steam locomotive. In the end, with steam parts suppliers closing from other railroads switching to diesels, diesel prevailed and the clock began to tick until steam was retired. 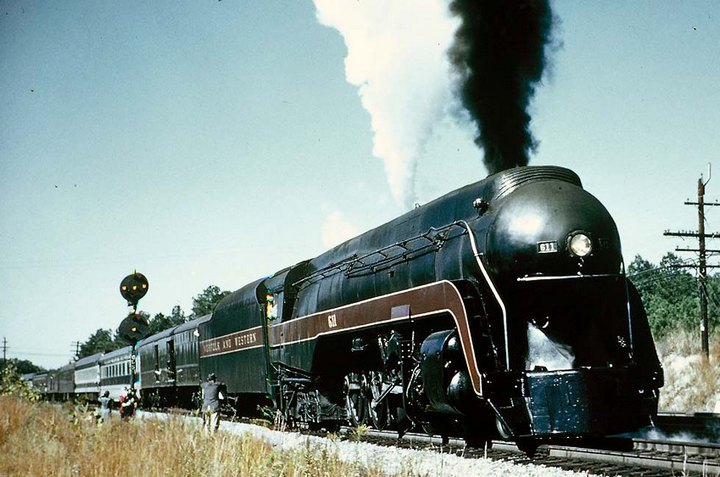 In 1958 and 1959, the railroad ran several farewell to steam excursions, with 611 pulling the last one in October 1959. While many of the locomotives went to the scrap lines, 611 was more fortunate, in part due to its superb condition after 1956 derailment and subsequent repair, and also in no small part to the efforts of O. Winston Link, the famous photographer, whose offer to purchase 611 himself, rather than see it scrapped, practically embarrassed N&W into donating it for posterity. 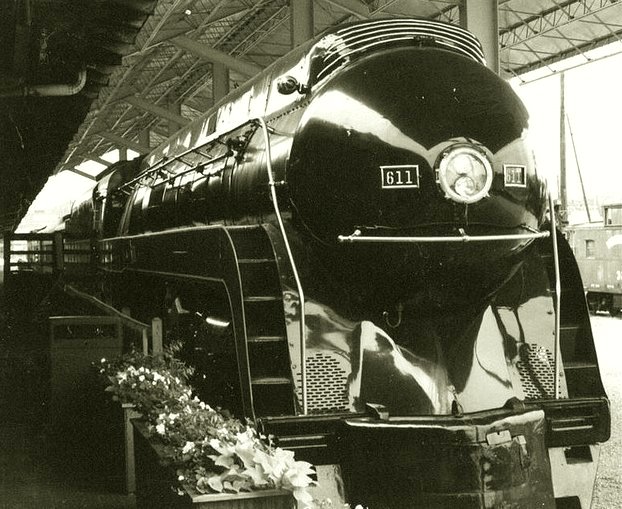 Due to the efforts of several men, including Link, 611 was saved. In 1960, the locomotive was donated to the Virginia Museum of Transportation in Roanoke, where it sat dormant for two decades.

In the early 1980s, Robert Claytor, president of Norfolk and Western in its last months, had his eye on 611. His brother, W. Graham Claytor, once president of the Southern Railway, was in charge of Southern Railway's Steam Program. This program had been around since 1966 with Southern Railway 2-8-2 4501, sending steaming ambassadors system wide. Robert envisioned something similar for the N&W with steam. He made a lease with the museum, and in 1981, 611 was sent to Southern Railway's Norris Yard Steam Shop in Birmingham, Alabama for an overhaul. In 1982, 611 emerged under steam, with the only change being a dual beam headlight instead of the single bulb lamp it carried in the fifties. That wasn't the only change that affected 611 during the rebuild: Norfolk and Western and Southern Railway had by now merged into Norfolk Southern. This now doubled the amount of track available for 611 to tour. 611's first trip was a ferry move up the Southern into Lynchburg, Virginia, and then over N&W home rails to Roanoke for a ceremony. In 1984 the American Society of Mechanical Engineers named 611 a National Historic Mechanical Engineering Landmark and it has since been added to the National Park Service's Historic American Engineering Record. For the next twelve years, 611 remained the pride of the NS system. Here is a small display of photographs taken in 1980s and early 1990s: 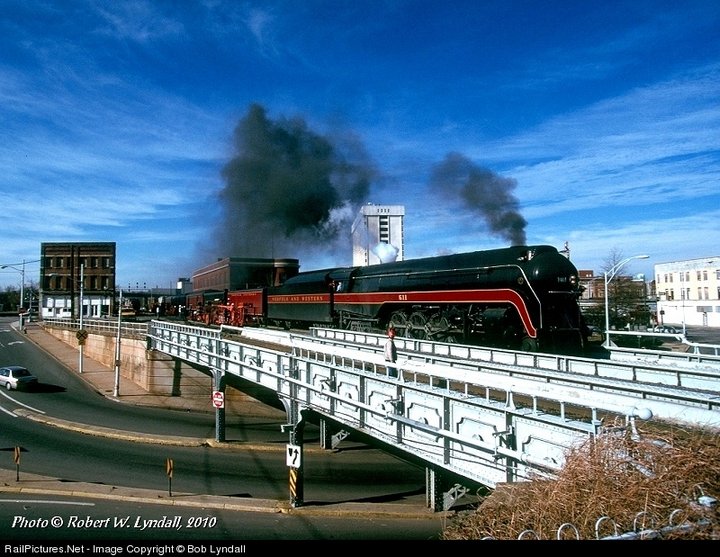 On Sunday, May 18, 1986, tragedy struck once again. 611 was at the head of an Employee Appreciation train from Norfolk, VA, with Robert Claytor at the throttle. One of the passenger cars picked a switch on the main through the Great Dismal Swamp, causing it and 12 other cars of the 23 car train to derail. Many of the nearly 1000 employees and their family members were injured, some of the more seriously injured had to be airlifted to hospitals in nearby Norfolk for treatment. Dorinda Butt whom was a volunteer EMT for Chesapeake at the time was on the train when it derailed making her the first emergency responder on the scene. In addition, the derailment prevented the use of the main line for freight traffic for some time. Had this been a public excursion instead of a railroad employee event it could have easily spelled the end of the NS steam program, regardless, this derailment brought a wave of change to the program, including the retirement of many of the older passenger cars. Despite rumors, the program chugged on, welcoming another locomotive, former Norfolk & Western 1218, a simple articulated 2-6-6-4. The two continued to pull the systems' trains until 1994, when another disastrous blow hit. In September 1994, there was a switching accident in Lynchburg, VA, involving the passenger cars of an excursion consist 611 was to pull the next day. This damaged several cars, causing a shortage, and the need for more cars. Only a month later, the news many had expected after the Great Dismal Swamp derailment was released. The executives of NS determined to terminate the steam program, due to rising insurance costs, increasing cost of maintenance, and a high system capacity. The last steam excursion was on December 3 from Birmingham, Alabama to Chattanooga, Tennessee and back, pulled by 611. The next day 611 set off on a three-day trek home to Roanoke. 611's last official day of being under steam was December 7, 1994, the 53rd anniversary of Pearl Harbor Day. Between Salisbury, North Carolina and Roanoke, 611 displayed black flags on the run. That evening, upon arrival at Schaffers Crossing in Roanoke, its fire was dumped for the last time. 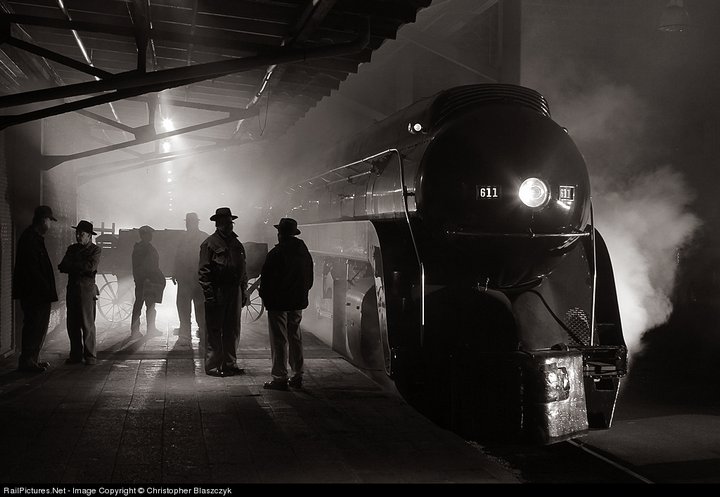 In 1995, 611 was put back in the museum, now known as the Virginia Museum of Transportation, under a new train shed. In 2003, a major renovation of the railyard brought a bigger train shed (The Robert B. Claytor and W. Graham Claytor Jr. Pavilion), and 611 was joined by twice former stable mate, 1218. Both locomotives sit at the museum today, along with many other regional railroad equipment. 611 remains in excellent condition (but it shows some signs of weathering, including a small crack in its bullet nose). If the locomotive is to run again, 611 will need new flues and upgrades to the new FRA Form 4.

As one of the last, most prominent, and most distinctive locomotives assembled in Roanoke, the 611 often serves as a symbol for Roanoke and its railroad history. The 611 is also depicted on the Commonwealth of Virginia's "Railway Heritage" license plate.

But J's were not the only N&W streamliners. In 1947, two M-2 class freighters/shunters were streamlined (read about these weird engines here):

Besides, several locomotives of K-2 and K-2a classes, the 4-8-2 "Mountains", were streamlined to supplement the J's. Here is #125 before and after streamlining: 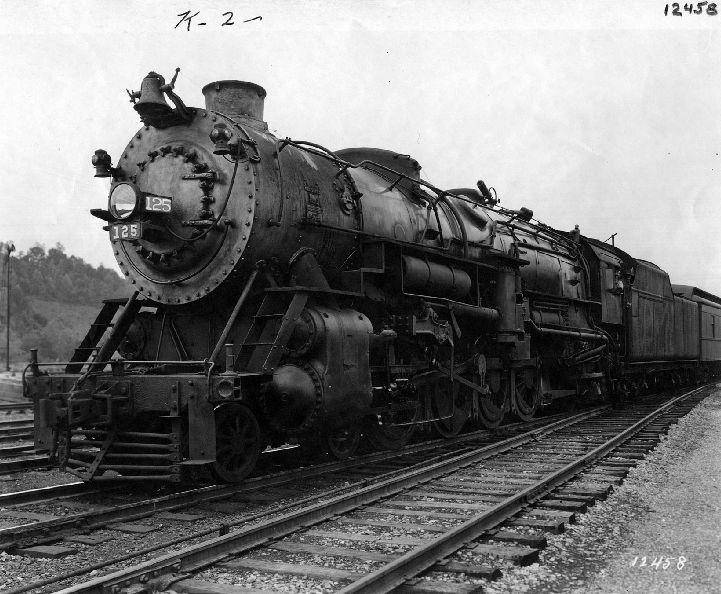 oldline1 of the Model Railroader Magazine Forum writes: "Before all 14 Js were delivered the K-2s were used on the Cavalier & Pocahontas as well as all other major trains. The Js were used on the 1946 Powhatan Arrow and the newer 1949 train sets. I've seen photos of the Ks on all these trains even in later years when, I assume, a J wasn't available. The Shenandoah line trains (regular trains & mixed trains) were regularly K powered as well as on the W-S District and most other secondary branches and trains. K-1s would also be used at times. Many locals used the Ks and E class Pacifics too. " 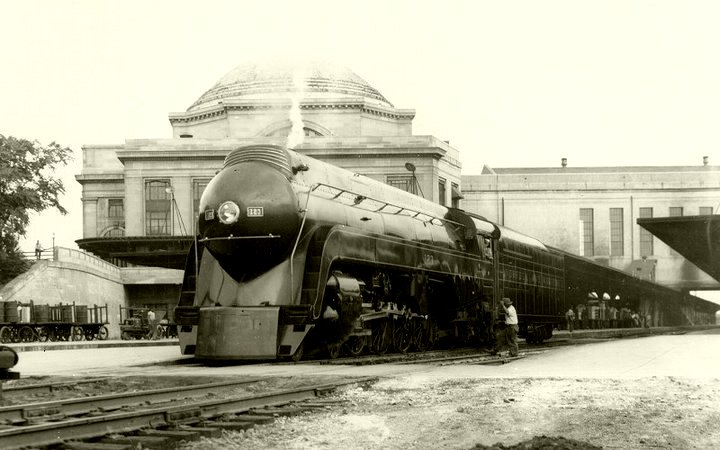 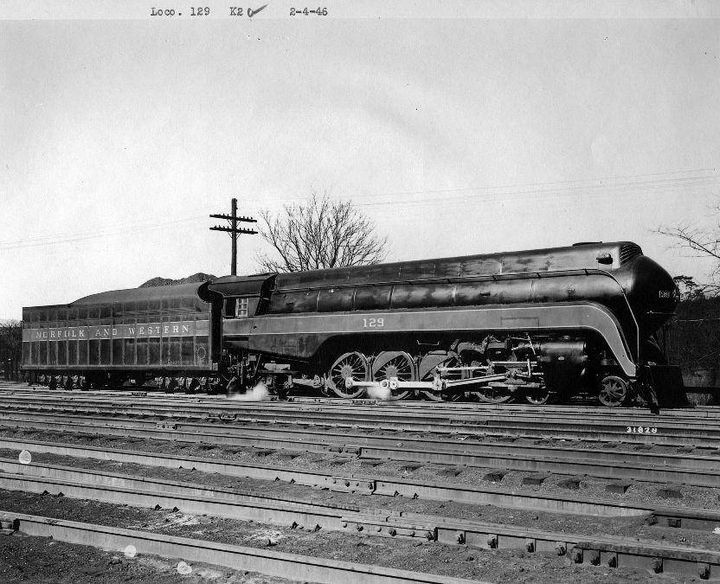 These mighty machines, much older than their 4-8-4 near-twins (they were built by ALCO and Baldwin from 1919 and 1923, respectively), were retired and scrapped in late 1950s.

I know it's a lengthy post but I must recommend you some additional reading - a very personal and touching article by Kipp Teague about the 611's final run.

And there's a video, too: