When a Czech immigrant arrived in Great Britain his claim to fame would not be a successful entry to the firearms canon, but rather an intriguing footnote that showed ingenuity could be matched with reliability.

The never ending search for larger capacity firearms, whether they were pistols or rifles, drove weapons designers during the first four decades of the 20th century. War only accelerated this moves to put more ammunition into a man portable weapon. Josek Vesely created the V-42 and took the basic simple blowback action of a submachine gun, where the rearward movement of the case as propellant gases surged forward behind the bullet, and made it something different.

Instead of trying to tinker with a basic, reliable method of operation, Vesely decided that the magazine design was the thing to conquer. Looking at the image above, you imagine a larger, possibly proprietary caliber round nestled inside the deep magazine. Yet the ejection port, directly above the magazine is narrower. That's because the V-42 fired a standard 9 mm Luger round.

You see, Vesely's magazine was designed  as essentially two magazines in one.

The front of the magazine had a stack of 31 rounds of ammunition. Behind it, a second stack of 29 rounds of 9 mm which remained fixed until the front magazine emptied. A simple blocking mechanism then slipped out of the way, allowing the rear magazine to feed ammunition into the chamber. 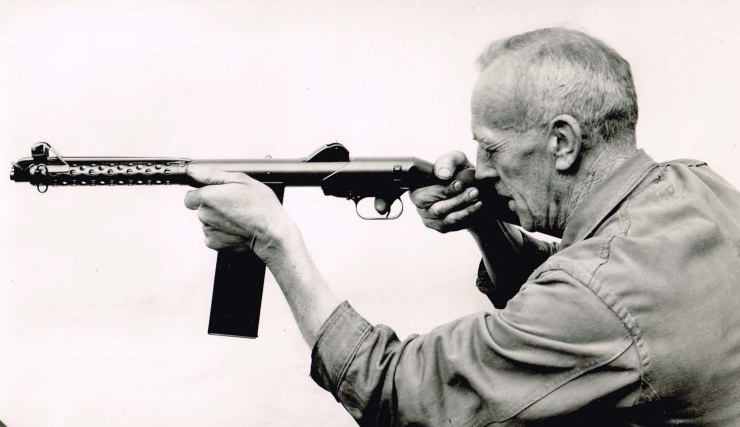 However, the action wasn't entirely neglected by the Czech's imagination. Instead of a single consistent rate of fire, Vesely came up with the idea of a variable rate of fire by a device in the breach block that changed the number of rounds from 900 to 1,000.

A standard infantry version had a fixed wooden stock. While a paratrooper version could be broken down into three major elements.

Never formally adopted by national or local authorities, the V-42 machine carbine is a testament to the tireless inventiveness and search for the next advancement in small-arms technology.