The Art of Ludwig Hohlwein

Let me present a Steam/Diesel era artist whose influence on advertising industry was (and remains) tremendous. A genius who stood at the side of Evil. Ludwig Hohlwein was born on July 26, 1874 in Wiesbaden, Germany and enjoyed a privileged childhood in a prominent family.* While studying architecture at the Technical University in Munich from 1895 onwards, he made his first illustrations for the newspaper of the Academic Architects Association. He designed the association’s program booklets, invitations and book decorations. 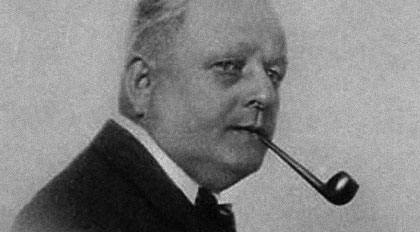 After his studies in Munich and at the Dresden Academy he undertook study trips to London and Paris. Eventually he settled in Munich as an architect. In addition to the interiors of private homes, he took orders for decorating ocean liners.

In 1901 Ludwig married Leoni Dorr. They had two children. In this period he regularly takes part in exhibitions with his prints, watercolors and tempera paintings in the Munich Glass Palace. He developed his unique style early on in his career which showed little changes over the next forty years. Hohlwein left architecture and started focusing on graphic design in 1906. He began as a poster artist, building up a self-taught style which was primarily influenced by the collage technique of the British Beggarstaff Brothers. He was very productive and quickly gained name and fame in the world of graphics and among important clients. Accelerating industrialization in the first decade of the twentieth century turned Germany into a fertile ground for the orientation of art towards industry. The combination of industry and art gets an ideal testing ground in the design of company posters and product advertisements. With Art Nouveau we entered the early modern period rebelling against what is Victorian excess. In the German “plakatstil” (or poster-style) all ornaments and embellishments are further omitted. The simplification is even more extensive, leaving only taut lines. This leaves us with recognizable pictorial references and a persuasive communication, a style consistent with the commercial and technological demands of the age. This new type of poster soon became far-famed. Ludwig Hohlwein in the southern city of Munich and Lucian Bernhard in the northern city of Berlin quickly became the leaders of this ‘Plakatstil’. Between both World Wars Hohlwein enjoyed great popularity. By 1925, he had already designed 3000 different advertisements and had become one of the best-known German commercial artist of his time. In 1923 a New York exhibition of his posters introduced him to the advertising industry in the United States, which earned him commissions for Camel and Fatima Cigarettes. But given the competition he never achieved the same fame in the USA as he did in Germany.

The complex play of light and shade suggests that Hohlwein based his paintings on photographs. During these days illustrators often relied on photographs to record facial expressions, precise movements and gestures, patterns and textures in clothing and décor.

"He first prepares a drawing which follows nature faithfully, sometimes making use of photographic studies to this end. And only after these preliminary sketches does he proceed to evolve a decorative design as a basis for the work at hand."
- Professor H.K. Frenzel He had a signature style of applying colors, letting them dry at different times, and printing one on top of the other, producing modulations of shading. The subject seems to be reduced to coloured surfaces and points, a network of interlocking shapes in a vivid and elegant pallet of colours. Ludwig Hohlein plays with only a few elements, light and dark, foreground and background in his rather sober compositions.

Although the image was always the dominating element, he did not lose sight of his lettering. He used both serif, sans-serif and gothic typefaces, matching them to the subject he depicted. His typography was always readable and grouped in a few lines, often forming a square.

Hohlwein's signature appeared on most of his work. The two diagonal lines which run from the 'ü' in the word München connect his hometown to his name. Over time he gained fame and fortune, and his creations began to serve different needs than merely the promotion of products. He turned his expertise to making billboards for the war effort, accepting commissions from the Nazi organizations. He designed posters for the NSDAP, the Nazi People's Welfare, the Winter Relief Fund, air raid safety (scroll below), and for the 1936 Olympic Games. Students, be the Fuhrer's Propagandists! (1930)

In 1931 he refused the offer to emigrate to the United States. Instead Hohlwein joined the Nazi party in 1933. After WWII he continued his work as a commercial artist in a small studio in Berchtesgarden until his death on September 15, 1949.

Cap'n Tony says, "I always loved Franziskaner hefeweizen and its monk logo. I'll still love the beer even if the artist was a Nazi. A lot of talented people got seduced by fascism, alas."

The trouble here seems to be that artistic talent doesn't necessarily translate into either political astuteness or a personal moral sense that would compel these artists to reject totalitarian barbarism in any form. A lot of talented people were seduced not only by fascism but by Soviet communism, which, especially under Stalin, was just as heartless and genocidal as the Third Reich ever was. For example, the vocal sections of Dmitri Shostakovich's first two symphonies are really embarrassing to modern ears (a "hymn to Lenin?" Yecchh)!

But in purely musical terms, there's no question that Shostakovich was one of the most brilliant and prolific composers of the 20th century.

Regardless, I wouldn't have wanted to live the way he had to live; writing such obvious propagandistic garbage just in order to survive. What was the alternative? Being sent to the Gulag along with his wife and children, that was what! So, a certain amount of understanding of their circumstances is warranted, I think, in some such cases of exceptional artists being born into completely brutal and rotten societies like those two.

Accidents of birth— and so the question becomes, "how did they deal with it?" A question that, perhaps, can't be answered by anyone who hasn't been in such a position themselves.

Same with me. I love Franziskaner (dunkel too!), I admire its label along with many other Hohlwein's paintings and prints. His evolution was rather typical - a patriot during WWI, DNVP/Stahlhelm supporter in the early 20s, Nazi in the 30s. There were thousands like him. Others moved in the opposite direction - for example, Ernst Junger who in the 20s dedicated his book to 'Adolf Hitler, the Leader of German Youth', and got completely disappointed with National Socialism after the victoriuos 1940 campaign.

I always loved Franziskaner hefeweizen and its monk logo. I'll still love the beer even if the artist was a Nazi. A lot of talented people got seduced by fascism, alas.

That's some very iconic looking painting. I really wish I had more time to study art. He might not have been a good person, but at least his paintings are good.

Some truly great images.. Sad that he didn't make as much a splash in the states... I would have loved to see more of his work throughout.

Thank you for the powerful article.  While I can separate a man from his works, this one is still tough, because even the message of the work is tainted.

Dear Pilsner, admiration and despisal are my own emotions when I see any Hohlwein poster. He was a kind of a prophet, creating an important part of Nazi aesthetics long before the advent of National-Socialism. His harmless gentlemen, toying with cars and binoculars, emerged as Neuordnung icons in only a decade. There's a grim magic around his images. And he used it willingly for the benefit of the most horrible political movement. A Nazi bastard, quite right.

I can only "love" this art for the man's obvious talent— but he was still a Nazi bastard! He was the male Leni Riefenstahl or Albert Speer, I suppose. It's possible, strangely enough, to admire such people and to despise them at the same time, for what they so willingly became after what their country became in 1933. There's no excuse, artistic or otherwise, for having aided and abetted the Third Reich.

impressive works. the faces of the characters are showing a huge palette of emotions, but the artist indeed uses only basic elements. great achievement. thanks for the insight, Lord!