In the world of pistols the .45 ACP still hold sway over all other semi-automatic handgun calibers. Sure there is .357 Desert Eagle. And 10mm from Glock burned a few hundred pages of gun magazines in the 1990s. But outlasting them all is the .45 ACP. Designed in the first decade of the 20th century, the .45 ACP round is still loved by gun enthusiasts everywhere, including those in pre-revolution China.

Warlord General Yen Hsi-Shan was a man who loved firearms. He understand that they were going to provide the power that his men could use to enforce his will upon Shansi Province. Yen also knew that to properly equip his forces he needed a steady, reliable flow of arms, leading him to commission the opening of the Shansi Military Technology Practice Factory.

Weapons of any type could be reverse engineered by his craftsmen, leading to production runs of good quality firearms. The first was the Chinese copy of .45 ACP Thompson submachine gun, an automatic weapon wielded by Yen's armored train guards as goods moved around the mountain province.

Yen also armed his men with the C96 Mauser, the famous pistol used by Winston Churchill during the Boer War. Yen's men however went to war with a pistol chamber in 7.63mm and an automatic pistol caliber weapon in .45 ACP. Two pistol calibers meant twice the problems in procurring or producing the ammunition needed for forces in the field. Yen, it is said, decided his men needed one caliber, he chose the .45 ACP. 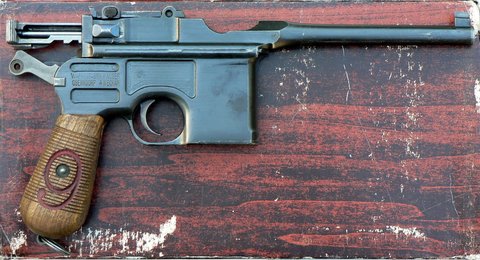 The C96 Mauser was born in the late 19th century and became the world's first widely fielded automatic pistol. The pistol was chambered in 7.63mm and later 9mm, used in conflicts from the Spanish-American War to Vietnam. The Mauser was solidly built and reliable, all one can ask in a weapon. The pistol operated through short recoil where the bolt block locked into the barrel extension. When the round fired the rearward forces moved the bolt and barrel extension back two millimeters. A locking mechanism beneath the bolt slid downwards slightly, unlocking the bolt, allowing it fully recoil and cycle out the old case and return with a fresh round.

The original 7.63mm ammunition was relatively light and had a high velocity. But the .45 ACP had the reputation of one shot stopping power. The bigger the bullet, the better mantra excited gun designers and weapon-philes, soldiers and bandits alike. In Europe 7.63mm was plentiful. But to Yen, he wanted one round that was easy to get and he already had one, the .45 ACP. Everything needed to be scaled up to accommodate the larger ammunition, resulting in a pistol larger than its cousin. It also had a magazine of 10 rounds, but due to the larger diameter ammunition, the magazine well extended below the trigger guard. Loading of the Mauser .45 ACP was achieved by five-round stripper clips, also made by the Yen arsenal.

While the exact number of Type 17 .45 ACP Mausers produced isn't clear, it is safe to assume that Yen's factory could have produced the widely believed 8,500 + units.

When the warlord period ended and the Communist Revolution took over, the remaining .45 ACP Mausers were put into storage before being melted down in bulk.

I'd love to  see HI-Point or Rossi start  cranking  this gun  out  today. Stripper  clips  are  cheaper  than box  magazines.

love the design of this handgun,plus the artists at Bethesda Softworks really got this gun spot on for fallout 3.

"melted down in bulk." = Could any story end any sadder?

I heard about this gun a few years ago on a Serenity RPG board (somebody had one of their characters carrying a gun based on the .45 version). The .45 Shansi Mauser also had a combination wooden holster/carbine stock that gave it the nickname "The Boxed Cannon".