Fall is just about here in the States, and that means Halloween is right around the corner.

It's time to bone up on your Edgar Allan Poe, Godfather of late-Victorian horror. 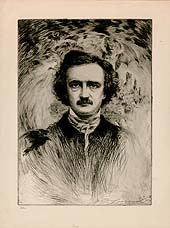 The Harry Ransom Center of the University of Texas now houses a rather large digital archive of manuscripts and letters created by Edger Allen Poe. Named The Edgar Allan Poe Digital Collection, it was launched to accompany the 2009 Poe Bicentennial exhibition, “From Out That Shadow: The Life and Legacy of Edgar Allan Poe,” and includes the manuscripts of “The Domain of Arnheim,” “The Spectacles,” and some of Poe’s most famous poems, letters written by and to Poe, books belonging to Poe (including the author’s annotated copies of the Tales and Poems and Eureka), sheet music for songs based on Poe’s works, and various portraits of Poe. The Koester Collection was acquired by the Center in 1966.

Most of the collection from the exhibit once belonged to William H. Koester (1888-1964), who lived in Baltimore and began collecting Poe items in the 1930s.

Check it out at http://research.hrc.utexas.edu/poedc/