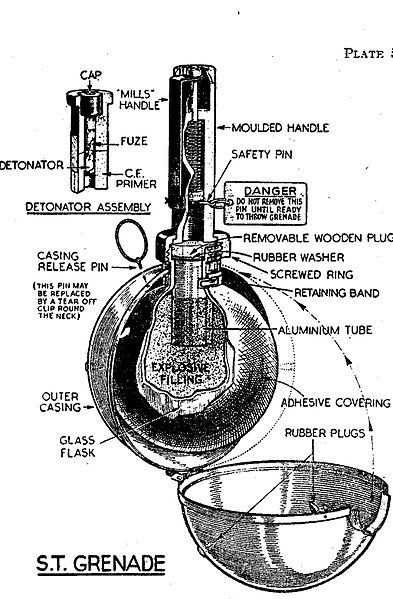 Sometimes great weapon ideas don't always work in practice. If you are an army, needing simpe yet effective anti-tank weapons the idea of an adhesive grenade seems a good one. However, when the grenade is so sticky that it could end up clinging to your clothes in the seconds before detonation, the ideas quickly becomes bad.

The No.74 ST Grenade, aka Sticky Bomb, was put into the field by the boffins of the British war offices design and development bureau as a way to defeat soft-skinned or lihgtly armored vehicles. 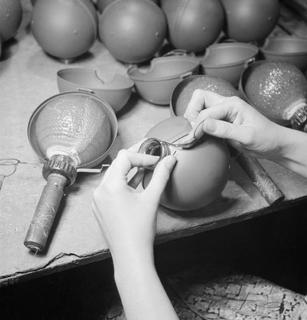 A glass bulb, about the size of a large orange was filled with 1.5 pounds a semi-liquid nitroglycerin. The bulb was then stuck to a bakelite handle that encased the fuse assembly, safety lever and pin. Shrouding the fragile glass bulb was a stocking soaked with what is known as birdlime, an extremely sticky form of lime.

To keep the adhesive soaked stocking clean, an outter shell was fabricated to encase the bomb head. Roughly the size of a large grapefruit, the outter case was held in place by a second pin.

Getting it to work as designed as another story entirely.

In the field, initially it was hoped the sticky grenade could be hurled at a target, adhere and then explode. What is planned in an office doesn't always translate to the field. It was learned that the sticky grenade head could get dirty and would not fix to the side of a dirty vehicle.

However, it was used somewhat effectively after Australian troops realized that hurling the adhesive ladened grenade at a target didn't work as well as rushing the vehicle and hand placing the No.74. A photo of that training method can be seen below. 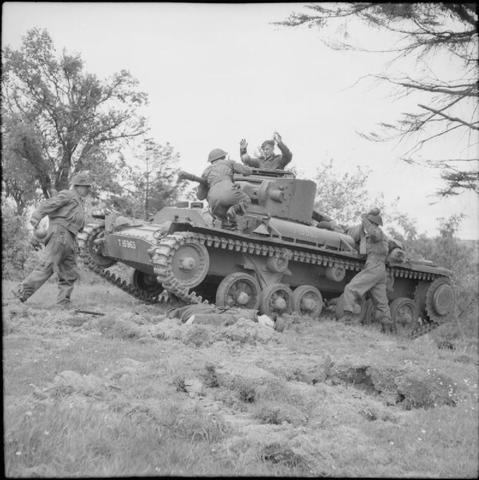 The operation of the Sticky Bomb was simple. The first pin was pulled, releasing the protective clamshell. The second pin was yanked, freeing the safety lever, igniting the timed fuse. An operator had five seconds to get the pin pulled, grenade stuck to the target and beat a hasty retreat to safety.

Some 2.5 million Stick Bombs were produced by the end of World War II.

Very wittily! In addition, infantrymаn don't be afraid of a rebound its own grenades when he had only 5 seconds.

Nifty piece of equipment. So many of the cool ideas in dieselpunk (and related themes like steampunk) are cases of "what if this was actually practical and/or worked the way it was intended, instead of being horribly impractical like it was in the real world". This fits to a T.

I swear this sounds like something from a Monty Python sketch.

Reminds me of the homebrew ones in Saving Private Ryan...didn't know someone actually tried to make them!