A simple backwoods gun, something that has two calibers that can handle anything you throw at it. A true American style firearms coveted by woodsmen that roved the continent for hundreds of years. In Europe 'Drilling" guns are well known. Here in the US they're a bit more a niche, something you carry as a backwoods back-up, than a primary hunting tool. One such light and handy little weapon was the Marble Game Getter.

Born in the early 20th century, the Game Getter was created by a Michigan arms manufacturer with a simple design. Two long barrels, one atop the other, anchored at a pistol like receiver, with a simple skeleton buttstock for aiming accuracy.

A break-open weapon, the Game Getter was designed for .22 caliber pistol ammunition adjacent to a .44 caliber 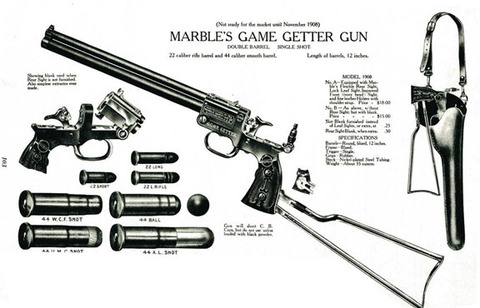 smooth bore chamber. The .22 could handle several types of .22 ammunition, from .22 Short to .22 LR. The .44 caliber was essentially a shotgun, firing a number of shells, including a single .44 caliber ball. Later versions could load and fire .410 shotgun shells.

Three versions of the Game Getter have been built by the Marble Arms company, each slight updates for a new generation of consumer.

There were smaller numbers of rifle caliber Game Getters produced in addition to the .22/.44 combination. Due to its layout as essentially a long barreled pistol, the Game Getter could be slipped into a long cavalry style holster with the wire stock folded.

A smart and innovative element to the Game Getter was its single pivoting hammer. The hammer spur and shaft worked as with all firearms. The robust pin attached to the hammer assembly was a bit different. Instead of relying on two hammers to fire the two rounds, the Game Getter had a stout pivoting external pin that moved up or down to engage the chambered rounds.

Whether it was was hunting for small game while out packing, or dealing with a bigger woodlands predator, the Game Getter was a unique early 20th century firearm.

Thanks folks for the kind words. These kind of little gems exist in every corner of firearms history.

Pablo, you're correct about the LeMat being a tandem caliber pistol, but the LeMat was a multi-shot revolver primary with a .410 shotgun mated to the .44 barrel as a secondary. And the idea of two caliber/single shot firearms has been traditionally more popular in Europe rather than U.S.

As a modern firearms aficionado its all about velocity and capacity. Here its about simplicity and reliability.

really not an idea so innovative, original revolvers Lemat French also used a similar system. What the folding stock is very interesting, it seems the same system as some modern submachine Carl Gustav. And thanks, as I had no idea of the existence of this weapons manufacturer