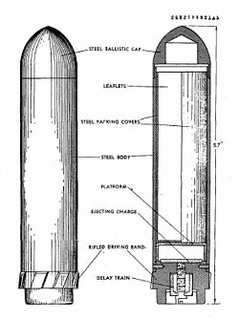 Through psychological warfare from antiquity to the modern age, military leaders have used words and images to leverage myths, fear and hopes to influence their enemies.

During the Second World War propaganda both in radio and printed forms reached their cultural pinnacles. And it was in Germany where tactical level psywar was dispensed at the end of a gun.

Rifle launched grenades were used in numbers by both Allied and Axis forces during World War II. They took varying forms, from smoke grenades to obscure movements or High Explosive fragmentation designed to kill.

The German "cup launcher" was the Wehrmacht's answer to a device that clamped to then muzzle of their service K98k rifle (bottom right.)

The short tube acted a stubby barrel, rifling on the inside promoted an accuracy inducing spin. In addition to those deadly grenades, the Germans crafted a simple grenade that when fired at the enemy, popped open and dispensed leaflets rather than death.

The 5.5 inch grenade was a capped hollow tube with a propellant charge in the base that ignited upon the rifle firing. The rifled base, fitted into the cup launcher, induced a spin as the grenade flew out to distances around 500 yards.Constructed with a steel cap and body, the grenade has a red band around its base to distinguish it from other grenades. A delayed fuse inside the grenade waited approximately nine second before pushing a small plunger forward. Inside the hollow tube were propaganda leaflets, bottomed with a cardboard disc.

The leaflets were rolled inside the tube, encased in a two piece internal sabot. As the ejecting charged pushed forward, the leaflets would spill out and disperse in the air as the grenade tumbled out of flight.

Comment by Jake Holman Jr. on August 26, 2010 at 11:12am
I endeavored to find the smaller leaflets but to no avail. I think tactical psyops can prove persuasive, depending on your audience. Something as simple as a surrender now or die works. Sieges in particular. General fear and potential mayhem are effective psychological weapons. Grenades appearing overheard, nary a noise to alert their arrival, leaflets fluttering to the ground with any number of hopeful or ominous messages. Very effective, especially against civilian populations.

Comment by D.T. McCameron on August 26, 2010 at 11:07am
Aye, what sort of messages could they have possibly decided were best delivered via grenade?

Comment by Tome Wilson on August 25, 2010 at 4:36pm
I've only seen the one-sheet propaganda posters. I wonder what the leaflets that blew out of these looked like.