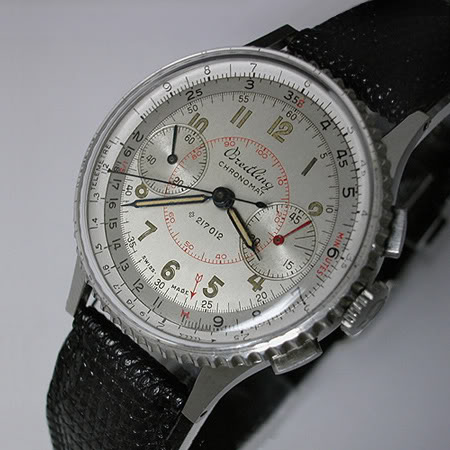 Six years earlier, a small Swiss company applied for a patent for Wrist Computer design, humbly called a slide-rule wristwatch, christened Breitling Chronomat. It was not the first slide rule watch in history and of course not the last one. If you want to know what the slide rule watches are for and where they come from, Art Simon's article is highly recommended. 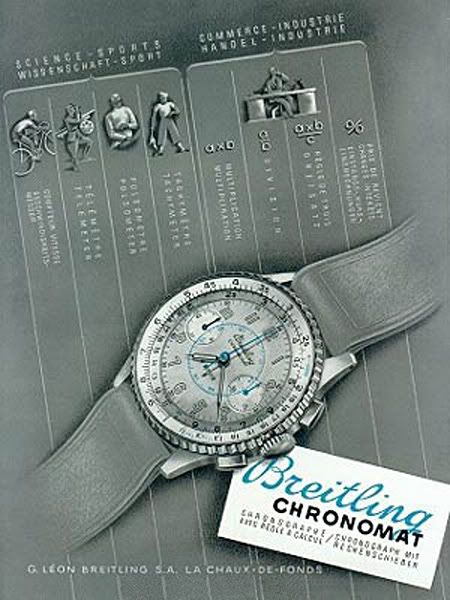 "The Breitling Chronomat with its rotating slide-rule was patented in 1941 as war raged through Europe and other parts of the world, its design offering a welcome respite from the plethora of military and military-inspired watches of the period. The Chronomat's emphasis on engineering and mathematics, science and industry seemed to offer hope for a future when the war would be over and reconstruction could begin", - writes Alan Trott in his brilliant Chronomat History. It was a timepiece designed for scholars and builders, not for shooters and fighters (although I can easily imagine an artillery officer using the slide rule to a great and devastating effect). 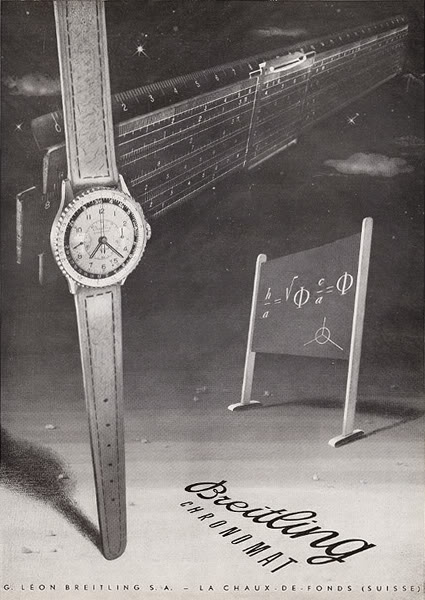 "It is generally accepted that the Chronomat made its public sales debut in 1942" - Trott continues - "and this is the date that has been quoted for many years by the Breitling company. The circular slide-rule design of the Chronomat has come to be known as the 'Type 42' to differentiate it from the 'Type 52' slide-rule first seen on the Navitimer supposedly in 1952... The 1940's Chronomat is regarded by many collectors as one of the most attractive Breitlings ever made, a true classic." 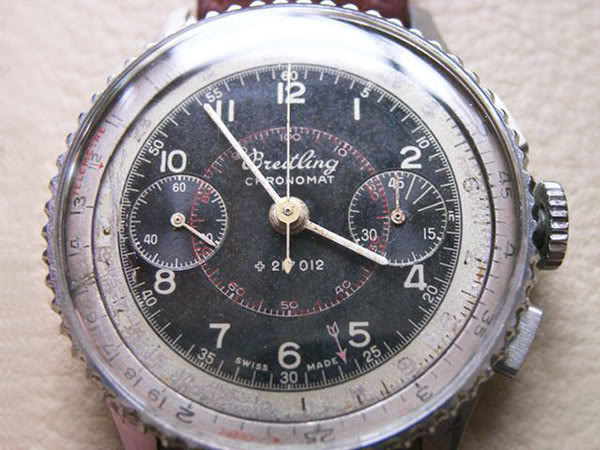 The heart of the Chronomat was a 17-jewel Venus 175 caliber, with a centre chronograph hand recording seconds, a minute chronograph register at 3 o'clock recording up to 45 minutes, a running seconds hand on the sub-dial at 9 o'clock and without Incablock shock protection 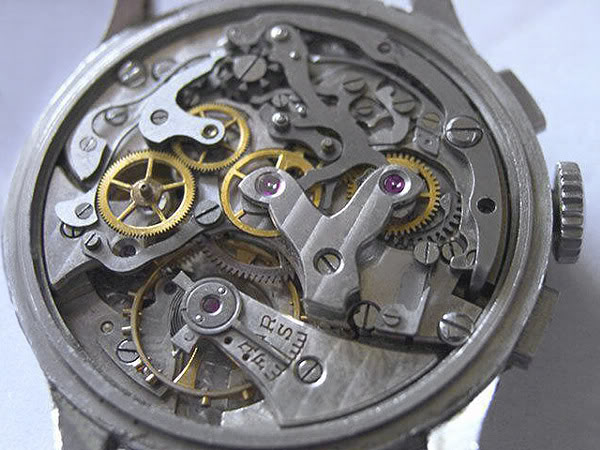 Here are some photographs and advertisements. 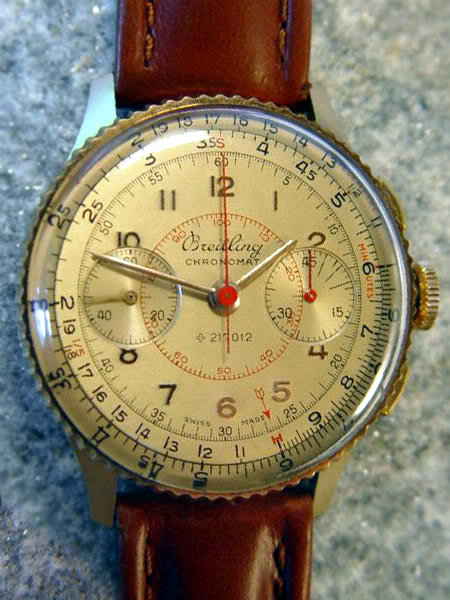 Advertisement for the Chronomat Moon Phase, a wonderful watch - and a wonderful example of 1940s graphic design! An advert from 1947 shows César Romero, a Hollywood star under contract to 20th Century Fox, with a Chronomat and two other Breitlings: 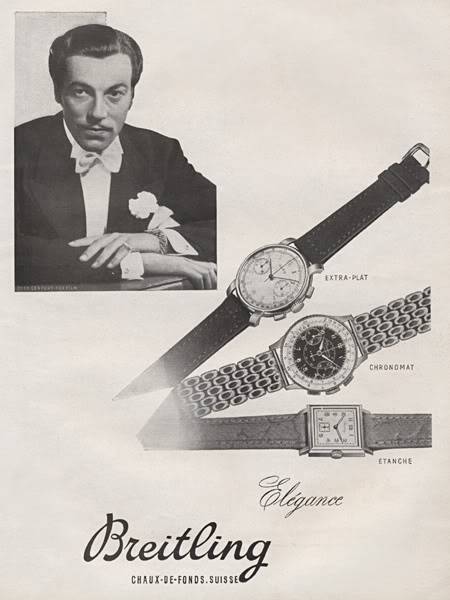 A 1950 advertisement for the Chronomat, Duograph and Datora shows only the dials and hands: 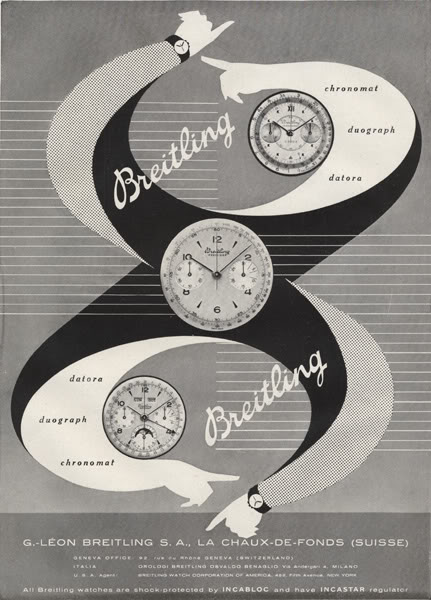 Detail of the Chronomat dial in the 1950 advert. This dial variant, if indeed it was ever produced, is very rare: In the early 1950s, the Chronomat dial was redesigned with the arabic hour markers being replaced by applied polished batons with double batons at 12 o'clock. The Swiss patent number +217012 on the dial was now curved. The model ref was still 769 and the movement remained the Venus 175: Chronomat remained in production in the 1960s and 1970s. It underwent some design changes, retaining the 175 movement. Not as famous as the Navitimer, its younger relative, it still enjoyed a limited success even in the pocket electronic calculator era. But in 1978 Breitling went bankrupt and ceased production. Next year, the company was put up for sale and in 1984 the Chronomat brand reemerged - alas, as a completely new model without a slide rule. 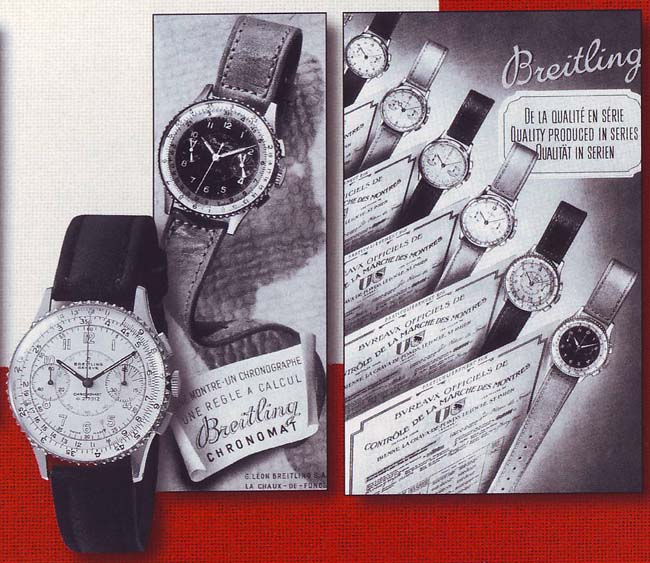 In the modern Breitling line-up there are some limited editions paying homage to the old Chronomat. For instance, Chrono-Matic: 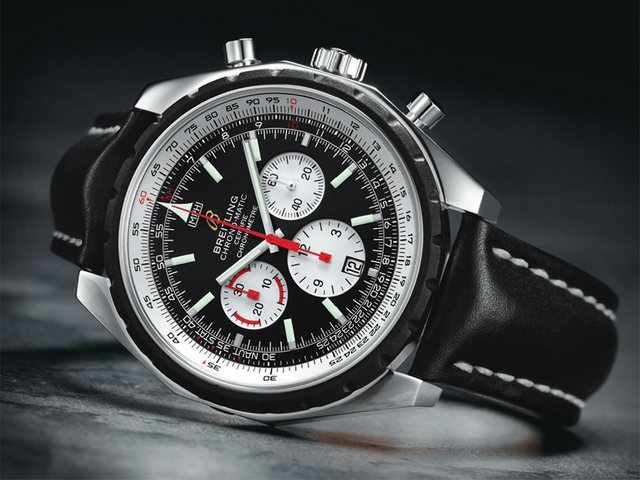 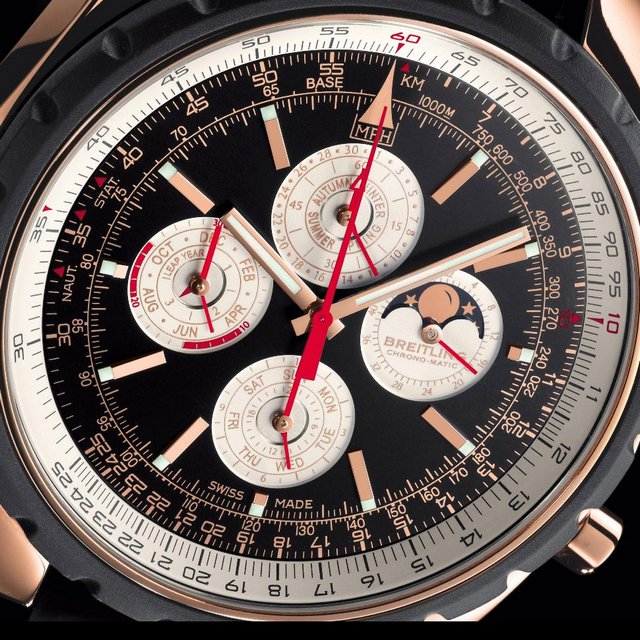 and Montbrillant Legende from the Navitimer Collection: 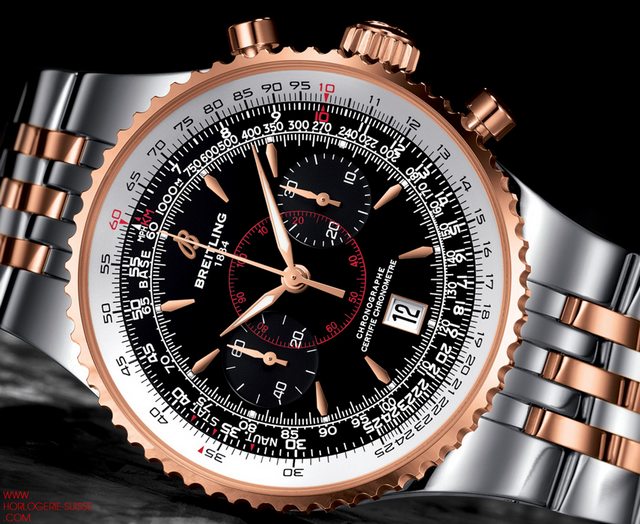 NB: This blogpost should not be regarded as an advertisement for Breitling. Quite the opposite: in my personal opinion, present-day Breitling timepieces are overhyped and overpriced. For each and every one of them you may find a decent substitute of equal or even higher quality - and pay much more reasonable sum. Reasonable, but still high. Well, 60 or 70 years ago a decent Swiss wristwatch was considered a kind of luxury and was purchased for life in any sense of the word, not for frills.

Comment by lord_k on September 27, 2010 at 10:55am
To Deven:
I've got a (probably stupid) prejudice against fake watches, but perfectly legal Breitling-lookaliles can be bought for a fraction of the "original" price.

Comment by Deven Science on September 26, 2010 at 1:19am
I have seen many faux-Breitlings here in Afghanistan, and I was considering picking one up, as they are all much nicer looking than the Rolexes and Omegas that they have here. I already bought a beautiful TAG Heuer. These are approx 1% retail price.